“Electric guitars, bagpipe and whisky: Celtic rock as it should be” 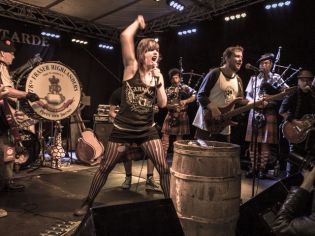 Formed in 2009 in Quebec city (a French speaking province of Canada) as a covers band playing traditional Irish songs but with a punk feel and attitude  and they’ve now gone on to develop into one of Canada’s best new celtic-punk bands. This their debut album  has exploded across the globe and brought them to everyone’s attention with reviews from your usual suspects like Celtic Folk Punk & More and Celtic Music Fan to loads more with no connection to celtic-punk. 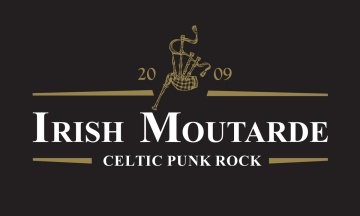 Combining the usual punk rock instruments with banjo, mandolin and highland bagpipes, on my first listen they instantly reminded me of a celtic-punk NOFX. Rapid drumming and the up-tempo songs add a touch of rock, punk, celtic and even metal yet it all remains totally accessible in that unique celtic-punk way so that your punky mates as well as your mammy right down to yer wee nephews and nieces would love it. Of course it helps that the vocals are both crystal clear and perfectly sung whether on the ballad ‘Glasses To The Sky’ or the most NOFXie song ‘The Black Mill’. The most unusual thing about IRISH MOUTARDE is that they have duel male and female vocals. In a scene where the audiences are split evenly the actual bands with female vocalists are few and far between, BRUTUS DAUGHTER from Spain/Astures being the only one that springs to mind, most females are confined to fiddle or tin whistle duties and the only usual times you hear female vocals are when someone is guesting on a album! 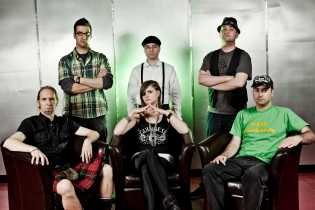 Fields Of Athenry’ and ‘The Wearing Of The Green’ are the LP’s only covers the rest is all self-penned and mostly in English. The lyrics are mostly about drinking and rebellion. Dominant themes in celtic-punk I know but what the fucks the matter with that I say! The bagpipes are a ever present and it goes without saying are what pushes the album into celtic-punk territory. The Irish diaspora over here in our tiny bit of western Europe never really ever embraced the bagpipes as they did in North America and although I do prefer the sound of the Irish uilleann pipes its the Scots bagpipes that were made for accompanying loud and rocking punk and rock music. You can hear bands like the DKM’s and Real McKenzies in there but they have made the sound their own and in a scene where it is increasingly hard to be original that is a incredible thing. Twelve tracks in all and not a disappointing one among them and the fact that they even managed to do ‘Fields’ without it being a clone of anyone else’s version puts this LP into the classics section already!

Three Interesting Whisky-Fuelled Band Facts:
1. The name Irish Moutarde was chosen because it is a pun on the French expression “relish-moutarde,” which the founding band members felt the name was (and still is) humorous, light and expressed their musical quality.
2. The band’s mascot is Olaf the Irish Giraffe, who was created by fans of the band Julie Lévesque and Guillaume Racine. The sixth song on their debut album is a tribute to this whisky drinking, green metal giraffe who sports a long white mane and long white goatee.
3. Their first original song was based on a song from one of the novels that inspired the hit TV show Game of Thrones. The song came out a year before the show debuted.