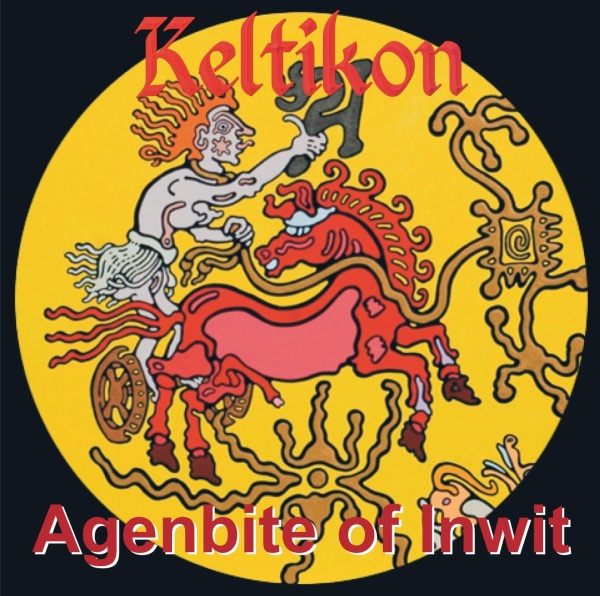 Just recently we reviewed the debut album from Rovers Ahead , who are an  amazing celtic-punk band from Denmark (see here). Well the reason we bring that up here is their lead singer is from Dublin and Keltikon, despite hailing from Zurich in Switzerland, also have a celtic singer in Iain Duncan. That a 2nd generation Scot should wash up in Switzerland should come as no surprise as people from the celtic nations spread out in further directions than just the usual routes of the America’s or Australia/New Zealand and bring with them the knowledge and know-how and, lets face it, a extra bit of authenticity to celtic-punk bands out there in Europe.

Formed in March 2012 Keltikon have wasted no time in their short existence and their debut album hit the shelves in February of this year. The title of the album ‘Agenbite Of Inwit’ is an old-English phrase meaning ‘Again, a bite of inner wit’ or, put into modern terms, a crisis of conscience or remorse. Taking traditional Scottish and Irish jigs and reels, celtic songs and ballads Keltikon spice them up with their own recipe of punk and rock to come up with something relatively unique to these ears!

The album begins with the title track and with the bass thundering away it starts as any pop-punk record only for the bagpipes to kick in and once again i’m left marveling at the expert pipe playing involved. The band describe it as thus

The song also has a jangly guitar feel to it reminding me of bands like The Wedding Present. They slow it right down for the following track with flute taking the lead on ‘Bonnie Ship The Diamond’, an old Scottish song popularized by Scots folk legends The Corries and more recently , the German celtic-punk band, Fiddlers Green. ‘Seven Ships’ comes next and has a real northern English folk feel to it. Traces of The Levellers too, at their best I hasten to add. ‘The Mariners Tale’ is a spoken word piece done in the style of old English TV programme Jackanory, telling the tale of a nuclear submarine called The Diving Dutchman. The story continues in the next track also called ‘The Diving Dutchman’ and steams along at a good old rate in the albums punkiest song. ‘Away To Fight’ is a beautifully slow acoustic ballad telling the tale of the WW2 invasion of Normandy beach in the words of a soldier about to disembark. 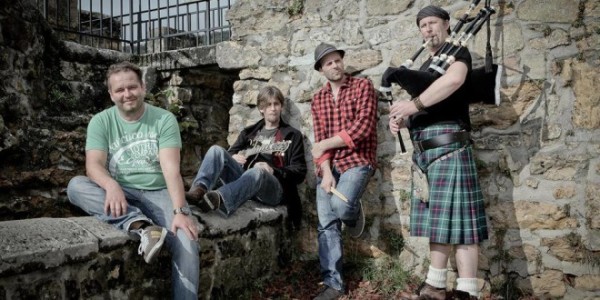 ‘The Blackbird’ a traditional Irish reel whizzes past with the band not missing a beat and the pipes in truly outstanding form. That we have returned to feudal times is the theme of ‘Hold On Tight’ another slow acoustic ballad, the female backing vocals a nice touch. The fiddle is to the fore in ‘Each Others Dreams’ a rather poppy song that never really gets going in the way you’d expect it to leaving  the epic ‘Taliesin’ to close the album. At nearly ten minutes long its pretty risky but completely works as all the band members get a chance to show what they can do and none come up short. Taliesin was a renowned Welsh bard who is believed to have sung at the courts of at least three Brythonic kings and lived during the 6th century. It has a bit of a prog-rock feel to it and comes in waves getting louder and louder building up to a crescendo and despite its length does not outstay its welcome.

With ten tracks and clocking in at just under a hours worth of music it’s great value and even though the tracks are quite lengthy it never drags for a second. The various elements of celtic music are all represented so this album will appeal to anyone with even the slightest interest in celtic music.

Tagged: Fiddler's Green, Keltikon, Rovers Ahead, The Corries, The Levellers