ALBUM REVIEW: THE PORTERS/ THE JUDAS BUNCH/ THE MAHONES/ MALASANERS- ‘Welcome To The Folk Punk Show’ (2014) 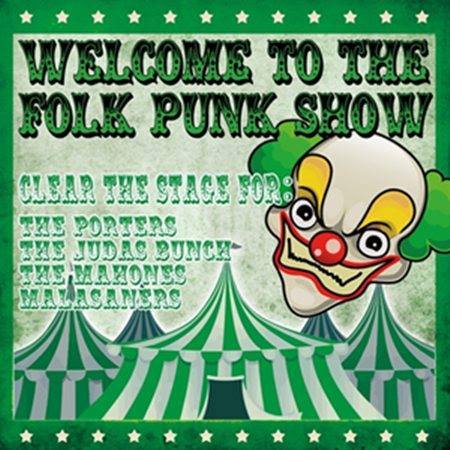 I’ve noticed lately that vinyl is becoming more and more popular within the celtic-punk scene and it’s more recent releases. Not just ordinary vinyl either but the really heavyweight discs that are the super duper best quality you can get. Like the those early Dubliners albums your Da’s got indoors. Still though a bit of a shock though when this, ‘Welcome To The Folk Punk Show’,  landed on our doorstep… well when the postman handed it to me anyway! A four way split, double album of two of the scene’s biggest and best bands and two I had never heard of was not what I was expecting.

This double album starts with The Porters who along with The Auld Corn Brigade and Mr Irish Bastard are at the forefront of the German celtic-punk scene which is probably the biggest in Europe. With three albums tucked into their belts already this five piece from Düsseldorf have traversed Europe with their folk-punk-country sounds. They’ve admittedly moved away a little from the overt celtic-punk roots sound of their debut album ‘A Tribute To Arthur Guinness’ but The Porters sound is still recognisable and is all the better for bringing in a few wider influences.

Next up are The Judas Bunch who hail from Sweden. They call themselves call ‘Honky Tonk Punks’ and I have to say I really enjoyed their three songs. Fast Rancid style punk rock with the accordion very much up front and very good female vocals to boot.  The singer has a uncanny American accent so it should be no surprise that their mixture of punk, folk, celtic and country has, despite them being relatively unheard of, seen them touring the USA a couple of times already. A band to be filed with others like Old Man Markley or Nowherebound or even Social Distortion I’d say. 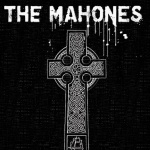 Coming round the bend now is the album’s biggest hitters. Yeah its The Mahones. All the way from Canada is the celtic-punk scene’s most prolific and hardest working band. Fresh from releasing a live album and the first part of their new double album ‘The Hunger And The Fight’ they include three live tracks for this comp and they are all Mahones super standards. The recording is crisp and clear and shows The Mahones at their raucous and rowdy best! Not much to be said about The Mahones as everyone has seen them play and everyone owns at least a couple of their albums so you know how brilliant they are!

Finally closing the second disc with their trio of songs are  Malasañers who are named after a district of Madrid in Spain. Two of the band are from Spain while the rest are German and the band now reside in Germany completely. They play lovely Irish style celtic-punk with clear vocals in English. They may not have  been together very long but it certainly doesn’t sound like it on these recordings. These working class madrileño musicians certainly bring their music to life and supply two fast numbers and one slower one. They have one album already under their belt ‘Spanish Eyes’ and it is well worth picking up.

The whole package is beautiful with both the music on the discs and the sleeve artwork as good as it gets. I would get a wiggle on though as there’s only 500 of them and once they’re sold out that will be it. No more will be released. My only gripe is that for such a Irish influenced project why the disc’s on orange vinyl!! A very minor gripe as they look wonderful. That shouldn’t put anybody off as clocking in at forty minutes it is great value and very reasonably priced as well. Wolverine Records are to be congratulated on putting out such a work of art!

Side A:
THE PORTERS
1.Barfly 2.Fathers And Sons 3.Hellbound Lovers
THE JUDAS BUNCH
4.Honkytonk Punks 5.Hey Bartender 6.Jim Dennys Diner
Side B:
THE MAHONES
1.Great Night On The Lash 2.Paint The Town Red 3.Blood Is On Your Hands
MALASANERS
4.Rights 5.Immigrants 6.For A Pint

you can get the album from www.wolverine-records.de at this link here.

2 thoughts on “ALBUM REVIEW: THE PORTERS/ THE JUDAS BUNCH/ THE MAHONES/ MALASANERS- ‘Welcome To The Folk Punk Show’ (2014)”