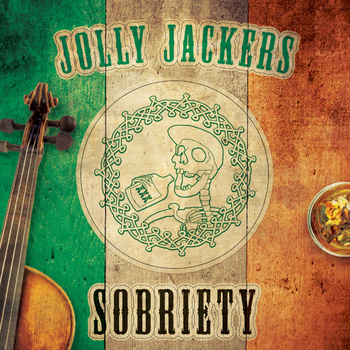 Hot on the heels of our recent review of The Scarlet’s new EP arrives the new album from another Hungarian band the Jolly Jackers. Writing that review of the The Scarlet’s EP (here) I commented about how good the celtic-punk scene in Hungary is at the moment with bands like The Scarlet, Firkin, Loch Nesz, Paddy And The Rats, to name but a few, and lo and behold straight after another grand Hungarian celtic-punk album lands on my doorstep. The Jolly Jackers hail from Dunaújváros a working class city in central Hungary famed for its steelworks, which is the largest in the country. They have only been going for a little over a year but in ‘Sobriety’ they have produced an absolute belter of a record and, even better for you the punter, they have made it available for free download as well.

They already had a fantastic EP under their belts titled ‘Call The Captain’ that they released in March last year and is also available for free download. (Simply click on the EP record sleeve to be re-directed). ‘Sobriety’s’ nine tracks are all self penned with the exception of an excellently played cover so once again my hat goes off to the band for that. It’s often too easy to pad out your records with covers so its good to see more and more bands writing their own material. The only minor gripe I have, and to be honest it is only a gripe as I wanted to hear more, is that the record flies by so quickly. The Jolly Jackers keep up such an almighty pace all the way through you’ll be breathless as well by the end.

The first track begins with tin whistle before crashing guitars and fiddle take the title track ‘Sobriety’ off into territory far away from the Mollys or the Murphys and finds The Jolly Jackers finding their own sound.

‘Sobriety’ is not a subject much heard in celtic-punk but don’t worry the bhoys and ghirls are not Pioneers and next track ‘Whiskey’ kicks off sounding like a ballad till the fiddle and some pretty amazing bluegrass style banjo underpinnning the tin whistle in a story of bar-flies. ‘The House’ takes us on a scary Halloween tale of a haunted house with whistle and chugging guitars.

American country influences on ‘Hey Johnny’ and yet more punk rock banjo make this one of the album’s standout track for me. ‘The Train Never Stops’ is a sad song with mournful whistle and acoustic guitar about the death of a friend of the band through addiction.

“I still can hear Tommy’s laughs, now he’s on a train that never stops”

After that emotional ride ‘Get A Life’ grabs you by the throat and shows the Jolly Jackers can ramp it up and play a bit of good old-fashioned punk rock. Starting off like an classic punk song slowly the celtic instruments are introduced and this catchy as hell track would have pleased any of the celtic-punk scenes big hitters to have written. ‘Gold Rush’ is another catchy number with the bands elements coming together very nicely. The albums only cover is a well played version of ‘Star Of The County Down’  and even though it has been covered a fair few times its a great version and extremely well played. I think it would have been a nice touvh for the band to have sung ths in their native language personally. The album ends with the brilliant ‘Call The Captain’ a live acoustic version of the title track from that first EP. With influences from their native country on first listen it sounds a bit chucked together but listen again and you hear the intricacies involved.

All in all a very solid first album and different enough from their fellow Hungarian bands to plough their own furrow. Jolly Jackers certainly have the songs and musicianship to go beyond their own borders and I can definitly see them following Paddy And The Rats onto bigger things. Is this the year of the Hungarian band? Well two reviews into 2015 and they are both Hungarian so it would seem yes!

(press play below to hear the complete album)