RED ROSES FOR ME AND ME

How one man fell in love with The Pogues 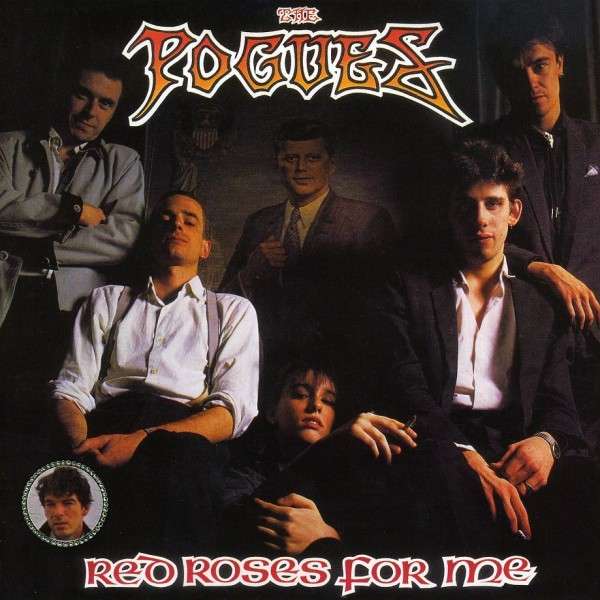 There is certain things that are so momentous in life we remember the exact moment they happened, where we were, who you were with , the colour of our underwear. For a great number of people of a certain age it was “Where were you when Kennedy was shot ?” it sounds a little like having to provide an alibi but the truth is that people do remember as it was a big deal. Now it might not just be something so international as that,  it’s personal stuff too. Do you remember your first kiss ? your first day at school ? when you popped your cherry ? these things matter and they are worth remembering. I remember a lot of that kind of stuff and I also remember the soundtrack to things.

You know that thing when you hear a tune on the radio and you connect it to something in your life ? all the memories come flooding back because they are what you associate with it. Well my soundtrack runs to the Pogues and a lot of the good the bad and the ugly times have a song that corresponds and yeah I can actually remember where I was and who was with me the first time I heard them. I want to talk about the Pogues now and why they are the soundtrack to my life and why I love them now as much as I did when I heard them first.

My favourite childhood memory is of Sunday mornings. My mother would play her vinyl collection on her record player and it’s sounds would fill my bedroom up and tear me from my sleep. The playlist varied a bit but usually included music by The Wolfe Tones, The Dubliners, Count John McCormack , Percy French , Paddy Reilly and The Furey brothers. In an odd twist as Christmas approached Mario Lanza would be added to the playlist in stark contrast to everything else. So I would be roused and make my way to the kitchen, the wonderful odour of sausages and eggs filling my nostrils as my mother cooked up a storm in the frying pan. But in anycase among the vinyl was a collection of Irish folk songs and one of the tracks was a version of  ‘The Auld Triangle’ by The Pogues. So this is where Shane MacGowan and I met for the first time. I wouldn’t say it was love at first sight but there was a definite attraction. That wonderful distinctive voice, the understated piano, the rolling percussion oh I was a young lad but my ears worked quite well and it was as if Shane had served his time in that cell with Behan so well did that song translate I had a feeling there was more to these Pogues and to this bucko MacGowan. So I requested that my mother add  ‘Red Roses For Me’ to her vinyl collection and eventually she did and that’s when this attraction I had to the Pogues turned into a full on love affair.

Transmetropolitan hit me like train coming out of a dark tunnel. The line was cast and I was reeled in. That album crept in through your ears and nose and occupied your brain. The songs that you heard before were reworked into such away they sounded new and different and exciting. Waxies dargle came in like a hurricane ripping and tearing at you as it was sung and screamed like an assault on you this wasn’t music to sit and listen to, this was a force of nature you danced and found something to batter the table with to keep time with the beer tray that served as an instrument in the song you were a part of the experience not just a spectator.. There was no time for drawing breath because ‘Boys from the County Hell’ let rip next, it always put me to thinking that mean faced gunslinger from the spaghetti westerns Clint Eastwood would have had it as his theme tune if he had been riding the plains of Tipperary rather than the wild west of America. My mother never approved of the wee bit of profanity and mention of ‘hoors’ as she is a good Catholic woman but she turned a deaf ear to it all the same and I was allowed to bring my own family and all the neighbours in hearing distance with me on my journey through the dark streets of London to that wonderful place Brendan Behan had made his home where streams of whiskey flowed. It was magical.

The music was familiar yet new, it walked a tightrope between sheer chaos and awkward control. It was Irish music but by God it was more, it was evolved and alive and although there was the misty eyed beauty of Kitty that you could imagine a Sean nos singer giving an encouraging nod too if you were by the fireside in your local pub it was in the organised chaos of the upbeat songs that the true beauty was the unbridled joy of drinking and shagging and living hard was layed at your feet it was raucous and untamed and bloody primal it made you want to drink those 15 pints of beer and howl at the moon with the guttural roars of ‘down in the ground’ but mostly it made you feel alive and pretty happy you were as it happened no matter how bad things were. A lot of Irish folk music was of the dead patriot strain which pulled on the heartstrings and tear ducts with equal vigour and made you cry and curse the blasted tyrants who hung our heroes this music skipped the funeral and went to the wake have a drink and a dance and worry about it tomorrow it was fucking magic.

So this life long love and obsession was born and strengthened with every song I heard and concert I went to. No other band would ever put a spark in me like the Pogues have and how could they ? MacGowan’s imagery and poetry set to the music I grew up hearing and loving was unequalled by anyone else, he remains an unequalled raconteur and all the other pretenders to his crown merely fell by the wayside. So I can answer where I was when I first heard Shane serenade me and who was with me and what happened next and clear as a bell I can remember that day right down to the delicious smell of my breakfast the moment the first chord of ‘Auld Triangle’ rings the air. That’s the first song in the soundtrack to my life but as the years have gone by Shane and the Pogues have added many more and I can only pray there is more to come.

A big BIG thank you for the article to Jim McNally. John has his own blog ‘BrainFarts’ on which you can find pretty much more of the same as this (here) so go and have a look.

‘Film Review: If I Should Fall From Grace With God- The Shane MacGowan Story’  here

5 thoughts on “RED ROSES FOR ME AND ME”