The hardest hitting Irish rock band this side of Dublin city! 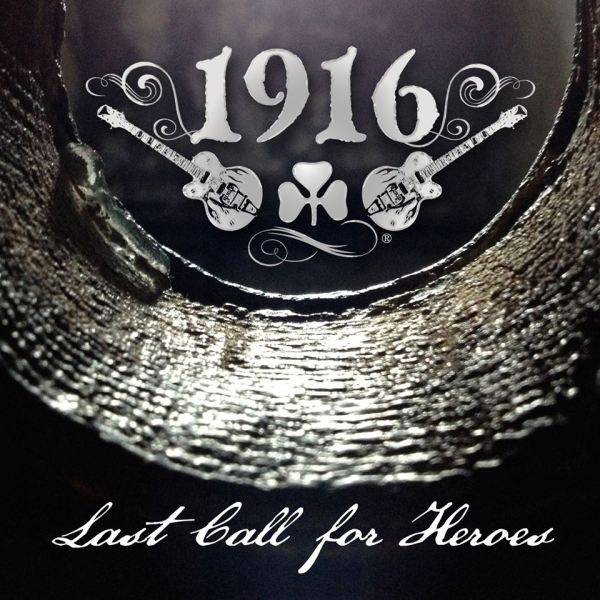 With the sun about to set on 2015 and the end of year ‘Best Of’ polls pretty much settled no-one in the London Celtic Punks camp expected another album worthy of the list to come along. Let alone one to come along that would hit you so instantly in the gut that it would rocket up to be voted the third best Celtic Punk Album Of 2015 (here) by the LCP team. That album was by a band called 1916 from New York and was about to make BIG BIG waves in the celtic-punk scene. The roots of 1916 had been around for a few years now starting off as a duo back in 2006 before deciding to take things to another level with the addition of electric guitars, drums and traditional folk instruments. Soon they had become a staple of the celtic-punk/ Irish rock scene in New York and it wasn’t long before they released their debut album A Drop Of The Pure in 2012 and the follow up, Stand Up And Fight, released the following year. These were both great albums but, and I’m sure the Bhoys won’t mind me saying, it was all solid but still pretty standard celtic-punk rock fare. That debut album was full of the passion and wild fire of a bunch of young Irish-Americans while the follow up shared much the same path but was a much more polished version. Their new album Last Call For Heroes hit the streets in the USA at the beginning of December just gone but took a couple of weeks to reach us here across the broad Atlantic and it is fair to say that it blew everybody’s bloody brains out over here at London Celtic Punks and has since been causing quite a scene across the worldwide celtic-punk community!

Over the years their have been several celtic punk bands who have included a double bass and combined Irish folk, punk rock and rock’n’roll/rockabilly to create something pretty amazing. Craic Haus are without doubt the kings of, what they term themselves, ‘shamrockabilly’ but other notable bands like Black Irish Texas, Black Water County and Kevin Flynn And The Avondale Ramblers also have a double bass player rather than a electric bass guitar to create that rocking sound you just don’t get from a normal bass guitar. The sound that Chris Van Cleve brings to 1916 is quite simply amazing and will leave you gobsmacked. If you thought that pretty much all celtic-punk bands sound alike then get your lug holes around this album and prepare to eat some humble pie as this band will blow any perceptions you may have of celtic-punk music out of the water. 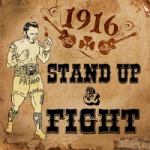 Coming out of the once solidly Irish area of Rochester in New York, 1916 may have seen the Irish population of their home town shrink somewhat but it has only hardened their determination to both sing loud and sing proud about the NY Irish community and their noble history! The Irish are still here and they are still fighting!!

The album starts with an absolute cracker of a song with ‘Tear The Pub Down’. Thrashy guitars and singer Bill dives straight into in a song that deserves to be played while the Ireland team (only one team in Ireland!) walk out on the pitch at the European Championships in the summer. If this song wouldn’t swell their hearts and heads we’ve no chance. Next up is ‘For Whiskey’ which was the first release from the album and is clearly the band’s favourite track. Certainly it shows the band at their most rocking and if there’s one song on this album that could be the 1916 signature tune then this is the one.

Smuggling whiskey into America during prohibition made many a Irishman plenty of money and even better for the Irish community at large it gave the Irish a taste of power that they learnt to hang onto.

“It’s row, ye bastards row
We can see the beach and the pickup harbor
It’s go ye bastards go
To the speakeasies with your whiskey cargo
And now we’re headed back
For the smuggling life we’re living now
It’s whiskey we’re on our way”

This is followed by ‘Long Street Bop’ and is more than a passing nod towards Shane MacGowan’s first band The Nipple Erectors (later The Nips) with a short but sweet blast of rockabilly. 1916 are certainly no covers band belting out Danny Boy and their wonderful choice of covers proves they have both a great taste in music and a good knowledge of their Irish roots. ‘Hot Asphalt’ is up next and is as good a version as I have heard in my entire life. 1916 bounce along with a tonne of energy and turn this well known song into their very own.

“You may talk about yer sailor lads, ballad singers and the rest
Your shoemakers and your tailors but we please the ladies best
The only ones who know the way their flinty hearts to melt
Are the lads around the boiler making hot asphalt

With rubbing and with scrubbing, sure I caught me death of cold
For scientific purposes, me body it was sold
In the Kelvin grove museum, me boys, I’m hangin’ in me pelt
As a monument to the Irish, making hot asphalt”

Made famous by The Dubliners and for once we have a classic traditional folk song not written by Ewan MacColl… I jest of course as yet again its another in Ewan’s armoury of amazing songs that celebrate working class life. This time about Irishmen digging the roads in England. One of those men was my Grandad incidentally. Ewan was a genius pure and simple (check back in a few days time for a review of the recently released Ewan MacColl tribute double album ‘The Joy Of Living’). It’s quite hard to describe how 1916 breath new life into this classic song but by God they do so. I love this version and hats off for achieving something more than just a simple cover version. ‘Nothing Left To Lose’ is one of the albums slower tracks but still kicks it up with the chorus while ‘The Traveller’ has a country/rockabilly feel while still rooted firmly in Ireland. ‘Ordinary Man’ is not the famed Christy Moore song but does travel much the same road lyrically and is dedicated to all those

“worker bees who are buzzing around with you and me”

‘Tomorrow’ is classic celtic-punk territory. Guitar and banjo clash producing yet another fantastic song but with front man Bill and his sometimes gravelly and sometimes almost crooning vocals 1916 prove they can rattle out top class song after top class song. Another great cover that the band properly claim is ‘Mursheen Durkin’. It tells the story of an Irish emigrant who goes to mine for gold during the Californian gold rush during the 1840’s and unusually in tales of Irish emigration for once it’s an upbeat song where yer man revels in leaving.

“Goodbye to all the boys at home, l’m sailing far across the foam
To try to make me fortune in far America,
For there’s s gold and money plenty for the poor and gentry
And when I come back again I never more will stray”

‘Last Call For The Heroes’ is the last self-penned number and again the boys nail it. A swirling tribute to their Irish ancestors in New York. Again its a superb song and one of many fist/pint in the air moments on this album and sadly we come to an end with the final track, ‘The Parting Glass’. Again a Dubliners favourite and though this is the third song on the album popularised by this great band 1916 do something incredible and breathe new life into each song and make it their own. ‘The Parting Glass’ is sung wherever the Irish are throughout the world. First appearing in the 1770’s it is sung wherever Irish friends gather at the end of the night.

Bill sings with the very barest of accompaniment and comes out with something both beautiful and poignant. I can see this song being played at a good few funerals in the future!!
So here’s a blend of rockabilly with Irish punk rock that will leave you reeling while Bill spits out the songs with a venom that will have you belting your lung’s out while bouncing off the walls. Following 1916 through their three albums its clear to see how this talented bunch have continued to grow and evolve as musicians and artists and you get the feeling that they will only continue to get better and better as well. I can honestly say that their has been no better album in celtic-punk since The Rumjacks debut album kicked our teeth out back in 2010. What we are looking at here is the early days of a band that is destined for the top table of celtic-punk and who knows where after that…
Buy The Album
FromTheBand  Amazon  iTunes
Contact The Band
WebSite  Facebook  YouTube  Google+