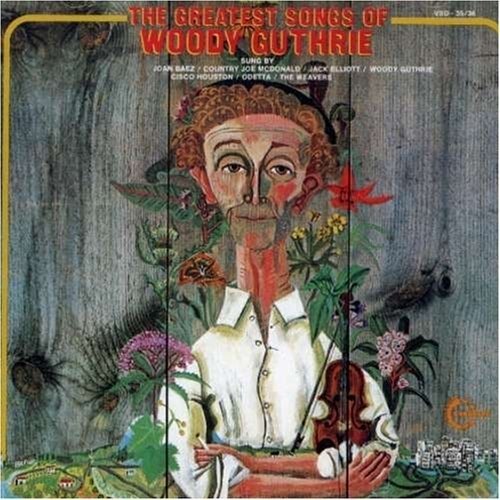 Woody Guthrie was the single most important American folk music artist of the 20th century, in part because he turned out to be such a major influence on the popular music of the second half of the 20th century, a period when he himself was largely inactive. He performed continually throughout his life with his guitar frequently displaying the slogan ‘This Machine Kills Fascists’. His greatest significance lies in his songwriting. Songs like the standard ‘This Land Is Your Land’ and much-covered works as ‘Deportee’, ‘Do Re Mi’, ‘Hard, Ain’t It Hard’, ‘Hard Travelin’, ‘1913 Massacre’, ‘Pretty Boy Floyd’ are all featured on ‘The Greatest Songs Of Woody Guthrie’ in one way or another.

Woodrow Wilson Guthrie was born in the oil boom town of Okemah, Oklahoma in 1912. He went on the road when only 13 years old after his mother was debilitated by Huntington´s Chorea, a incurable nerve disease which would eventually kill Woody himself in 1967. During the years leading up to the Second World War he was with the refugees of the Dust Bowl on their trail westward, with the migrant workers in the California orchards, in the factories and mines where workers struggled for union recognition to gain better pay and conditions, with the black Americans against the prejudice facing them and during the war he was in the navy. Throughout all these experiences and a life full of tragedy his faith in people and his belief that the ordinary person would win in the end never faltered.

Most of those performances and recordings came after Guthrie’s enforced retirement due to illness in the early ’50s. During his heyday, in the 1940s, he was a major-label recording artist, a published author, and a nationally broadcast radio personality. But the impression this creates, that he was a multi-media star, is belied by his personality and his politics. Restlessly creative and prolific, he wrote, drew, sang, and played constantly, but his restlessness also expressed itself in a disinclination to stick consistently to any one endeavour, particularly if it involved a conventional, cooperative approach. Nor did he care to stay in any one place for long. This individualism was complemented by his left-wing political views. During his lifetime, much attention was given in the U.S. to whether left-wingers or even liberals were or had ever been members of the Communist party. No reliable evidence emerged that Guthrie was, but there can be little doubt where his sympathies lay!
Sadly it was as Woody’s health declined to the point of permanent hospitalization in the 1950’s that his career took off. His songs and his example served as inspiration for the folk revival in general and, in the early 1960’s, Bob Dylan in particular. By the mid-’60s, his songs were appearing on dozens of records, his own recordings were being reissued and, in some cases, released for the first time, and his writings were being edited into books. This resurgence was in no way slowed by his death in 1967; on the contrary, it has continued for decades afterwards. New books are published and the Guthrie estate has invited such artists as Billy Bragg and Wilco in to write music for Guthrie’s large collection of unpublished lyrics, creating new songs to record.

So now you know a little bit more about the man in question what’s the story with the album?

There are two reasons why calling this album ‘The Greatest Songs of Woody Guthrie’ rather than some variation on the greatest hits idea makes sense. First, Guthrie was out singing these songs before there ever were any Billboard charts to help defiine exactly what constituted a hit. Second, although this album starts with Guthrie himself singing ‘This Land Is Your Land’ clearly his most famous and most popular song, the track shifts to the song being sung by the Weavers. Guthrie sings a few songs and a few duets, but mostly his songs are sung by other artists. So what we have here is a tribute album, originally a double-album now on a single CD, that represents some of the best first and second generation folk singers who followed in the path blazed by America’s troubadour. The first generation would be those artists that actually got to play with Guthrie, which would be not only the Weavers with Pete Seeger (the artist who most closely followed in Guthrie’s footsteps), but also Cisco Houston, Sonny Terry and Ramblin’ Jack Elliott. The next generation is represented on the album by Odetta, Joan Baez, and Country Joe McDonald. Yes, there is an authenticity to hearing Guthrie sing his songs that nobody else can touch, but there is also something to be said for other artists replacing his rawness with more of the inherent beauty of his songs. Whichever you prefer there is a wealth of Woody material out there for you. Happy hunting!

For More Information On Woody Guthrie:

Part of the ‘Stepping Stones- Classic Album Reviews’ series (click here for the series) where we bring you something a little bit different to what you’re maybe use to. Lost gems from the legends that have inspired and provoked folk music and musicians right up to modern celtic-punk music. Out of print so we can provide a free download link for you.