SHIPPING UP TO LONDON! MICKEY RICKSHAW ON TOUR. 7th-9th JANUARY IN LONDON

Heading to these shores for the first time ever in January 2017. Ten days and counting! These awesome Boston celtic-punkers are coming to London, Kingston and Woking as part of their European tour.

We need your help in spreading the news of these gigs to anyone you know. Join the Events on Facebook and share and invite your mates. We know it’s hard trying to get people to watch relatively unknown bands but with your help lets make this tour a success for the Boston Bhoys! 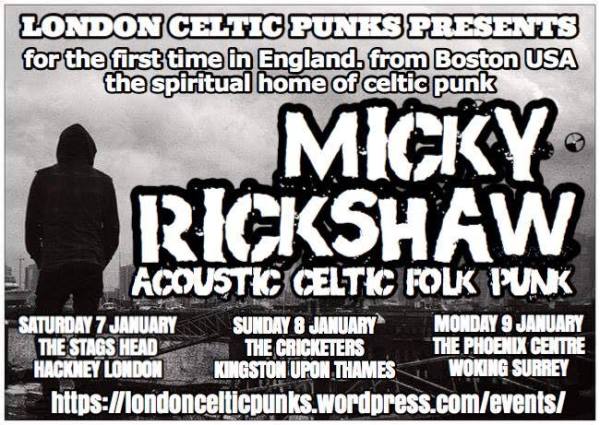 Well well well we all know that The Dropkick Murphys can’t go on for ever and with Boston’s place secured in celtic-punk folklore then who then will take on their mantle when they have retired to the great celtic-punk in the sky? Well I know a band that is more than capable and are ready and waiting in the wings to take over. That band are fellow Bostonians Mickey Rickshaw. A team of young fired up, blue collar, Irish Americans in touch with both their working class American lives and their roots back in the auld country. With Boston’s revered place in the history of punk, especially of the hardcore variety, and its massive, and vocal, Irish population its only natural that celtic-punk should have caught on so well among the Boston Irish community like nowhere else. Traditional celtic folk and punk rock aggression equals the 100% perfect sound for the Boston Irish and if the Murphys invented celtic-punk post Pogues then they have done their job well to hand the baton on to bands like Mickey Rickshaw that will take the sound on for the next generation.

With an Demo EP behind them from 2013, 16 Down and Back Again, it was their critically successful album, No Heaven For Heroes, from last year that saw Mickey Rickshaw’s name explode onto the celtic-punk scene with universal great reviews and plaudits heaped upon them from all corners of the globe. Reaching the top echelons of all the major celtic-punk Best Of lists, including #9 in the London Celtic Punks Top Twenty Of 2015 here.

So this brings onto that new album,  Behind The Eight Ball, again Mickey Rickshaw have hit the jackpot. Eleven tracks of blistering celtic-punk rock that I can’t honestly imagine anyone from yer finger in the ear folkie to yer crustie auld punk not loving the hell out of it. Whizzing past at you at just under half an hour it’s a frenetic sprint to the finish and bar a couple of moments is fast as hell celtic punk rock to be mentioned in the same breath as the Dropkick Murphys so good is this album. Celtic Folk Punk And More web site seem to have already crowned it album of the year here!

And so it is that Wild Atlantic lands across our desk. Indeed the Bhoys from Mickey Rickshaw will be crossing the said ‘wild’Atlantic’ very shortly and bringing their original and brand of celtic-punk to several cities across Europe during January 2016. With four songs, two taken from No Heaven for Heroes, one from Behind The Eight Ball and a new track all done in the stripped down acoustic style they shall be touring with it certainly loses none of its power by being acoustic and if anything proves the old adage right about you know a band is loud when they out punk an electric band with a banjo and a accordion! It’s available for free download at the link below but be warned. Once listened to you will not want to miss their gig/s I can guarantee it!!

Sunday 8th January 2017 at The Cricketers, 20 Fairfield South, Kingston upon Thames KT1 2UL. An absolutely fantastic venue that is only ten minutes walk from the rail station and the music venue is upstairs. Support comes from MATILDA’S SCOUNDRELS, post-punk band with a Celtic twist PHOENIX CHROI, a solo set from BRENDAN O’PREY from local celtic-punk legends The Lagan and GREENFORD BHOY- DJ. It’s a 7-30pm start and admission is just a paltry fiver. Venue here Facebook event here

Monday 9th January 2016 at The Phoenix Cultural Centre, 27 Goldsworth Road, Woking, Surrey, GU21 6JT. Just a very short walk from Woking bus and rail stations. Come and say goodbye to the Bhoys and send them on their way to Europe with a smile in their hearts and with raging hangover’s! No bar in the centre only tea and coffee. Only joking it’s BYOB. Yes that’s right it’s BRING YOUR OWN BOOZE… and on a school night too! Support from COMRADE X and one more to be confirmed as well as GREENFORD BHOY- DJ. Live music from 7-30 until 10-30pm and admission is £4. Venue here Facebook Event here

One thought on “SHIPPING UP TO LONDON! MICKEY RICKSHAW ON TOUR. 7th-9th JANUARY IN LONDON”