The Dead Maggies are a folkpunk band from Tasmania.

Hear tragic tales set to a lively toe-tapping hoedown of music that will make you dance, yell and folk till you punk.

Now here’s another chance for me to wax lyrical about the quality of of music coming down to us from the heights of the Australian celtic/folk-punk scene. Regular readers know my views but it doesn’t hurt to reiterate them again every now and then so here we go. The best music in the world comes from the Australian celtic-punk scene of that there is no doubt. We have been fortunate enough in London to have hosted The Dead Maggies before and fellow Aussies The Rumjacks and The Go-Set have blazed their paths through London several times each leaving behind a ever growing army of fans each time they play. 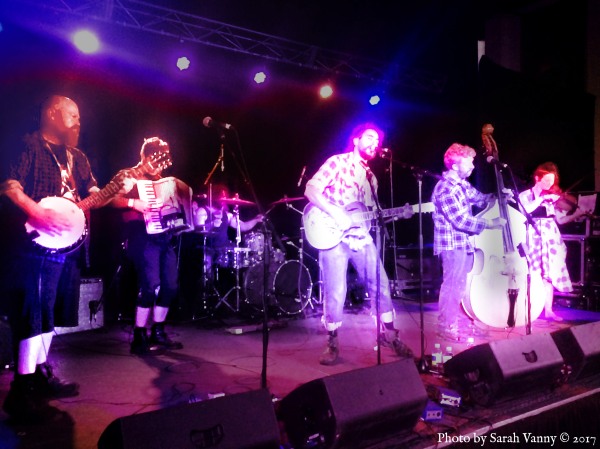 They formed in Hobart on the day of Margaret Thatcher’s death when a bunch of punk and folk musicians were celebrating and started jamming songs accompanied by plenty of home brew. It wasn’t long after that they were up on stage playing with some of the biggest names in Australian celtic-punk. This EP is the third release from The Maggies and follows in the footsteps of their amazing debut mini-album The Dead Maggies Sing About Dead People.

Released in April, 2014 it’s a fantastic way to begin with seven original songs/stories that tell the tale of Tasmania in a way that not many bands could do. Tragic tales set to a toe-tapping lively folk punk hoedown. The above is a link to the re-issue that is the same except with added fiddle. After this release they toured Europe including a week long tour here that took them as far north as Scotland and as south as London where they fair set the TChances stage alight with a set that had the sweat dripping off the walls! They followed this up with their debut full  length album Well Hanged in November, 2015. We ranted and raved about this LP and it even mad #7 in the 2015 London Celtic Punks Album Of The Year (here). We ended that review with these words that are worth repeating

“Twelve tracks that explore the lives, battles, deaths and loves of ordinary people. The people whose history is being written out of the books. The history children don’t learn at school. History that is an embarrassment to the people who rule us and who are scared stiff of the inspiration it could once again provide to the ancestors of the original folk these stories are written about. Music to dance to, love to, cry to and rejoice. The Dead Maggies provide all this in spades and by telling of the dark and oppressive past of Tasmania that history will never leave us. Bands like this should be an inspiration to us all in the celtic-punk scene. Story telling is at the very core of our music. We have a glorious past and if indeed our music has any connection to the past we are forced to retell it in song. Thanks to The Dead Maggies for doing that and doing it so well”

So then what they got to offer in 2017? Well the year started with discussions about a Dead Maggies follow up tour of England which is now definitely happening people (but more on that later!). So with the band busier than ever and looking forward to the rain they released Wild Dogs And Flannies last week on Tassie record label Folk ‘Til Ya Punk Records.

It would seem on Wild Dogs And Flannies they have taken a break from tales of convicts and bushrangers and given us five tracks that deal in the here and now. The EP begins with ‘When I Die’ and its heavy stuff but put to a great ‘cow-punk’ back beat. Starting off slowly before the band kick in and give it us in spades. The subject of assisted suicide is not yer typical celtic-punk fare but that’s exactly why the Aussie scene is so well loved by us all. Never afraid to take on serious subjects or open their hearts. They follow this up with another serious subject dealing with domestic violence on ‘She’. Released last November with all proceeds from the song going to Tassie group SHE (Support, Help, Empowerment).

“One day will come liberty
But for my children, I would die to be free”

I love The Dead Maggies for their raucousness and unabashed celebration of dark things and here they show they can still put out a tune that makes you think. Show your support for SHE by downloading this song here for just one Aussie dollar.

They keep up the serious theme of the EP with ‘Goodbye Gondwanaland’ a slow acoustic number telling of the dangers of the coming (or has it already arrived?) environmental disaster. A beautiful song again designed to make you think and given that GTMongrel has one of the most distinctive voices you will hear in any genre its an emotional song given that added depth by his wonderful vocals. Gondwanaland was one of the two ancient super continents from about 200 million years ago. ‘Wild Dogs And Foxes’ is classic Maggies beginning with acoustic guitar and fiddle before the tempo shifts and we are back in  the celtic-hoe down territory that we love. The curtain comes down and they finish with a flourish and a light hearted fast paced track ‘All My Flannies Are Broken’ with the whole band having a go at vocals. A flannie is a Aussie term for them tartan button up long sleeve flannelette shirts. A lovely ditto about getting them ripped in the moshpit. A superb end to proceedings.

So there you have it. Another masterpiece from The Dead Maggies. Five songs that stretch what they do in every direction possible. This is a band that can really make you think and while that is not always what you want (lets face it music is an escape from the trials and tribulations of life) you could always instead switch off your brain and just enjoy the excellent music!

The Dead Maggies deserve to be massive and while they are half way there in Australia you will get a chance to check them out on these shores this summer. The dates of the tour are yet to be finalised but they are booked to play at Outcider festival on Sunday 6th August and Boomtown on Saturday the 12th. The inbetween bits are being sorted now and in there will be dates in London and Kingston (provisional dates are Thursday 10th and Friday 11th) so if you want to be kept up to date check out the London Celtic Punks Facebook page and subscribe to our Events here and we will see you at the bar!

Get Wild Dogs And Flannies

Since we last reviewed The Dead Maggies there has been an explosion in Aussie sites concentrating on Celtic/folk-punk. Well two anyway. So if you absolutely obsessed with the Australian scene like me do yourself a favour and head over there now.

You can find a host of other amazing Australian bands on the ‘Folk ’Til Ya Punk Records’ web site which has some of the best Australian folk punk, folk, punk, folk rock, celtic punk, gypsy and bluegrass artists around on its roster so well worth supporting.