IN FOR A PENNY RELEASE NEW SONG ‘EASTER MOURN’ AND VIDEO

Ireland, Single Review, USA May 5, 2017 Leave a comment
A new song and video from Irish-American celtic-punk band In For A Penny from Tybee Island, Georgia in the southeastern United States. We don’t often feature videos. In fact I can only remember us doing it a handful of times but as soon as I heard ‘Easter Mourn’ I knew it was worthy and on what better day than the Bobby Sands anniversary. It’s a taster from their upcoming album ‘One More Last Hurrah!’ to be released soon.

“Easter mourn in the early light of Spring April 1916
Did a proclamation ring o’er Dublin town
From the GPO came the charge to go
Right proudly flew the flag of war o’er Dublin town
There’ll be no resurrection on this Easter mourn
The poets and the teachers, soldiers and the speaker
Pledged their lives to free her,
Oh Dublin town in the rubble fought the rabble,
Bravely to the battle while the long range guns did pound and rattle,
O’er Dublin town
Locked up by the foreigner in Kilmainham gaol”
Singer/ bouzouki player and songwriter Sean McNally was kind enough to write a few words about the track so without further ado over to him.

“The song was inspired by a story I read about Canon O’Neill who wrote the modern lyrics to Foggy Dew. Came up with my own arrangement for the upcoming release and read about how he wrote it after he attended the first sitting of the new Irish Parliament, known as the Dail. The names of the elected members were called out, but many were absent. Their names were answered by the reply “faoi ghlas ag na Gaill” which means “locked up by the foreigner”. the line just hit me and it call came from there… it’s an homage to Foggy Dew basically” 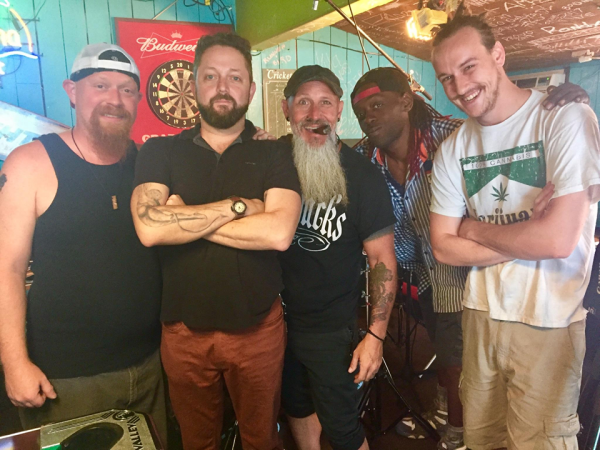 you can support this great band by getting their latest EP ‘Every Day Should Be Saint Paddy’s Day’ for only $5 from here on CD or here on download. Read our review here.

Bobby Sands died in prison following a 66 day hunger strike on this day back in 1981. Bobby Sands would be the first of ten men to die in an effort to gain political status in a very public battle with British Prime Minister Margaret Thatcher. 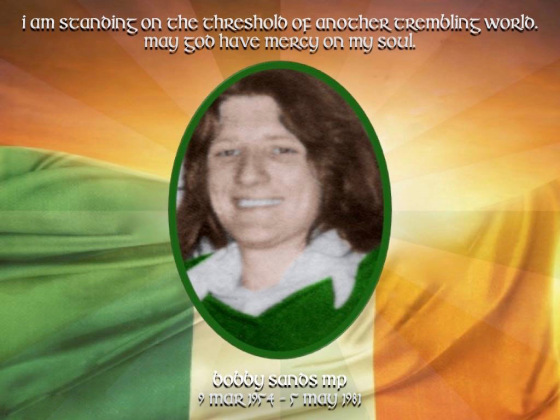 Born in 1954, Bobby Sands grew up in Belfast under the cloud of nationalist and loyalist divisions. He joined the Republican Movement when he was 18 and was soon arrested and imprisoned for possessing a firearm. A second arrest in 1976 led to a 14-year-sentence. In prison, Sands embarked on a 66 day hunger strike that led to his death. During the strike he was elected a Member of Parliament.

A hero among Irish nationalists, Robert Gerard ‘Bobby’ Sands was born in Belfast, 9 March 1954. Bobby was the oldest of four children born to John and Rosaleen Sands, and the couple’s first son. At an early age, Sands’s life was affected by the sharp divisions that shaped Northern Ireland. At the age of 10, he was forced to move with his family out of their neighborhood due to repeated intimidation by loyalists.

“I was only a working-class boy from a Nationalist ghetto, but it is repression that creates the revolutionary spirit of freedom.”

Loyalist intimidation proved to be a theme in Sands’s life. At the age of 18, he was forced out of his job as an apprentice car builder by a group of British supporters. Not long after, he and his family had to move again. Thatcher’s view of the prisoners and the IRA was that they were murderous thugs. Nationalist Ireland’s view the complete opposite.

The IRA played a very astute international campaign during the hunger strikes gaining widespread support and attention for their cause. The deaths of Sands and his colleagues boosted IRA recruitment. The support for the strike was evidenced by Sands winning the vacant House of Commons seat for MP for Fermanagh and South Tyrone in a by-election necessitated by the death of sitting MP Frank Maguire. In a hugely emotional campaign, Sands defeated Unionist candidate Harry West.

The demands of the prisoners included:

1. The right not to wear a prison uniform;

2. The right not to do prison work;

3. The right of free association with other prisoners, and to organise educational and recreational pursuits;

4. The right to one visit, one letter and one parcel per week;

5. Full restoration of remission lost through the protest.

Britain never formally acceded to the strikers’ demands but three days after the hunger strikes finally came to an end on 3 October, Ulster Secretary James Prior announced a number of concessions including the right to wear civilian clothes and the restoration of partial remission for those who obeyed prison rules for three months.

Tagged: In For A Penny