Another top quality Indonesian celtic-punk band belt it out of the ball park with their new EP! Black Rawk Dog continue the Indonesia love in… 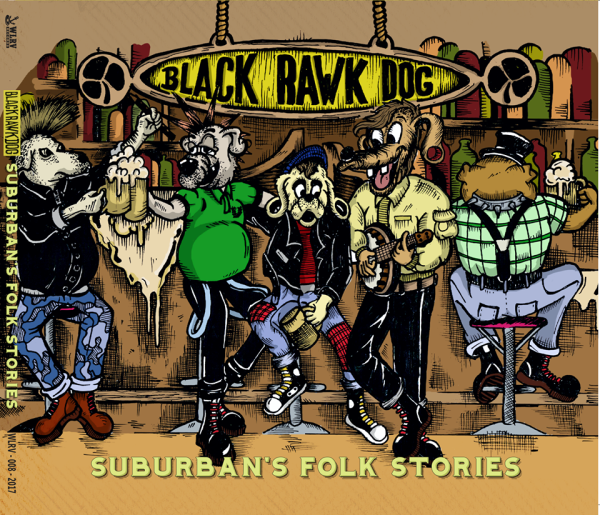 Just a couple of days ago we reviewed a great EP from an Indonesian celtic-punk band (here) and low and behold just like buses up rolls another one five minutes behind! As with Rain In Summer we first came across Black Rawk Dog on the absolutely superb Indonesian celtic-punk compilation ‘Wind From The Foreign Land’ from 2014. Fourteen tracks from fourteen different celtic-punk bands from across Indonesia and from right across the whole celtic-punk spectrum from folky traditional folk to celtic-Oi! and hardcore it’s all there and is definitely one of the best album’s I have ever heard. We described Black Rawk Dog then as

and on the basis of Surburban’s Folk Stories I can see no reason to change that!

The Black Rawk Dog story begins at the end of 2010 when a group of Sidoarjo friends become interested in and decide to take up an unlikely form of music for youths in their country. It takes a while to get going and in November, 2011 they begin their journey playing with another of Indonesia’s celtic-punk greats Skarockoi! They began to invite some of the other great bands from around the country to play in Sidoarjo and soon enough they were being invited to play around the country as well leading to their performance at the Jogja Celtic Punk Night. BY now the band had set out to find more about traditional Irish music and the wider celtic music scene in Indonesia and Black Rawk Dog were now firmly on their way to transform from a punk band with folk instruments to a fully fledged celtic-punk band. A skinhead mate suggested ‘Black Dog Conspiracy’ as a band name and somewhere along discussions they ended up as Black Rawk Dog and set out to take Indonesian celtic-punk to the masses! 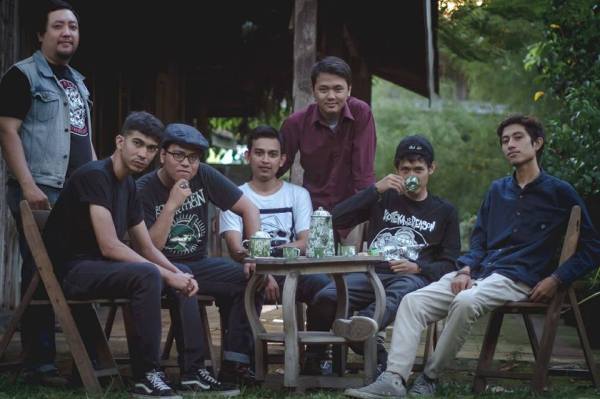 Surburban’s Folk Stories was sent to me by an old mate on Facebook Jr Miko from the record label that released this and pretty much everything Indonesian celtic-punk related. The first thing that strikes you on listening to this EP is how much energy the band has. If it’s possible to tell how much fun a band has through listening to them on record then here is the best example I have heard it quite a while. They roll out all the celtic instruments to kick start ‘Brand New Day’ the opening track. 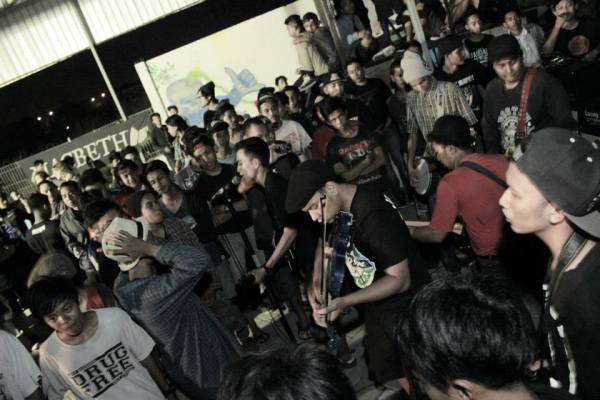 Tin whistle, bango, fiddle all leading the song with vocals shared among the band and a real Dropkick Murphys singalong going on. Now the band sound more like Flogging Molly than the Murphys but the songs do remind me of them more somehow. A fantastic start to the EP and the sound of quality Irish folk music fills the air on the second track too. ‘Work Proud’ is again sung in English and is nice and clear and just on the right side of punky gruffness. Again its fast but without losing the folky sound and the ‘Woah Woah’ gang chorus is great. The celtic instruments are out in force again but the whole band is on top form here with nice drumming and guitar. Now regular readers will know how i wax lyrical about the most under-rated instrument in celtic-punk, the harmonica. My uncle Pat bought me a mouth organ when I was a kid and though I never did quite master it I still love the sound. ‘Still One’ slows it all down a little and the harmonica kicks it off until more gang ‘Woah Woah’s come in and beautiful guest female vocals take the song slowly up in tempo into a fast and frantic hardcore celtic folk punk number. The song ends with a high kicking blast that comes with a tinge of country included. More than half way through the EP and I am absolutely loving it. Play this in a bar in Dublin, London or NYC and tell the regulars these are a local band and you’ll get no argument I am sure. In fact the way that Black Rawk Dog have taken to Irish music would put most Irish bands on the island of Ireland to shame. Indonesia is a 80% majority Muslim country so great to hear ‘Rumble In The Bar’. Celtic-punk as our header states is music of rebellion and resistance and great to hear Indonesian’s playing it as well as anyone else, and sometimes better. Starting off with banjo it all turns into a massive ceilidh and like some sort of Irish-punk-celtic-hoedown with more gang vocal chorus and fiddle to die for. Super production here on all the songs and the music is flowing as the beer is flowing out and sadly the EP comes to an end with ‘The Old Man Stands Alone’. Expecting a slow maudlin ballad Black Rawk Dog kick out the best song on the record that takes me right back to to the days of The Pogues. Whoever is sharing their record collection with these guys is doing a fantastic job and I’m left wanting to hear more from this great band.

All the songs here are penned by the band themselves and if I had any criticism it would be that it’s only twenty minutes as I am now desperately wanting to hear more from them. This EP is a perfect example of what can be done with a bunch of extremely talented musicians and a wish to move beyond playing bog standard punk music. This is easily as good as anything I have heard this year and I only wish that bands like Flogging Molly or The Murphys would put their hands in their pockets and get some of the bands from Indonesia over to the States for some exposure. How about getting them on the next Salty Dog cruise Flogging Molly?