“It’s an album we feel is about the times we live in right now and about the opportunity to change the direction that all this crazy stuff is going into a positive future which is what inspired the album name which itself we felt was the feel of the album from the songs we have written for it over the last 2 years. We hope you all enjoy it as much as we did writing it all and we can’t wait for you all to hear it!”

Not long after this web-zine was started we came across a fantastic new band from the south of England who were literally just starting out as well. I can’t now remember what it was that brought Matilda’s Scoundrels to our attention but I’ll be eternally grateful that something did. Since then they have featured often on these pages due to their more than regular gigs and releases. With a bunch of EP’s behind them, including a live one and a compilation of their first 2 now out of print EP’s, they have kept our reviewers both busy and happy, with a stream of extremely well received releases. From that very first review we wrote that we were looking forward to the inevitable album release and low and behold that day has arrived and to say we are happy is a massive understatement.

For a band that only formed in 2014 Matilda’s have crammed an awful lot in to a relatively short time. Gigs around Britain have been followed with appearances at many of the best music festivals around as well as a successful European tour earning them a growing legion of fans. They come from the famed old smugglers town of Hastings on the south coast of England and this connection can be felt in their music.

“No business carried on in Hastings was more popular and extensive as that of smuggling. Defrauding the revenue, so far from being considered a crime, was looked upon as a laudable pursuit, and the most successful ‘runners’ were heroes. Nearly the whole of the inhabitants, old and young and of every station in life, were, to some extent, engaged in it”

Though they are not strictly speaking really a celtic-punk band they have embraced the scene and are big fans of the bands within it, supporting many of the best groups that pass through England or London. Their sound has embraced elements of celtic-punk and this was certainly not harmed when Jason learnt to play the banjo! One of the things about Matilda’s Scoundrels is that within a few seconds of each song you will recognise who it is. It is quite the achievement to have so distinctive a sound and to be quite so unlike anyone else. You need good songs though and despite their regular recording they have managed to produce ten songs specifically for As The Tide Turns and each one would stand alone as a Matilda’s classic.

So enough about then what about today’s release. Well for a start you get ten self penned tracks that clock in at a pretty decent forty-six minutes which is plenty of value for any fellow Yorkshiremen out there! The album begins softly with ‘Burn It Down’ and Quinn’s mandolin before the music takes an upturn with Dan’s thrashy guitar and Jens accordion. Quinn shares vocals with Jason throughout the album and they accompany each other perfectly well. Quinns ‘raspyness’ and Jason’s loud shouty vox fit their sound and the music is in turns both folky and punky with moments of absolute calm as well as absolute uproar!! ‘Take It To The Streets’ begins with accordion and Jason takes the lead on vocals and the album is really flowing now. Catchy is oft used, especially by me, in the celtic-punk world and there is no better word but by Christ they have nailed it here.This is music to nod your head frantically to, to tap your leg to and at the same time, if you are young enough, stage-dive!

Quinn takes over for ‘Shackles & Bones’ and its accordion here that stands out. Sometimes live the accordion is not always ‘loud and proud’ but the production here is spot-on and so the folky instruments are all clear as anything. ‘Bow To The Powers’ seems to have been in their set for ages but this is their first proper recording of it and once again its fast and catchy and infectious. All the songs on As The Tide Turns would be ‘ear-worm’ material but ‘Mr.Martyn’ was a real pleasant surprise for me. The most celtic-punk song of the album so far it lasts well over five minutes and the real trad folk beginning fades into some trademark Dan Flanagan thrashy guitar before the song leads into some amazing folky punk with Quinn’s voice shining through. As usual the lyrics are well thought out and positive in a way that not too many bands are. This is kind of a serious album though and that is the only thing missing so far. Matilda’s have a great sense of humour and they are not adverse to singing a song about getting pissed so ‘Bottle Of Rum’ comes along at just about the right time.

One of the albums best tracks is up next and on ‘Friends Of Mine’ they knock out a song that is destined to be stuck in your head for the few days. Jason’s tin-whistle giving it that certain Irish/Celtic feel while they put the punk to one side and concentrate on producing a classic modern day sea-shanty. We are nearing the end and on this record they have been given a great chance to write songs they want to. This album shows they don’t have to cram too much in and with the longer running time and a average length of (gulp!) four minutes they can elaborate on their songs and they manage it without them feeling too long or too fancy. ‘War On Drugs’ is the album’s punk song but even then it still has a certain folkiness stamped all over it by a Doc Martin boot. We are back on the ocean again next with the penultimate song ‘Godforsaken Sea’ before finally the album’s closing track and also it’s best one. Lasting over six minutes ‘Into The Fire’ really, really shows the Scoundrels at their best. Tin-whistle and mandolin leads us into a proper Scoundrels epic. Mostly played at breakneck speed and with a catchiness that even outdoes the previous nine songs. The foot is tapping and the head is nodding and if I had a pint in my hand it would be raised above my head to the heavens. A great gang chorus and a tune to die for it’s as good a song as they have ever put to Bandcamp. One of the most noticeable things on As The Tide Turns is that while most celtic-punk bands find it easy to stick to making folk songs or punk songs Matilda’s Scoundrels play songs I would best describe as the embodiment of folk-punk. Each song is so much more than just that though with self-penned folk and celtic tunes wrapped round everything and never once sounding forced or out of place. 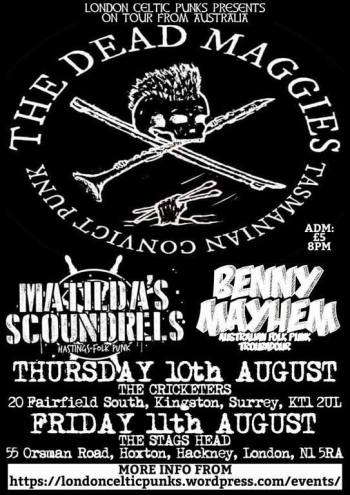 This fantastic album shows that Matilda’s Scoundrels are destined for great things, that much is beyond dispute, and its their ability of making everything they do totally recognisable yet without sounding repetitive that has helped them enormously. Their songs contain it all. Enough folk for the folkies and enough punk for the punkers and they’ve got this far on their own bat as well and now with the backing of the awesome DIY independent record label TNS things are only going to get better for these Hastings Bhoys.

Order As The Tide Turns

A not-for-profit DIY punk and ska label based in Manchester. We also put on gig, release a fanzine, have a distro and put out a podcast.