You can hear drunks in the streets singing Irish folk songs? The peaty scent of whiskey is crawling up your nose? The maidens wear their best clothes? Be sure, the County Whiskey Folk Punk Crew is near. 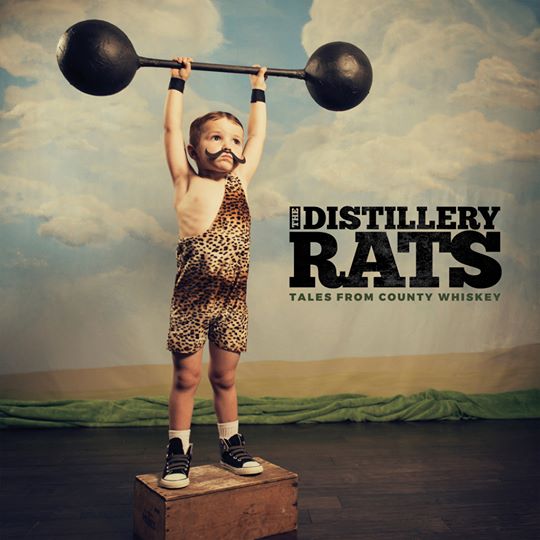 Formed in the German wine making area of Heilbronn the Distillery Rats have been celebrating their own successful brand of Irish folk punk since 2005. We have mentioned before our theories of why in Germany celtic-punk and Irish music are so widely celebrated but they love all things Irish over there and the Rats are another in a long line of bands who have managed to take punk rock and Irish folk and unify them together into what we all know to be the ultimate good time music.

(compilation of snippets from each song on the album)

Since forming as 4-piece originally called Commerzpank in  2005, The Distillery Rats have played all over Germany in pubs,clubs and festivals large and small. From that original 4 piece the band has grown to include two vocalists, guitars, drums and bass and the folk side of the band banjos, mandolin, accordion, piano, bouzouki, whistles and uilleann pipes. Before this release their only release has been a now sold out five-track EP Back On The Road in 2010. So a full lengther has been a long time coming and widely anticipated within the scene.

While here in England the celtic part of celtic-punk is often underplayed in countries like Germany and Hungary they completely go for the Irish/Celtic part and here on their debut album The Distillery Rats are no different. This is full on Irish folk played with pace when needed but not afraid to slow it down too either. Fifty minutes, fourteen songs, eleven of which are originals with a range of songs about whiskey, beer, porter and even cider. They also play some drinking songs as well! The whole thing kicks off, appropriately,  with ‘County Whiskey’ and as catchy a tune as you’ll find on here with a more rock’n’roll thing going on led by accordion before the pipes kick in. The first thing you notice here though is the sheer amount of instruments playing. With eight band members and pretty much all of them playing at least two instruments the whole thing is crystal clear and you can hear everything going on, even in the punkier numbers.

As second song ‘Poor Old Paddy O’ kicks in you can’t help but notice that they seem to be inhabiting the middle ground between the DKM’s and Flogging Molly. The accordion lends more to FM but the punky guitar is dead on DKM. A song that bridges the gap between celtic-punk’s two biggest bands. Quite an achievement but can they keep it up? The album’s first traditional cover is a brilliant song in its own right, ‘Johnny Jump Up’. An Irish drinking song written by Tadhg Jordan and first popularized by Jimmy Crowley, before being brought to a wider audience by Christy Moore. Johnny Jump Up was a strong cider, apparently made stronger by being stored in old whiskey barrels brewed in county Cork. The bhoys play it with typical gusto and keep the pace up nicely. A cool mostly acoustic punk number that is still as loud as hell! Country’n’folk combine with Phil’s great and deep vocals for ‘The Angel’s Share’ a lovely dark ballad with just acoustic guitar and faint mandolin in the background that builds up without speeding up. Next is the lead single for the album, ‘Shannon River Lady. They released a class video and the song itself also borrows a little from rock’n’roll, in both sound and for the video, without abandoning The Distillery Rats formula too much.

Follows is another cover and again it’s one that has been regularly done over the years but if that is true then their is always a reason. ‘Come Out Ye Black And Tans’ is one of the best Irish folk songs ever written and ripe for speeding up and playing celtic-punk stylee. Fast and punky but with the guitar giving it a bit of a ska beat at times. An Irish rebel song written by Dominic Behan, brother of famed Irish writer Brendan Behan that will get your Irish blood pumping! The song tells the story of Irish resistance and ties Irish nationalism to the struggles of other peoples against the British Empire across the world. As much as I love this kind of ‘fire in the belly’ rabble rousing I also love the slower stuff, especially when it’s done well and ‘Anchor, Harbour, Home’ hits the spot nicely. Slow and if they were aiming for the classic sea shanty sound then well done to them. Nothing too serious lyric wise on Tales From County Whiskey and I can tell you after watching the news of the last few days then that’s a massive relief. I’m a bit bored of punk bands radical sound bites and have long come to the conclusion we’d be better off singing a song like ‘Singin 1, 2, 3’ then about nuclear war!

Fast and upbeat and more about real life than any punk song I have heard recently.

I wasn’t expecting ‘Chicks For The Rooster’ next and have to say it blew me away. Totally accordion led and could easily pass for a Pogues instrumental or even a Brendan Shine show band tune. A real Irish knees up song and proving, if you needed it, that these bhoys know how to play Irish music… and play it well. When I saw ‘The Foggy Jew’ on the track listing I had a little nod to myself and thought oh no spelling mistake but instead it’s possibly my favourite song here. Slipping into klezmer slightly with great accordion and subdued backing from the rest of the band with a fancy pants brilliant celtic-punk chorus and even time for a banjo led ska/reggae section leading us out. We back in the pub again for ‘Henry Won’t Be Sober’ about going to see The Distillery Rats play and ending up somewhat on the merry side. We’re speeding to the end and ‘How To Spend It’ keeps up both the pace and the humour about a man with the awful problem of having too much money! The addition of uileann pipes here is always a great thing and any band who uses them is always guaranteed a great welcome by the London Celtic Punks. ‘Nothing Else Matters’ reiterates the Distillery Rats philosophy and, increasingly mine too, with talk of all the world’s problems and the only solution!

Tales From County Whiskey comes to an end with one of the most popular (and it has to be said overdone) songs in celtic-punk with ‘Drunken Sailor’. Now if you gonna record this song you need to make it every bit special as while it may be a great song to play live and a real crowd favourite it has been recorded by pretty much everyone and not too many version’s of it stand out. Luckily for this reviewer The Distillery Rats manage it. The longest song on the album they open it as part ballad before punking it up before then drifting into ska and back into celtic-punk again. Again it’s the amount of instruments an that lifts it out of the ordinary and makes it that bit special and with the chugging guitar and clear and crisp it’s a solid end to a grand album.

Sometimes its fast and sometimes its slow, sometimes its sentimental and sometimes its  in-yer-face. The Distillery Rats don’t let the ‘issues’ of the world get in the way of what they do, fantastically well, which is to play a great set of songs that would have even the grumpiest of folk music traditionalists (better known as snobs) on their sandalled feet and bouncing around the dance floor spilling their real ale. As we mentioned before they somehow manage to sound like both Flogging Molly and the Dropkick’s at the same time while never aping either. This is pure unadulterated good time excellently played Irish music with both a nod to the present and a loving referential tip of the hat to to the past.