HOW THE IRISH BECAME THE POGUES

Last March I enjoyed the pleasure (and attendant hangover) of partaking in the annual ritual of alcoholic commerce that is St. Patrick’s Day in Boston.  Although I had grown up in the area, and in a decidedly Irish-American household at that, I had spent the past seven such holidays as a resident of New York City, and while St. Patrick is certainly heartily toasted in New York things haven’t reached the pathological extremes of Boston, where they’ve even gone so far as to cook up a bogus holiday in its honour.  After managing to find a bar which, while crowded, was thankfully free of either a gratuitous cover or any sort of neon leprechauns, my small group of friends and I settled in for an evening of friendly imbibing and spirited conversation, surely two of the more distinguished aspects of the Irish national character.  All night we listened to the Celtic-infused rock ‘n’ roll of the Pogues.  This was not by choice—the bar had no jukebox, merely a bartender’s iPod—yet the selection seemed so obvious that I doubt any objections were raised.  In fact, I doubt many objections were raised in any of the numerous bars throughout the city that most likely played a considerable dose of the Pogues on St. Patrick’s Day, or for that matter in any of the countless establishments around the world who presumably engage their patrons in similar entertainment come March 17.  As the old cliché goes, everyone becomes Irish on St. Patrick’s Day, and a good deal of those busying themselves with “becoming Irish” will find themselves at some point listening to the music of the Pogues.

The issue of how the Irish became the Pogues—or, for that matter, how the Pogues became Irish—is an interesting one that makes their emergence as progenitors of Irish authenticity all the more complex.  Outside of Dublin-born guitarist Phil Chevron, none of the members of the Pogues’ primary line up were Irish by birth: refugees of the dying British punk movement with an affinity for traditional Irish music, singer-songwriter Shane MacGowan¹, tin whistle player Spider Stacy and accordionist James Fearnley formed the Pogues in the early 1980s in North London.  Furthermore, while their music often proudly employs ‘trad’ instrumentation—whistles, pipes, banjo, accordion—the Pogues also prominently feature two crucial pieces you’d be loath to hear while trolling trad sessions in Galway or Cork: namely, an electric bass and drum kit.  Indeed, when one couples their rhythm section—clearly more schooled in American R&B and rockabilly than reels, jigs or hornpipes—with their ragged lead singer, the Pogues have always at their heart been a rock band, closer to the Clash than Turlough O’Carolan.  I bring up these points neither to challenge the Pogues’ claim to Irishness nor slander their authenticity, but rather to point out that the band represents a fascinating example of transnational mobility in which a British band aggressively appropriates Irish musical traditions, imbues them with a punk sensibility then exports the sound around the world, where the result is deemed ‘Irish’. Noel McLaughlin and Martin McLoone have argued that the Pogues’ musical hybridity speaks to diasporic qualities central to Irish cultural identity, noting that

While surely compelling, such an assessment fails to address the Pogues’ massive popularity in Ireland itself, where the band’s frequent touring and Republican political leanings have elevated MacGowan and company to folk-hero status.  It would seem that the Pogues’ greatest musical legacy lies not in their commitment to Celtic musical traditions but rather the affectionate and wilful dragging of these traditions into the foreboding present, and it is through this gesture that the Pogues most effectively lay their claim to a far more meaningful Irish tradition than the sort celebrated with green beer and shamrock tattoos.

Nowhere is this impulse so thoroughly manifested as in the complicated talents of Shane MacGowan.  A gifted melodist and the sort of writer that inspires websites devoted to interpretations of his lyrics, MacGowan holds a place among the finest rock songwriters of his generation.  As a singer MacGowan’s voice is tattered yet full of conviction, reminiscent of Seamus Heaney’s memorable writing that ‘the voice of sanity is growing hoarse’. Of course, it is also with MacGowan that the Pogues’ more problematic notions of Irishness are cultivated.  MacGowan’s infamous alcoholic tirades, run-ins with the law and glorification of the Irish Republican Army have surely re-inforced as many negative Irish stereotypes as his prodigious musical output and knack for verse have brought out positive ones.  While MacGowan has frequently drawn comparisons to the late Irish poet Brendan Behan (a comparison MacGowan himself invokes in the sublime ‘Streams of Whiskey’), there is another, albeit fictional, figure from Irish literature with whom MacGowan shares a resemblance: James Joyce’s Stephen Dedalus, the irascible protagonist of ‘Portrait of the Artist’ who must turn his back on Ireland in order escape the spiral of his homeland’s tormented past.  Whereas Stephen ultimately flees Ireland for Paris, MacGowan and the Pogues sought to flee London to a particular Ireland of their own imagining.  It is this Ireland, one that exists via North London and rock ‘n’ roll, that so many of us visit every St. Patrick’s Day, when the Pogues songs flow from jukeboxes like so many streams of whiskey and we all try a little too hard to become a little more Irish than we probably should. 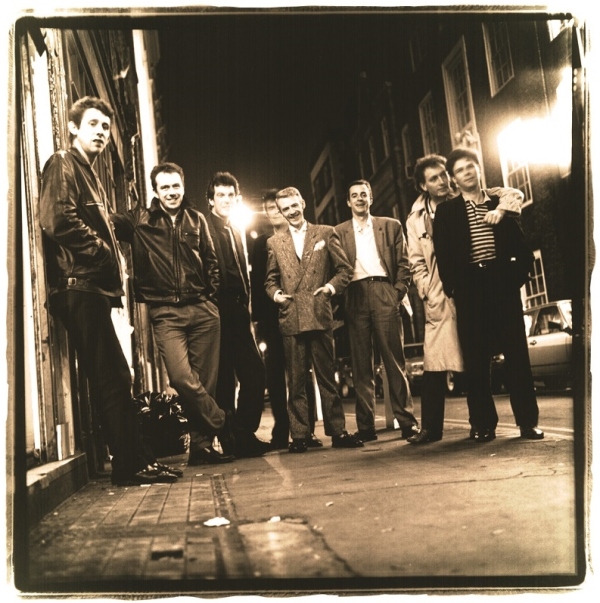 ¹ A common misconception is that Shane was born here but he was in fact born in the Premier County and moved to England as a child.

if you’re interested in The Pogues we have a stack of great articles on them:

‘Film Review: If I Should Fall From Grace With God- The Shane MacGowan Story’  here

‘Red Roses For Me And Me’  here

‘The Pogues On Mastermind- The Questions’  here

12 thoughts on “HOW THE IRISH BECAME THE POGUES”