Founding fathers of Ukraine’s celtic-punk movement and the originators of ‘Stout Rock’. A blend of Irish, Scottish, Breton and Finnish folk with a variety of rock and metal styles.

Born in the Ukrainian capital of Kiev only a few years back in 2009 Ye Olde Chariot is the second release from ShamRocks and combines all the parts that made their first release so enjoyable. We waxed lyrical at how much we loved Captain’s Log. A mutual love of traditional Irish and Scottish music, Finnish polkas, ancient sea shanties and good old fashioned punk rock and metal that has introduced the people of Ukraine to some out of the best modern adaptations of classic folk songs out there. Taking traditional melodies played on the violin, mandolin, flute and accordion and mixing them up with head-banging riffs that are both heavy and danceable at the same time. That debut album was a collection of the best of ShamRocks songs since they were formed from their first demo to their last studio sessions mastered brilliantly to give it that ‘crowded pub’ feel. It was voted into 4th place in our end of year London Celtic Punks Top Ten Folk/Trad releases but could just have easily made the celtic-punk Top Ten as well!

What we had to say then stands the test of time

“There is plenty here to upset the folk purists (or snobs as I prefer to call them) but these people would like to keep the folk music of our people locked up in a box. Put away and kept out of the hands of people who (in their opinion) don’t respect or cherish them as much as they do. Their way is noble yes but is also a surefire way to kill off folk music. They attacked the Dubliners and then The Pogues in their time and now fawn longingly over the bands they once called sacrilegious. ShamRocks have taken a bunch of songs and added so much more to them than by simply folking it along. That they are Ukrainian adds another dimension to them. An absolutely stunning album with the only tiny criticism I may have is that their’s not enough ShamRocks own self-penned songs and to that end they have already began work on a EP that may or may not develop into a LP and I for one can’t wait to hear it!”

Well a full album is still in the works so in the meantime ShamRocks offer up this five track EP for us and again to say it is very good would be a massive understatement. 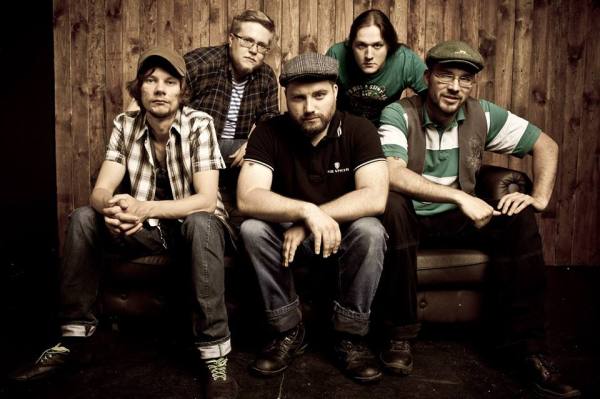 Ye Olde Chariot begins with the sound of an ocean before morphing into, appropriately, an olde sea-shanty, ‘Roll The Old Chariot’. Originated as an African-American spiritual it was used as a ‘stamp-and-go’ or ‘walk away’ meaning the sailors would hold on to the line and walk with it creating a steady pull. The song starts off in an acapella style before the mandolin is introduced and just as you are lulled into the gentleness of the song BANG ShamRocks launch into the celtic-punk version and the cobwebs are well and truly blown away!

Fast and carefree the song still maintains, as is ShamRocks style, very much the original folk song despite some great touches like a ska ‘ish’ beat at the beginning and the trumpet towards the end. Simply breath taking and easily the best version I have ever heard. Can’t tell you much about the next song titled ‘Пияка-Гультяй’ ‘cept it’s in Ukrainian and is fast and has a Eastern European sound. No matter how fast  they play or how much punk or metal they inject into it it’s amazing that so much of the original folk songs survives. We are only three songs in and ‘Der Stern Der Grafschaft Daun’ is yet again a real eye opener and when I say that I’m a little jaded after hearing yet another celtic-punk version of ‘The Girl From The County Down’ I mean it. But this is different and as the band say themselves it’s

Well that was until I heard ShamRocks version. I thought I’d heard it played every which way imaginable but I was wrong! Yeah a metal version but once again never straying too far from that original.

Next up we have a instrumental called ‘Topor Polka’ and it’s extremely well played with great fiddle work and accordion alongside the driving electric guitar, bass and drums. I daresay this is a real fans favourite live and it may steer more towards their own side of the world rather than Celtic but we don’t hold a monopoly on the best music and I love to see bands adding their own influences into the mix. Ye Olde Chariot comes to an end with ‘Kiltartan Cross’ and it’s a beautifully ballad based on the poem ‘An Irish Airman Foresees His Death’ by the famous Irish writer and nationalist W.B.Yeats. The words are worth repeating so here they are.

“I know that I shall meet my fate
Somewhere among the clouds above;
Those that I fight I do not hate,
Those that I guard I do not love;

My country is Kiltartan Cross,
My countrymen Kiltartan’s poor,
No likely end could bring them loss
Or leave them happier than before.

Nor law, nor duty bade me fight,
Nor public men, nor cheering crowds,
A lonely impulse of delight
Drove to this tumult in the clouds;

I balanced all, brought all to mind
The years to come seemed waste of breath,
A waste of breath the years behind
In balance with this life, this death”

Though he may be fighting for Britain the airman’s heart is at home in his Irish village of Kiltartan. Written not long after the end of the First World War where many Irishmen died fighting for the British Empire their lives would have been better served fighting at home. Serge’s vocals are mournful and timeless. They convey the emotion of the words perfectly and the band’s backing is perfection too with the flute taking the lead through most of the song and so the EP ends very much on a high note. 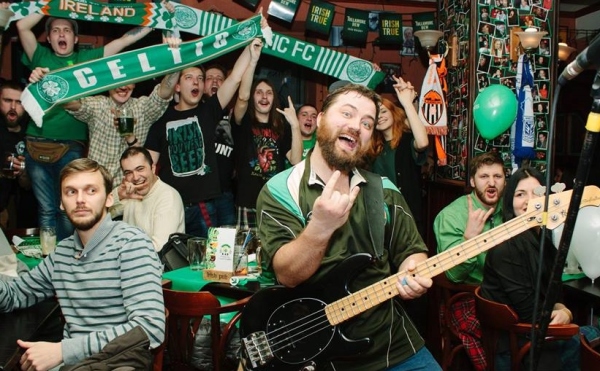 Now there are many bands out there who steer clear of the usual well worn covers and prefer to do some research or delve back into their childhoods for inspiration and we always love that but most of the time these bands hail from within the Irish/Celtic diaspora. The amazing thing about ShamRocks is that they don’t. They don’t and yet the respect and affinity they have for Irish music is clear to anyone. As mentioned no matter how hard they rock out there is still the unmistakable sound of traditional folk music behind them. They have produced here eighteen minutes of exactly what I think of when I think of celtic-punk. Modern music but with both feet firmly planted in the past and there are many many modern Irish bands who could do well to learn from ShamRocks example.

(have a free listen to Ye Olde Chariot on the Bandcamp player below before you purchase. It’s only $3 which is super good value believe me!)