Irish folk punk band from Sweden bringing chaos and mischief to the world!

Black Anemone hail from very close to the river Lagan… no not that one but the one just by Jönköping in southern Sweden! Now the Swede’s have quite the liking for celtic-punk music and Sweden has supplied the scene with some fantastic bands like Sir Reg and Finnegan’s Hell for just two and one of the latest are this bunch of young, edgy, sharply dressed folk-punk folk with their excellent brand of straight up, in your face singalong mixture of Irish folk and rock’n’roll and punk attitude. 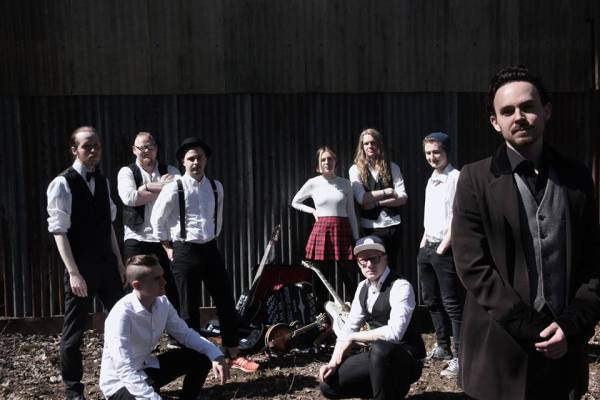 Black Anemone formed in 2010 when front man Mattias fell in love at school with old time Irish music and after recruiting his longtime friend Andy on guitar they began to lay the foundations for the band. As Mattias says

”I wanted to mix the sound traditional folk music, mostly Irish trad and fusion it with rock and punk. Having strong roots in the rock and punk genre”

Within a few months and with the addition of several more school friends Black Anemone was formed. Solid rehearsing and some low key gigs saw the release of their first Demo, Let The Freak Show Begin, in 2011. That Demo definitely takes the raucousness of Flogging Molly but takes it to another level with fast Irish folk and Scandinavian raspy but still tuneful vocals. Its been made available by the band as a free download if you like (here). They soon after began work writing songs for their debut album and with a growing reputation as a live act and bolstered by several local music awards this album would be eagerly anticipated not just by their fans at home but also throughout the celtic-punk world. Titled King Of Kings it hit the streets in early 2013 and was eleven tracks of mostly acoustic but upbeat fast played Irish folk that shifts and changes and along the way sounded like most of celtic-punk’s major league players, as well a few that would deserve to be, and added to all that further folk influences sneaking in from all across Europe.

Their new album In It For Life begins with an absolute stormer of a song, ‘Freedom And For All’ with Mattias vocals perched somewhere between Shane McGowan and Joe Strummer it’s a banjo led number that has the feel good factor turned up to eleven and four years on from King Of Kings they haven’t lost any of their bite whatsoever.

‘Amber’s Point’ follows and is more a trad Irish number with a very distinctive Irish intro. Very catchy with a country feel at times and great vocals and lyrics and a banjo/accordion combination to die for! We stay in trad territory next for ‘Every Dog Has It’s Day’ an original song (not a cover of you know who!) and its what passes for the album’s epic slow number except it’s not really that slow but is indeed very epic. It’s the album’s longest track and for me it doesn’t get any better here than this. The accordion drives it along while the band accompany Mattias with the odd yell of ‘Hey!’ and with mandolin giving it that incredible Irish celtic-punk sound we all love so much. The album is only eight tracks and fairly brief at twenty-six minutes long but the Bhoys and Ghirl (an incredible nine members- that’s nearly a football team!) certainly know they way round a tune and the first cover, of two, is up next and yeah, yeah, yeah I know everyone seems to have covered ‘Drunken Sailor’ but there’s an obvious reason to why it’s covered so much and that’s because when its done well it’s quite simply one of the best tunes ever written and here I can be happy to report that Black Anemone turn in as good a version as you will ever likely hear. They keep it short and fast and proper-celticpunk! We are at the halfway point through the LP and next up is the title tune ‘In It For Life’. Again Mattias explains

“In It For Life is our tribute to the love of playing music. The love of playing live, Writing music, traveling and the constant grinding that is the music business today! we are are and will forever be in it for life”

The prominent banjo and alternatively fast punk/ska’ish sound reminds me a lot of our very own English celt-rockers Mick O’Toole. Gang vocals and a brilliant tune that leads us into ‘It’s A Short Life (But A Merry One)’ and they may have turned the punk down a fraction and maybe it’s possibly the odd one out on the album but its still an absolute belter that shifts towards being accordion driven halfway through before joined by fiddle. ‘Hellhounds On My Back’ is next up and funny enough Hellhounds is what fans of English celtic-punk band Ferocious Dog call themselves and the fiddle here gives the song an air of them as well before we get to the last track, and the second of the album’s covers of traditional folk songs. ‘Banks Of The Roses’ was originally made famous by The Dubliners and has been recorded by many Irish and Scottish artists since. The song is given a pretty standard celtic-punk showing and by pretty standard I mean, of course, utterly brilliant!

Sounding quite like The Rumjacks when they get hold of an old trad song Black Anemone give it plenty of oomft and the album ends on very much a high note. 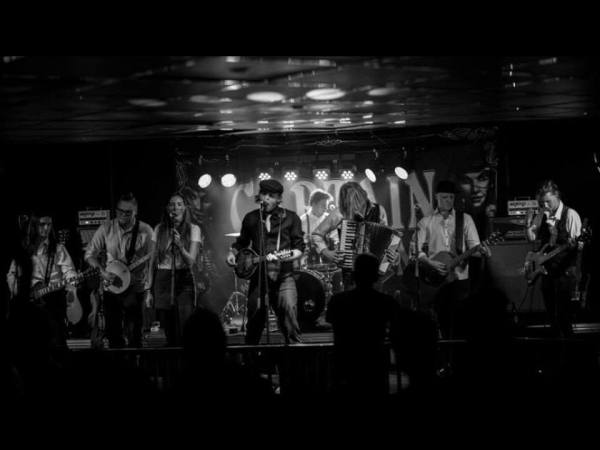 In It For Life came out last June and as you can imagine for a nine piece band the sound is incredible so hats off to Alexander Gabara for his amazing work in capturing the band so perfectly. The band have got it exactly spot-on here with both their sound and the combination of folk and punk and folkpunk all underpinned with the trad sounds of Ireland. A superb album and well deserving of your ear time so don’t delay and follow the links below to hear Black Anemone today!

Buy In It For Life