To put it as simply as we possibly can The Lucky Pistols are an Irish folk punk band based out of Baltimore, Maryland. There.

Back in the year 1816 only 6,000 Irish people immigrated to America but within just two short years tragedy and an deliberate attempt to wipe out an entire race this number would double and would sadly continue to grow for the foreseeable future.  The greatest spike in the number of Irish who immigrated to America came during 1845-1853 the time of The Great Hunger which completely devastated Ireland.  In 1846, 92,484 immigrated and by 1850 that number had grown to 206,041. By the end of 1854 over two million had immigrated to America, astonishingly this was over one quarter of the population of Ireland. These were the lucky ones with the dead left by the roadside at home and many more dying on what became known as ‘Coffin Ships’ on the long torturous journey to what they hoped was a better life. It was during this dramatic exodus that Baltimore experienced it’s boom in its Irish population with close to 70,000 arriving in the city in the 1850’s and 60’s. Those who arrived in Baltimore settled in the southwestern part of the city with the men working for the Baltimore & Ohio Railroad and the women finding work usually as domestics. The work was hard and dirty and dangerous but as employment opportunities were scarce and these Irish immigrants were mainly farmers so due to their lack of skilled labour, they faced a great deal of discrimination and were viewed as inferior people. They lived in tiny crowded and subdivided homes. Unable to afford better housing they were still better off than if they had stayed in Ireland and despite the low wages they were still were five times more than the eight pence a day that a farmer back home earned.

Baltimore became the third most common point of entry for European immigrants, behind New York and Boston.  In 1867, the Baltimore and Ohio Railroad entered into a partnership with the North German Lloy Stemship Line to build immigration piers at Locust Point.  The ships landing at Locust Point would drop off German, Irish and English immigrants.  From there, immigrants could immediately go and work for the railroad or board a train and continue westward. The Irish experience in Baltimore was not a happy one but one of hardship and challenge.

Their children are The Lucky Pistols. 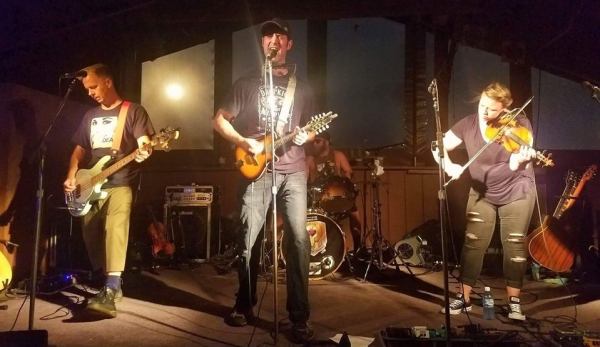 The roots of The Lucky Pistols rather surprisingly begin in the German town of Heidelberg in a band called The Cold Shots. Pistols and good mates Sean and Tony spent five years ago playing Irish folk punk supporting many great Irish punk bands like Paddy And The Rats and The Mahones. As is the way with many immigrants the lure of home became too great and on the break up of The Cold Shots Sean and Tony moved back to the United States in 2013. After a short break Sean began playing solo gigs on the Irish pub scene in Baltimore and Annapolis and it wasn’t long before the Bhoys got the bug and decided to give it another shot and have been trying out their style of Irish folk punk on the east coast ever since.

Where The Orioles Fly is The Lucky Pistols debut album and to their absolute credit have made it available a free download so regardless of what you are about to read you ought to download it straight away. After all who is to say our opinion is worth anything anyway? The album begins with ‘Songs Of Ireland’ and straight from the off its fast paced acoustic Irish folk-punk. Yeah my favourite! I get off on this stuff I really do. A tale of drinking with mates and belting out Irish songs is, I am sure, familiar to many of you. My own brother when he was younger and hadn’t embraced his Irish roots as much as some in the family (ahem…) still knew the words to the entire Irish emigrant songbook. Catchy as hell and that north American celtic-punk sound that definitely has crossover appeal in that it is basically folk music for punks.  I love the harmonica and it is sadly underused in celtic-punk but used to great effect in ‘Girl At The Gallows’. Two songs in and you get a feel for what The Lucky Pistols are about and it’s good. The album’s title song, ‘Where The Orioles Fly’, rolls in next and the oriole is the official state bird of Maryland and the name of the local major league baseball team and tells of Sean and his journey home from across the sea.

Sean’s voice leads the band along and is the more stronger for it. The songs tell stories in that Irish tradition and also in the tradition of Ireland a few drinking songs wouldn’t go amiss and more importantly those warning of the perils of the demon drink and ‘Moonshine (Howlin’ At The Moon)’ is the first here. Country influence especially strong here but not of Nashville but of working men and women far away from rhinestones and glamour. There follows a group of songs with much in common. ‘Downtrodden’, ‘Back In The Harbour’, ‘Walls Of Misery’ all tell of the various struggles of those at the bottom of the ladder. Sad to say not everyone is a “king in the US of A”.

It’s not all doom though as ‘Regrets Are A Waste Of Time’ tells of dusting yourself off when life drags you through the dirt. Great sentiments and not many know the truth of that as much as the Irish do. The music so far has been fast and flowing steady but what I have been waiting for has been a kick-arse ballad and finally I am rewarded with the wait with the penultimate song ‘Drink With You’. Every celtic-punk album needs one and as it the way they usually revolve around a drink or two and The Lucky Pistols don’t buck the trend. Mind you I wouldn’t say its completely a ballad but it still rolls along beautifully and you can class it as the album’s epic. Where The Orioles Fly ends with the classic Irish standard ‘God Save Ireland’ and a song that is very rarely covered which is a shame as both the words and the tune I’ve always thought would make it the perfect song to ‘punk’ right up. Written back in 1867 it was the unofficial Irish national anthem up to the 1920’s and tells the story of three Irishmen executed in Manchester, England for their part in the ambush of a Police transport. The ambush achieved it’s goal of the release of two of their comrades but a shot fired at the lock of the van inadvertently caused the death of the police guard. In the ensuing weeks many local Irish were rounded up and eventually three men were sentenced to death. Despite none of them having fired the fatal shot Michael Larkin, William Phillip Allen, and Michael O’Brien were put to death and became known as the Manchester Martyrs. The songs lyrics were released the day before their execution on 23rd November 1867.

“Climbed they up the rugged stair, rang their voices out in prayer,
Then with England’s fatal cord around them cast,
Close beside the gallows tree kissed like brothers lovingly,
True to home and faith and freedom to the last”

The Lucky Pistols turn in an utterly fantastic version what is without a doubt the highlight of the album. Fast and catchy and thigh slappingly brilliant. A song that is built to last and no better tribute to those people mentioned at the beginning of this article. Sean the vocalist and songwriter of the band takes his inspiration from his Irish nannie (like a true Irish grandson!) and Maryland has a rich Irish culture which is celebrated throughout the year. Throughout the USA Irish culture is holding firm against globalisation and ‘mono-culture’ and bands like The Lucky Pistols play more than their fair share in aiding that. That their music speaks to the grandchildren of those brave Irish souls who settled in Baltimore many years ago is undeniable but their feisty mix of acoustic folk-punk laded with plenty of Irish ‘oompf’ with gather many friends of the Irish around the hearth too.