And we all thought Muirsheen Durkin had gone off to mine gold in California but would seem he got lost on the way to Amerikay and ended up in Arnsberg and started playing some proper kick-arse Irish-Celtic-Folk-Punk-Rock! 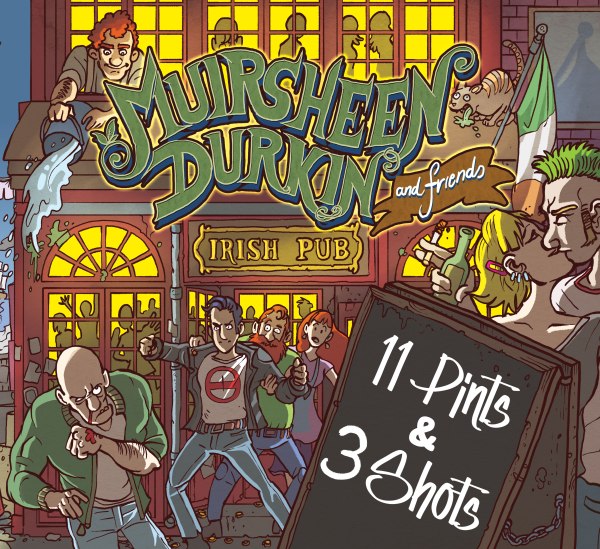 I have a feeling we’ll still be reviewing celtic-punk releases from March well into the Summer at this rate! Here’s another that arrived in time for St. Patrick’s Day and has hardly been out of my ears since. The quality of what we received here at London Celtic Punks Towers has been amazing and when I said I thought Krakin’ Kellys new CD was already the album of the year I hadn’t heard 11 Pints & 3 Shots by this awesome German collective of musicians. 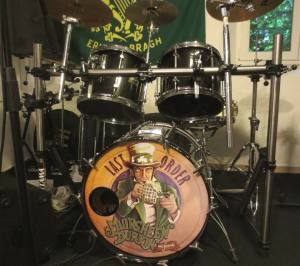 Having known each other for some thirty years it was only a few years back in 2009 that the idea to start something new came up. Wanting a band with its feet based firmly in traditional Irish music and with an emphasis on emigration songs Muirsheen Durkin & Friends was born. Their name comes from the auld song about a happy go lucky Irishman heading off to mine for gold in America during the  California Gold Rush of 1849. The song is unusual in that its a happy song and Muirsheen (a reference to the phonetic pronunciation of ‘Máirtín’ (in English Martin) in the West of Ireland.The feet may be in trad with mandolin, banjo, tin whistle, accordion and two pipers but with the addition of classic rock music instruments the band joined an ever growing scene

” set about re-voicing Irish traditional’s with pulsing bass runs, pumping beats and the use of relatively rare instruments, making it hard to recognize the contemplative shanty or seafaring vocation , Pure enjoyment and a little punk rock is still…”

Modern day celtic music and celtic-punk music has moved away from the areas well known for Irish/Celtic emigration and is now played throughout the world inspired by hundreds of bands throughout the globe. They no longer come from Ireland or London or New York but from Indonesia, Russia, Japan and even China. This is the proud legacy that the Pogues leaves to the world.

11 Pints & 3 Shots is the third release from Muirsheen Durkin with their debut album, Last Orders, hitting the streets back in 2012 and their follow up to that, Drink With The Irish, a four track EP, arriving in 2014 which features ‘The Pogues and Whiskey’ a stunningly great homage to Kings Cross finest. Each release came with mighty press from around the celtic-punk world with everyone from Celtic Folk Punk & More to Shite’n’Onions raving to the high heavens about how good they are.  Formed in the central German town of Arnsberg the band were first revealed to me when they played at the Celtic-St. Pauli football and music festival and loads of fellow Celtic supporters arrived back over here raving about a band they had seen. That was a couple of years ago and with 11 Pints & 3 Shots I finally had the chance to hear them for the first time. 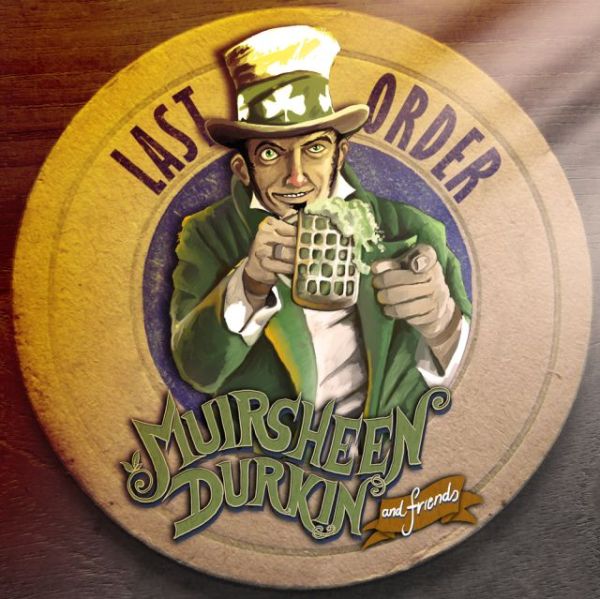 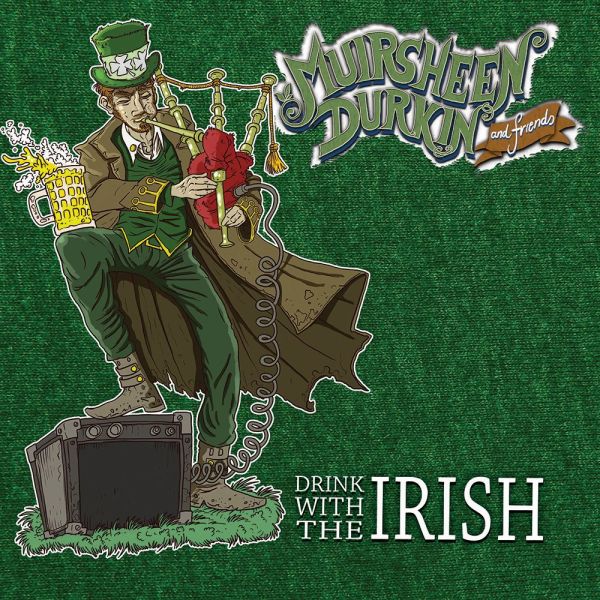 What we have here is fourteen tracks that clock in at three quarters of an hour which includes three instrumentals and and a bunch of songs that you may have probably heard before but done in a style i’m sure not many are accustomed to outside these pages! Mix in some re-workings (updating?) of a couple of songs and a smattering of original compositions and you got yourself one hell of a an album!

So onto the actual review and the fun begins on 11 Pints & 3 Shots from the very off with a great album opener ‘Another Drunken Night’. Self penned by the band this was the song that announced the new release to the waiting public and needless to say it is a corker! Banjo and accordion led with nice drumming it has a definite Rumjacks feel to it but these Bhoys and Ghirls have been around long enough, and on another continent!, to come up with it themselves. A grand song and what a way to start.

The subject matter well have a gander at the video above and you’ll easily work it out. We stay in the pub next for ‘One Whiskey’, another band penned number. The song really evokes an Irish sound to me. This is the Gaelic music music that we grew up here but with plenty more bite to it. Its still folk music but played at a breakneck speed and with a real passion. Vocalist MacRünker was a member of the first Irish folk punk band in the area, Lady Godiva, who released four albums and his voice fits in superbly. Hoarse and raspy but never too much and totally in tune with the music. The bagpipes are out for ‘Itchy Fingers’ and it puts the mental into instrumental. It’s the same tune as The Kilmaine Saints signature tune which I am sure is well known but beyond my feeble memory. A killer of a song and you’d expect it to be from a band with two pipers and where half the rest of the band can pipe as well!

The first totally recognisable cover is the Scots classic ‘Donald Where Your Troosers’. Written by the great Andy Stewart in 1960 while sat on the toilet in a recording studio. The song tells the hilarious story of a kilted Scotsman travelling round London shocking the well heeled residents of London.

“I went down to London town
To have a little fun in the underground
All the Ladies turned their heads around, saying,
“Donald, where’s your troosers?”

This is followed up with another classic Scottish song in ‘Wild Mountain Thyme’ and make no mistake I tells you this is the best bloody version of it I have ever heard in all my days! Folk music is put aside somewhat for a moment as the band punk it up with a thundering bass and MacRünker and acoustic guitarist Sonja and accordionist Mine kick up a real storm on vocals that captures Muirsheen Durkin perfectly. Talk about catchy this album sounds like there’s about twenty people playing and if i never thought I’d hear a better version than you-know-who’s then i was wrong. Another classic cover up next and its one perhaps made famous by The Dreadnoughts, ‘Old Maui’. The song can be traced to records going back to the mid 19th century and tells the story of a whaling ship returning to Maui in Hawaii after a long season of whaling.

The song is strong as any on the album but doesn’t add much to the Dreadnoughts version for me and for a band that really can stamp their brand onto any song maybe it might have been better to cast their net for a less known song. After a smattering of covers the next couple of songs are self-penned by the band and ‘Peggy The Waitress’takes us back to the auld sod of Ireland and a tin-whistle led instrumental that takes in a variety of tunes some sounding familiar and others not before the banjo takes over and leads us until the accordion takes over and then all kick in before we get ‘Land Of 1000 Mountains’ and its a country/Irish folk crossover and again MacRünker’s voice is exactly what is needed here. The song steams along at a steady pace and you know its gonna take off and when it does it lifts the roof. Another album standout here proving they are not just a brilliant covers band but a brilliant band in their own right. Next up we get another cover and Sonja and Mine again take up the vocals on ‘Botany Bay’ and again it’s a great version but perhaps a bit overdone. For a band so in touch with ‘Irishness’ this would be my only wee complaint here. ‘MacRunkers Junk’ is another belting Irish folk punk instrumental with what could easily pass for a ska interlude if they wanted. The tunes fly at you and once again some familiar and some not but they make for one hell of a song when they all put together. On ‘Drink With The Irish’ Muirsheen Durkin pay tribute to one of Ireland’s best ever bands and one that at times could have got you arrested for just listening to! The Wolfe Tones classic rebeler ‘Erin Go Bragh’ is chopped and changed and adapted with love and respect into a celtic-punk number.

“I’ll sing you a song of a row in the town,
When the green flag went up and the Crown flag came down,
‘Twas the neatest and sweetest thing ever you saw,
And they played that great game they called Erin Go Bragh”

Written and arranged by banjo/mandolin player Thomas ‘Lanze’ Landsknecht I bet the tones would whole heartily approve. With the King Of Celtic-Punk’s recent 60th birthday Muirsheen Durkin then pay tribute with ‘Last Of McGee’ written by Shane himself.

“Rope of hemp, around his neck
To hang from an old gum tree
And as he hung
The branch came down, and finished the last of McGee”

You may not have heard it as the song was unreleased and was recorded in 1990 during the recording sessions for the Hell’s Ditch album and produced by Joe Strummer. The song stays fairly true to the MacGowan version and is a timely reminder of the great mans talent. Fast and furious and how could it be anything other than absolutely fecking brilliant!! We are steering up towards the end and the quality hasn’t waned and in ‘When The Pipers Play’ we have what for me is the albums standout track. Originally played by the amazing Black Tartan Clan from Belguim the lyrics are by Muirsheen Durkin and leans heavily on songs as varied as ‘The Water Is Wide’, ‘Danny Boy’ and ‘Auld Lang Syne’. If you like bagpipes in yer celtic-punk then this is the song for you. Absolutely stunning pipes from Andre and Simon and arranged into a completely new song.

11 Pints & 3 Shots comes to a glorious end with the hilarious ‘Botany Bay Reggae’ and aye you guessed it is a reggae infused version of everyone’s favourite emigration song. Now I hate reggae but I love this so there! What a way to wrap up the album and the perfect way!

Overall the album has a fantastic sound. Quite a feat with the amount of musicians at work here and thanks are due to Sebastian Levermann of German progressive metal band Orden Ogan who along with the band members has managed to capture the band perfectly. The CD also comes with a very elaborate twenty page booklet with everything you need to know about the album and with some amazing cartoons of the band drawn by Sebastian Kempke. Last year was the year all the giants of celtic-punk released albums and this year may seem quieter because of that but so far we have a handful of albums that must have the giants quaking in their shoes and up at the top of that list is this one!