Local folk-punk hero Steve White is back but without The Protest Family this time to cement his reputation as one of East London’s finest sweary guitar playing lefties!

This EP had almost slipped my memory when I bumped into Steve in the Leyton Orient Supporters Club bar. Trust me you’d need a drink after watching us this season! Anyway it reminded me that Steve had released a five track solo release and I promised him I’d get my thoughts onto here soon as I could.  Steve is the vocalist of one of London Celtic Punks favourite bands Steve White & The Protest Family. They have featured here a couple of times with album reviews and having played a few of our gigs but its been well over a year since the release of Protest For Dummies so something has been long overdue for this prolific band. Since that review the left has further entrenched itself in the backwardness of identity politics and the divide between the left and the class it’s suppose to represent has never been bigger. As I said then “It’s hard to be left-wing at the moment and certainly there is no joy in being so…” but that was before Jeremy rode over the hill on his white horse to save us. I’m not convinced but there you go. It’s a small light at the end of the tunnel and any hope is better than no hope. In a scene characterised by too serious po-faced lefties and hand wringing earnestness it’s heartening to find Steve White and his merry band still kicking out against the powers than be with their very own brand of bawdy, satirical, revolutionary socialist punk-folk-folk-punk music!

Steve has a certain knack for hitting home his points without that earnestness that puts so many people off. Not to say that the songs on here don’t make serious points or are even told in a serious manner as most are but its the way they are delivered that makes the difference and Steve White knows it. 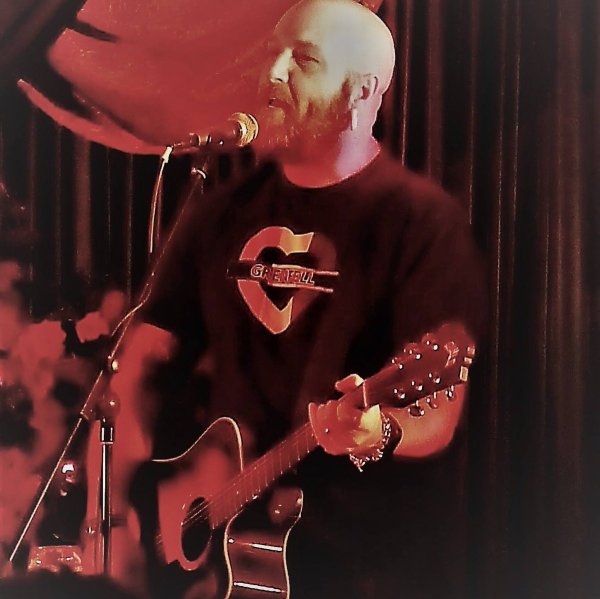 Fake News From Nowhere was released the week after St. Patrick’s Day on 22nd March and has been released as a ‘Name Your Price’ download, more on that later but what better incentive do you need to get this? With several releases as Steve White And The Protest Family and couple as a solo artist Steve has been active on the London scene for a good few years and somehow finds the time away from his job as a firefighter.

Only One Team In East London

Fake News From Nowhere begins with ‘The Death Of Facts’ and the new modern way of media that sees facts making way for feelings and rumours. If people can still lose the argument while using facts than something is seriously wrong. On ‘Don’t Look Down’ the lyrics tell of the ‘I’m alright Jack’ way society has been moving for decades. Steve’s accent is propa Cockney here while the music is gentle. Like a lot of the bands songs the gentle front often hides a passion and call to arms. ‘If The Queen Had A Hammer’ is I think a full band song. It certainly sounds like it. Again the music has a gentle side to it while Steve hammers home a anti-monarchy message while still acknowledging that the Queen is still a human being.

Steve is a wonderful songwriter and the high point here is ‘Children In The Crosshairs’ with lyrics dealing with school shootings but not in as direct a way as you would maybe imagine. An intelligent and sensitive song that makes it’s point loud and clear. The final whistle on EP is for ‘A Song For St. Patrick’s Day’ and absolutely no surprises that it’s my favourite track here. Round every 17th of March English people are found bemoaning the fact that the Irish here celebrate St. Patrick’s Day while St. George’s (the patron Saint of England) Day shuffles by without anyone really doing anything. It turns out that St. George was in fact from the Middle-East so was in fact a refugee from his homeland.

A great wee ditty that sees Steve accompanied on mandolin and will raise a smile I am sure. So another fine disc out of East London and from supporters of the best team in East London too. Five tracks that come in at a rather good twenty minutes and buzzes along nicely sitting. While the folk-punk scene does have a habit of espousing politics in a kind of virtue signalling way you just know that Steve and his merry band both live and breathe their beliefs. Some may not agree with everything they say but I’m sure we can all admire a band that not only packs a punch but also tickles your funny bone while doing it.

(you can have a listen to Fake News From Nowhere below on the Bandcamp player but seeing as its’s ‘Name Your Price’ why not just download the bloody thing!)

Contact Steve (via Steve White And The Protest Family)

You can catch Steve White And The Protest Family live in London this the weekend!