The first new release from Blackbeard’s Tea Party in three years takes traditional songs and folk tunes about the whaling industry and gives them a heavy edge but with a playful arrangement and driving dance rhythms.

Blackbeard’s Tea Party have been together since 2009 and in that time became firm favourites on the English folk scene. An independent band with four albums to their name, Blackbeard’s Tea Party have also completed a number of successful UK headline tours. So it’s been a bit of a mystery as to why they went quiet on the recording front and this is their first release since Reprobates in 2015. They continued to tour and are still as popular as ever but in this game you have to have regular output otherwise there is always another new band waiting in the wings to take your place.

Anyroad they are back now and with this great EP celebrating the history of the whaling industry. Although whaling had existed for thousands of years it was in the 17th century that industrial whaling emerged with organised fleets that by the late 1930’s were killing more than 50,000 whales a year. Communities along the coast around the world have long histories of subsistence whaling and harvesting beached whales. On Leviathan! Blackbeard’s Tea Party play out the history of an industry that once made the fortunes of ports such as Hull, Whitby and Peterhead. Thousands relied upon the practise but it would eventually drive the species to the verge of extinction so much so that in the 1980’s it was banned though many countries still hunt whales under so called scientific purposes.

Leviathan! is the bands fifth studio release and even though only five songs its a mighty fine way to remind any fans who have lost touch that they are still around! The EP begins with the traditional folk song ‘The Diamond’. Popularised by Scottish legends The Corries (check out their version here) the song first appeared on Ewan MacColl and A.L. Lloyd’s 1957 album Thar She Blows! Lloyd recorded it again in 1967 for his album Leviathan! Ballads And Songs Of The Whaling Trade. I would guess these two releases have been very much influence on Blackbeard’s Tea Party.

On the song A.L. Lloyd commented on the Leviathan! album sleeve notes:

Sad events lie behind this most spirited of whaling songs. By the 1820s the relativity milder northern waters were fished clean, and whalemen were having to search in more distant corners of the Arctic, notably round the mighty and bitter Melville Bay in Northwest Greenland. In 1830, a fleet of fifty British whaleships reached the grounds in early June, a month before they expected. But the same winds that had helped them also crowded the Bay with ice floes and locked most of the fleet in, including the Diamond, the Resolution, the Rattler (not Battler) of Leigh (not Montrose), and the Eliza Swan. Twenty fine ships were crushed to splinters and many bold whalermen froze or drowned. The Eliza Swan was among those that got free and brought the sad news home. Our song must have been made only a season or two before that tragedy for the Diamond‘s maiden voyage was only in 1825. One wonders if the man who made the song was up in Melville Bay, the year of the disaster, and whether he was lost with his ship.

Blackbeard’s Tea Party have always been an innovative band and their version skates through English and Celtic folk music while adding some surprisingly modern touches while Stuart Giddens sumptuous (their description not mine!) vocals ably fit the music. His voice may not be that of a crooner but it is strong and versatile and reminiscent of folk singers of old but without the trademark finger in the ear. They follow this up with the first of two instrumentals and ‘DLFN’, written by the bands Laura Barber and Dave Boston is certainly a bit of a shock. With Blackbeard’s dark bite it chugs along with a real foot slamming beat. The fiddle shines throughout and only adds to the somber mood of the song. Next up is title track ‘Leviathan’, written by Giddens it’s a song that verges (or even passes!) on folk-punk and steams along at a mighty pace with Stuart telling the story of the albino sperm whale known as Mocha Dick that lived in the Pacific Ocean in the early 19th century and went on to inspire the story of Moby Dick by American writer Herman Melville in 1851. This song shows Blackbeard’s Tea Party in all their glory as story-tellers as all the finest folk musicians truly are. The song plays out the excitement of the hunt while never shirking from the blood thirsty reality of a whalers life at sea where these mighty creatures may at any moment strike back and take the ship down. We now have another Boston/ Barber instrumental in ‘The Lost Triangle’. Again the fiddle shines and the darkness of the song evokes the bloody reality of life out at sea. At nearly seven minutes long the song is loud and bombastic and ends with a real doffed cap to the early days of English folk before speeding up again and ending with a real flourish reminiscent of 70’s folk/prog rock.. Leviathan! comes to an end with another traditional folk song, ‘Weary Whaling Ground’. The song is about whaling in Greenland during 1840-50. Again A.L. Lloyd recorded it for Leviathan! Ballads And Songs Of The Whaling Trade and his album notes sum up the feeling of the poor souls aboard ship better than anyone.

“Three emotions dominated the old time whalerman: exultion in the chase, a longing for home, and disgust at the conditions of his trade. This latter mood descended heaviest upon him when the fishing was poor and he became “whalesick” (like homesick, only sick for whales). The man who made the complaint for The Weary Whaling Grounds must have been very whalesick.”

Having added a second drum kit to the band it has given the band a much rougher and tougher edge and with dark material like this it works a treat giving it a doom and maybe even Gothic touch they never had before. Their may be only one new song here with lyrics but the band have turned out two extremely good original instrumentals and have taken two songs from relatively ancient times and breathed new life into them. That new song ‘Leviathan!’ shows the new found power of the band and their flair for storytelling which places them in a direct line from the likes of Ewan MacColl to today. There was a time when the folk purists (or snobs as we call them!) would have approved of Blackbeard’s Tea Party but maybe they are trying to distance themselves from the ‘party approved’ AOR folk of the likes of the Mumford’s but the move into darker territory suits them well. 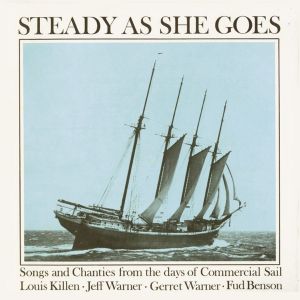 For more on the sea why not dip your toe into our Classic Album Series review of ‘Steady As She Goes. Songs And Chanties From The Days of Commercial Sail’. Released in 1976 the album is dedicated to the workers of the sea. Undoubtedly hard and very often tyrannical under many a vicious Captain’s rule. The workers said “a song is as good as ten men” and the songs were used in the manner of field work song’s. These shanties tell the tales of loneliness, the families these men left behind and the daily hardships of an unkind sea and nautical life.

Many of the albums featured in the series (here) come with free downloads.