The last of our album reviews of Celtic-Punk bands from Hungary is the third studio release from one of the scene’s newest bands, Budapest’s Jolly Jackers. 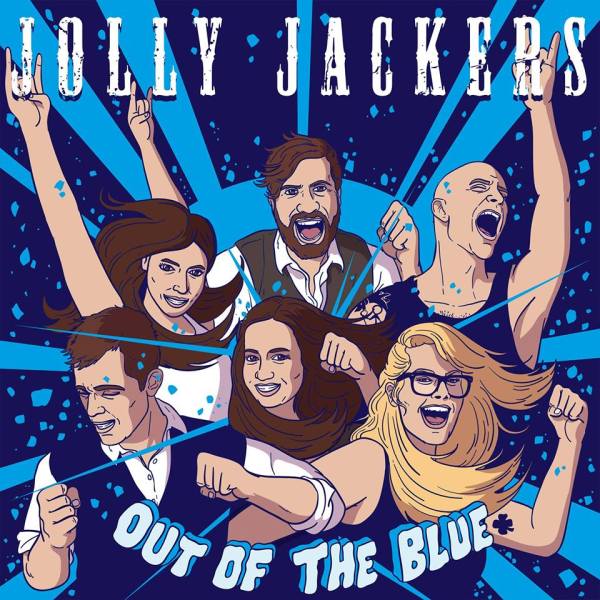 So after the two big hitters of the Hungarian Celtic-Punk scene, Firkin and Paddy And The Rats, were featured these last few days it’s time for one of the lesser known bands and it’s a band that are clearly set for great things in the future. Out Of The Blue is the bands fourth release and sees them take their place alongside the aforementioned big hitters.

Jolly Jackers are a six piece band that hail from Dunaújváros a working class city in central Hungary famed for its steel production. They formed on New Years Day 2013 and their debut release was the superb five track EP Call The Captain which came out for St Patrick’s Day 2014 and is available for free download at the link below.

They followed this up with their debut album Sobriety in January 2015 which again was mostly penned by the band themselves. Sobriety made the Top Twenty of the London Celtic Punks album of the year (here) back in 2015 with its fast paced original brand of celtic-punk going down a storm. Again Jolly Jackers have made it available for free download so again follow the link below to get your free copy.

Their third release was last year’s eight track album Blood, Sweat And Beer which again hit the streets in time for St. Patrick’s Day. Both their albums so far had sailed it at twenty-six minutes so if you like your Celtic-Punk in short and snappy blasts then Jolly Jackers ARE the band for you. Once again it made our end of year Best Of list (here) and came in a very respectable #22 in a year when every big band in the scene released album’s.

So there you are. Plenty of free music for you to whet your appetite for their new release. Breaking with tradition Out Of The Blue came out at the end of April and seals their place as one of the best bands in Hungary. Clearly inspired by both the giants of the scene at home as well as the international greats

The album begins with the creepily beautiful ‘Blue’ a short half minuter that could come straight out of a Halloween movie but luckily we are back on sounder ground as it soon morphs into ‘Billy the Crook’ and the sound of Hungarian Celtic-Punk fills your ear-holes. The sound is immaculate with Sztivi’s vocals clear as a bell and his English perfect as well and as Jolly Jackers are a story telling band that’s good. The other thing I picked up on straight away was the use of the flute and Rea’s playing was faultless. It’s not an instrument you usually hear within Celtic-Punk but in Europe, especially in Hungary it would seem, it has become an integral part of the band. They follow this up with ‘Rich, Famous & Cool’ and it’s a nod to pop-punk with its lyrics about a musician setting off to become famous but when his partner becomes pregnant he has to sell his guitar.

A wonderfully positive message and the uplifting music that combines short snappy distorted guitar with fiddle. In a somewhat crowded music scene in their home country it must have been tempting to try a shortcut and emulate one of the more famous bands but that is not Jolly Jackers way and they have managed to come up with a very original take on Celtic-Punk. They add in some trademark jolly-ness next with the catchy foot-tapper ‘See You at The Sea’. A jaunty song that while gentle does sit well in amongst the harder edged songs. They stretch out their influences further with ‘Chameleon’. Beginning with acoustic guitar and Sztivi’s it has a real country edge to it before half way through the song kicks in and they turn it into an anthemic Celtic-Punk rocker. At just over four minutes it’s the albums longest tracks and towards the end the band go to town and thrash it out. I would love to hear this at the end of the night it would bring the house down! They follow this with ‘War’ and heavy guitar and flute dominate the song. Within the song are several fiddle solo’s and changes in tempo that really give it something. My favourite song here.

“Freedom is not about blood in the grass
Not about children without their parents
It’s not about death it is not about gore
You say it’s for freedom, but it’s all about war”

Jolly Jackers turn the mood up for ‘Dancing Shoes’ and it’s a short folksy twee number played fast and with spirit while ‘Lies’ brings out the Celtic-Punk guns in a song about no friends of ours, politicians!

‘Deaf And Dumb’ continues with much the same with the band experimenting with electric guitar and fiddle solo’s and a heavier punk sound then the rest of the album. We are coming towards the end of Out Of The Blue and ‘Demons And Angels’ is the nicely told story of a soldier dreaming of his wife while on the front line. The tune is also a simply played Celtic number but with solid punk backing. They keep the first big surprise till the end and ‘Until We Meet Again’ is beautifully sung traditional Celtic number. Absolutely stunning. The album ends with the instrumental ‘Surprise’ and sure they couldn’t have picked a better song title with its lounge lizard jazzy electric guitar joined half way in by Noémi on fiddle. A very unusual way to bring the curtain down and i’m surprised to hear myself saying that yeah it fitted in exactly right.

From the album’s cover to the music inside it this is an unusual album. The sleeves colourful cartoon of the band members made me realise that most Celtic-Punk imagery is a bit dark and often stacked with meaning so Jolly Jackers attempt to bring a bit of light into things is very much welcome. Out Of The Blue indeed. They have kept the folk melodies of their previous releases but the punkier elements seem toned down but without losing any of their wild abandon. Not prepared to stick to the script it was nice to find Jolly Jackers willing to take chances and even better that they managed to pull them off. Here is an energetic band with great tunes and an ability to write their own songs that seems to me to be in transition. As the saying goes their is plenty here for everyone to enjoy all of it Jolly Jackers very own.

Buy Out Of The Blue
FromTheBand

Don’t forget to check back in a couple of days for our final part of Hungarian Celtic-Punk Week.