More in the same week from Fiddle Rockers Lexington Field out of San Diego, CA. Playing shows, drinking pints and having a good time! Slainte!

God only knows what possessed Lexington Field to release a brand new EP and a LP on the same day but on reflection it works. Our review of their EP, Modern Times, appeared here last week and while not wanting to go over the same ground I have to say we were extremely impressed with it. The differences between the two releases are stark with the EP harking very much back to the roots of Lexington Field in the Celtic-Punk scene while Dreamers is a thoroughly more rounded affair and lends itself to Flatfoot 56’s offshoot 6’10 or the Murphys/Street Dogs collaboration FM359. pcked with elements of Country, Folk and Americana aside from their Celtic/Irish influences it marks a natural progression from that debut album back in 2011.

As Beau Gray, lead vocals and guitarist and writer of many of the songs here said in a recent interview.

“In the summer of 2017, we started writing songs again. It was time to write about all the positivity and hope we experienced in our daily lives. Love, family, our children, and the dreams we were so blessed to have come true, inspired the songs of both albums. Dreamers is an uplifting, catchy record, one we always wanted to write, and finally decided to take the leap into a more inclusive, all-ages sound. Five songs really tapped into our pop punk roots, which lead us to separate them from the pack, and give them their own home in Modern Times. We are very proud of all these songs and hope the positivity stands out and represents us as the artists we have become over this last decade. Our family, friends, and fans have supported us all these years, and both albums honor them. We are humbled, and very lucky to continue to create fiddle rock music in Lexington Field.”

Both releases came out today on Thursday, November 1, 2018 and the ten track Dreamers, is Lexington Field’s fourth full-length album in nine years along with a very fine selection of EP’s along the road. Both releases were tracked at Weathertop Studio (Anza, CA) in the Spring) by long time collaborator Matt Maulding, formerly of the brilliant celtic-punk band Brick Top Blaggers, who also performed keyboards, harmonica and backing vocals alongside Beau and Bryan Hane on electric and acoustic  guitar, Cami Smith on violin, Nick Sitar on drums and percussion and Nick Freeling on bass. 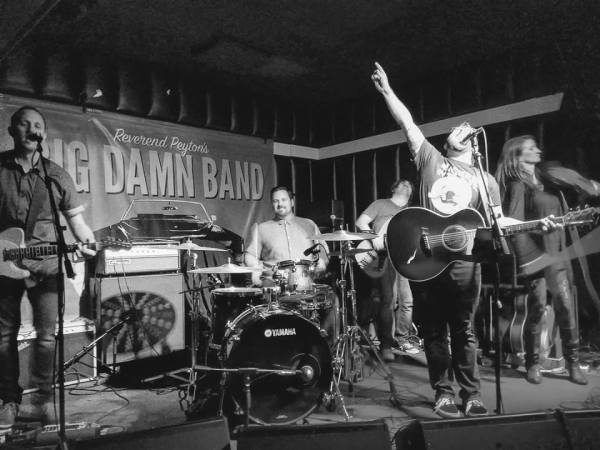 Here they are in the throws of ecstasy at their double-record release party with the legendary and super amazing Reverend Peyton’s Big Damn Band (if you don’t know them then definitely check them out too… after Lexington Field though) at the Soda Bar in San Diego just last night! I’d have given my left arm to be there with you bhoys and ghirl!

Dreamers begins with the absolutely wonderful ‘Crazy Love Song’ and Beau’s happiness is evident all over the song as it takes in influences from across the United States even at one point nearly venturing into the more folky side of college bands like R.E.M. It really is a fantastic start but i will stop short of singling it out as, and i doubt this will shock anyone, I love every single song on this album. It really is that good. It may not be full on Celtic-Punk but I’ve noticed a shift in both artists and fans to tone down the more punkier side of things and as I enter my fifth decade in a couple of years I find myself absolutely enraptured by releases like this and this is certainly one of the best ones you’ll hear. With ‘Crazy Love Song’ still ringing in my eyes it time for the first single release from the album and ‘Bright Blue World’ carries on in the same vein with bouncy and catchy folk to make your heart melt! The official video was filmed by Chung-i Wang at Yore Studio in San Diego and edited by Beau.

The songs roll off and the joy seems into you but its not a cheesy kind of thing but the band opening themselves up and having to guts to tell us their inner most secrets and frailties and the righteous aim to become better people through sharing their lives with their loved ones. ‘Greater Than The Sea’ leads us up to ‘Nashville’ where they slow it right down and Cami’s sad Irish fiddle laments while Beau sings of moving to the home of C’n’W and I always love hearing the harmonica. Though not exactly Celtic i always thinks its criminally underused in Celtic-Punk. They pay tribute to their home in the relaxed  ‘Diego Nights’ and next to ‘Michigan’ though not sure what the connection is there but the song is utterly beautiful!

Their are moments here where Bruce Springsteen could be channeling his Irish roots and ‘Honey’ could easily fall from the Bosses lips though not with the same emotional range as Beau. Cami’s fiddle rages through ‘The Lumberjack’ with a harder edge to the previous songs as the story of the lumberjack unfolds. We coming towards the end and they go out with a bang with ‘Story Time’ and ‘Saint Oliver’. Two songs that continue in the same catchy vein and lead us gently to the end of the album and Beau extolling of family is a great way to bring down the curtain.

A couple more things to add here before I leave and one is the pure quality of Beau’s writing. As proved by this double release he can flit from downright humour to pathos and sadness and pure joy with ease. He is maybe the perfect example of a Celtic-Punk singer/songwriter and it’s that range that makes Lexington Field such an interesting band. The other thing is the effort they always put into their releases and the artwork and I would suggest if possible to get the physical CD to really appreciate Dreamers. Lexington Field are one of the mainstays of the American Celtic-Punk scene and with this record their popularity is sure to grow seeing as it will impress new fans and please anyone who has been following their career to date. A wonderful record. Here’s to many many more.

(Treat yourself and have a listen to the title track on Dreamers on the Bandcamp player below. Then your only decision should be whether to get the Download or the CD!!)