Far too often bands from outside the Celtic diaspora seem to think that Celtic-Punk is solely down to the influence of the Irish when in fact every Celtic nation should be credited. Today’s band give it away in their name where they get the majority of their sound from. Scotch hail from the small town of Weyer in Upper Austria and and have been together since 2013. Their debut album, Scotch The World, hit the streets on 8th March, 2013 and was twelve tracks of nearly all original Scotch songs with Scottish bagpipes and Irish tin-whistle put to dynamic punk rock beats. You can hear that debut album below on the Bandcamp player.
New release Last In The Bar kicks off with the auld sea-shanty ‘Bully In The Alley’ but brought bang up to date from it’s 17th century roots in Africa. The ‘bully’ of the title refers to being shitfaced as we might say today. The song begins as a group acapello version before the music kicks in and we end with a fast and furious 105 seconds of bagpipe driven punk rock. Gégé’s vocals are absolutely crystal clear and sound so authentically American I had to double check where they were from! Second track is ‘Tough Punks’ and Scotch tear into punk bands that are play at being punk. Great, funny lyrics that remind me of oh so many bands I have known over the years.
There is a new breed of European Celtic-Punk that really knows how to promote themselves through You Tube and Scotch are one of them. Take a look at the video for ‘Generation Fun’ and you’ll see what I mean. A hilarious story to accompany as finer a slab of Celtic-Pop-Punk as I’ve heard in a while. Imagine NOFX or Pennywise but with a bangin’ bagpiper and your almost there.
The fun continues with ‘Liar, Liar’ with more of the same melodic punk rock and pipes, except with the added distant sound of reggae, before title track  ‘Last In The Bar’ hits the waves. Another cracking video for you to watch and the Bhoys pull out all the stops here with rumbling bass and wailing pipes.
And so we come to the final track on this EP and ‘Keep Rolling’ is a great way to go out. An epic sound that builds and builds and tells a good story too. Twenty minutes of original Scotch material that is over far too early and I am already looking forward to a full album. 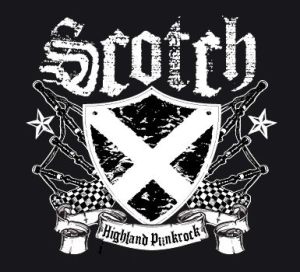 Last In The Bar was released on 5th October 5 this year and was recorded, mixed and mastered by Matthias Reithofer at Far Beyond Recording studios. He has done a grand job as the EP is absolutely faultless. Musically It would appeal to fans of the Dropkick Murphys style of music from a decade ago with the mix of pipes and punk. The band have christened their style as ‘Highland Punk Rock’ and yeah that sounds about right! Now the interesting bit for you simply click on the link below and be directed to a free download of Last In The Bar. Yes, free!!! So don’t delay get to your lap-top and get downloading…