ALBUM REVIEW: THE O’REILLYS AND THE PADDYHATS- ‘Green Blood’ (2018)

Album Review, England, Folk-Punk, Germany, Ireland, Live Review December 9, 2018 1 Comment
Here’s a German band that makes authentic Irish music with their third album release Green Blood. That may sound all a bit strange to yer average Joe but not to London Celtic Punks favourite Anto Morra. The O’Reillys and the Paddyhats are by no means a goose that thinks it’s a fox though they are much more fox and goose in one. This is an album that builds the bridge to those who carry green blood and those who want it. Because the yearning for Green Blood is insatiable. 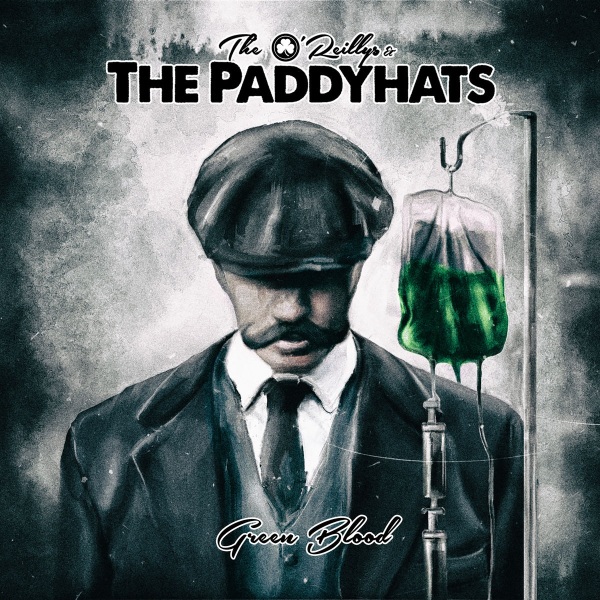 There’s a London Celtic Punk sticker that reads ‘It’s not blood that makes you Irish but a willingness to be part of the Irish nation’ and The Paddyhats are most certainly proof of that. Their latest offering ‘Green Blood’ must surely be a contender for best Celtic Punk album of 2018.
The cover art is exceptional and could even double as an advertisment for Peaky Blinders! Like all their albums to date, this is available on vinyl and appropiately limited edition green vinyl, so definately one for those vinyl junkies and collectors like myself. This is what more records should sound like these days. The mix and production here are second to none. It does baffle me how a singer that is not singing in his first language, is so much easier to understand than the majority of those singing this type of Celtic Punk in their own language. It’s very refreshing. Here’s the running order and little about each song.

Green Blood
Pulled in by the tribal sound of the pounding drum and Celtic mysticism of the uilleann pipes & fiddle, with distorted guitar and bass feedback threateningly hiding down low in the mix and within 30 seconds you know what you’re getting! Green Blood, Green Blood, Green Blood is the chanting war cry and it’s powerful, aggessive and blissful. More Irish than Brennans Bread or Barry’s Tea and a true and honest celebration of the things that make people glad to be Irish and those that aren’t, wishing they were.

Another Town Another Girl
This is the Only Ones ‘Another Girl Another Planet’ meets Donegal Danny. The age old tale of the womanizing blaggard only in this case the man knows he is gonna get his comeuppance when he will ‘Drown in his self made crown’. It’s all very shanty until the stunning guitar solo reminds you that these aren’t a beardy, finger in the ear, woolly jumper and craft beer band. They’re very much Punk Rock.

Circus Of Fools
This one is a belter! The opening verse I can’t help but guess is aimed at the Trump administration but as the song progresses you know it’s a much broader reflection of the sickness of those in power. We are treated to almost Eastern European rhythmic chops on this and it’s two a half mins of no nonsence.

Gamble With The Devil
A perfect folk love song warning us not to gamble, especially with the devil. I don’t want to give too much away in a spoiler alert way, all I will say is that it is a craicin’ little story.

Swing Your Hammer
Starting like an Enio Moricone spaghetti western theme before leaping into a Ska-Punk dance beat and the big chorus in the work song tradition. Wonderfully tight banjo and fiddle instrumental breaks tie this catchy song together.

Promise
Now this is refreshing. A drinking song about abstinence! There’s an old country song that drones on about ‘One day at a time sweet Jesus’ well this is kind of that; but for people that fight instead of pray for the strength to stay sober and look forward to the day they can throw the towel in and get stocious again.

Boys On The Green
A celebration of the beautiful game and the ritual that surrounds it. No mention of fighting, just the pride in your club colours, the comaraderie of meeting before the match for a pint and singing song together on the terraces.

Greg O’Donovan
This one takes us away from terrafirma and puts us in the charge of an heroic captain, as he slaughters Spanish and drowns in the worship of women after. This has a great low whistle or flute hook, that sounds a little like the Fury’s ‘Lonesome Boatman’ on amphetamine suphate.

Roasie Lou
A beautiful bit of fiddle playing helps us feel the heartbreak in this love ballad and lament dedicated to a true love and criminal partner.

This is Our Time
…”To right the wrongs because failure is part of our lives” is the general message I get from this pounding, Poguesesque four minutes of fun.

Rockstar
This is the familiar sentiment for anyone who aspires to make a living in the music industry today. A fabulous female vocal performance and guitar solo puts this forward as one of the best tracks on this record in my opinion.

Yesterday’s Rebel
Craicin’ closing song about an IRA man finding himself in hell after killing a policeman.

LIVE AT FOLK IN A FIELD IN THE SUMMER

Back in July I had the pleasure to witness their live show when the played my local festival in Norfolk. ‘Folk In A Field’ has been going about 4 years now and have had some great acts so far including Ferocious Dog, Punkfolkers, LongShore Drift and the Nobel Jacks – the latter due to headline in 2019 but The Paddyhats topped the bill and nailed it this year.
Their set as well as including songs from their first two albums

there was also time to throw in the odd Irish standard

and the most unexpected.

As well as playing each year, I also run the merchandise stall at ‘Folk in a Field’, so when The Paddyhats turned up, they took over my stall for the last couple of hours. I can honestly say a nicer bunch of people you couldn’t wish to meet. They came all the way from Germany for one show, with a small road crew and giant merch man 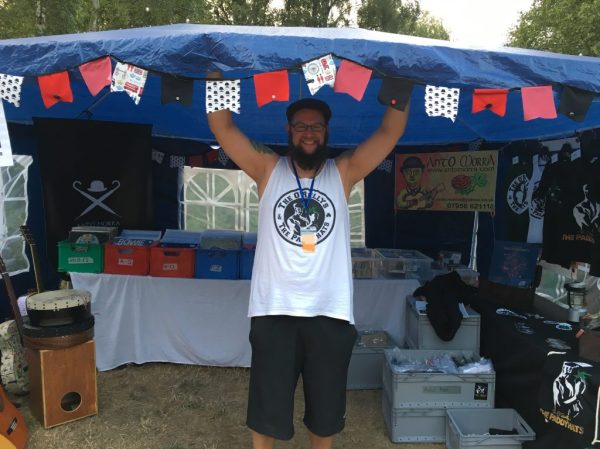 all of which were really easy going, friendly and a pleasure to have at the festival. I just hope they enjoyed it as much as we did. 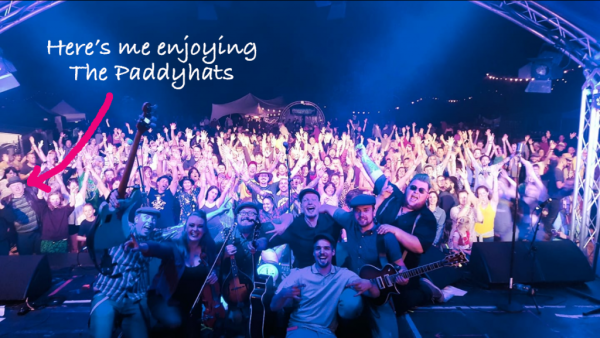 Thanks to London Celtic Punks favourite Anto Morra for the review. Songwriter, performer and multi media artist that believes ‘Life is for laughing and fighting injustice’. Traditional folk songs and punk rock of his formative London years, along with his Irish roots and Norfolk home are the inspiration behind his work. You can catch up with Anto here or just look through the pages here to find several of his releases.

Tagged: Anto Morra, The O'Reillys And The Paddyhats

One thought on “ALBUM REVIEW: THE O’REILLYS AND THE PADDYHATS- ‘Green Blood’ (2018)”