“On the 1st day of March it was raining…” so sang yer man and if the Celtic nations ever do get more than a cursory glance then March would a perfect time to do Celtic History Month. With today being the feast of St. David of Cymru, the 5th for St. Piran of Kernow and the 17th Ireland’s for St. Patrick then we can safely say that March belongs to us. To get us in the right spirit we thought we’d give a shout out to one of the lesser known bands on the scene the Backseat Hooligans out of South Central Pennsylvania and Maryland. Good friend of the band Johnny Piper of brilliant fellow Celtic-Punkers Alternative Ulster popped along to their show a week or so ago to check out the competition and was suitably impressed.

February 17 in Poughkeepsie, NY saw the kick-off show of The Dropkick Murphys’ annual Spring tour culminating in their St. Paddy’s Day Boston bash. Central Pennsylvania’s Backseat Hooligans took the opportunity to stage a road trip and perform a pre-show party at Mahoney’s Irish Pub down the street from the concert venue. 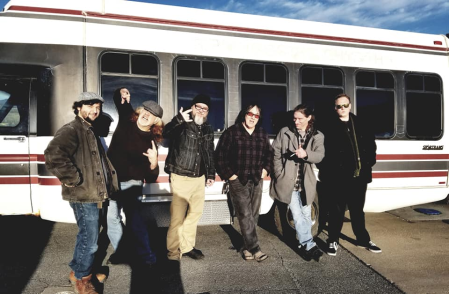 the Bhoys about to set sail…

Reminiscent of The Go Set and The Real McKenzies, their 90+ minute set kicked off with a bagpipe jig by Chris Spagnolo that built into a wall of sound as the rest of the band joined in. This lively tune morphed into an abbreviated DKM’s ‘The Boys are Back’, with multiple band members lending enthusiastic voice to the chorus. The six lads certainly seem to enjoy each others company, a necessity given how far they traveled together in drummer Johnny Sexx’s epic tour bus. The dedicated Johnny drove six hours one way from south of Baltimore to central PA to pick up the lads then on to Poughkeepsie. Ever gracious and supportive, The Hooligans stuck around for Alternative Ulster’s set prior to retracing their six hour odyssey. Next the bagpipes laid down the melody of Johnny Cash’s ‘Ring Of Fire’. Speaking of rings, Mahoney’s 2nd floor dining level is open to the lower stage level through a giant circle decorated with the crests of all 32 Irish Counties. During the song, the circle was lined with the toddlers and children of diners above enthusiastically dancing their diapers off. The Hooligan’s sound is infectiously vivacious.
(‘Battered Mug’ from the Backseat Hooligans upcoming EP.
Due out soon so watch this space for more to come!)
The band moved smoothly and rapidly through well rendered versions of ‘Galway Girl’, The Real McKenzies’ ‘10000 Shots’, a bagpipe driven medley of ‘Itchy Fingers’ (a difficult reel well executed), ‘Scotland The Brave’ and ‘Willie Nae’, onto ‘When Johnny Comes Marching Home’, ‘I Fought The Law’, ‘Drunken Sailor’, and The Stanfields ‘Dirtiest Drunk’. Numerous songs were punctuated by excellent lead guitar riffs by Arik Trimmer.

the quiet before the storm…

The Hooligans have recently been recording new original material and the two original songs they performed at Mahoney’s were the highlights of the show for this writer. First off was ‘Old Battered Mug’, a tribute to their local speakeasy which starts quietly with front man Keith Kelly singing the chorus accompanied only by mandolinist Dave Garry, followed by four quick stick clicks and the full band launches into a mighty sound with the bagpipes carrying the melody and the guitar and rhythm section with A.J. Mitchell on bass delivering an energetic punker. Things mellowed briefly with a fine rendition of Mr. Irish Bastard’s ‘I Hope They Sell Beer In Hell’ only to be amped up again with the ubiquitous ‘Shipping up to Boston’, the familiar jig line played on mandolin and, rather uniquely, Chris Spagnolo’s saxophone.

A ska version of ‘Kiss My Irish Ass’, ‘Fields Of Athenry’ with the melody carried by bagpipes, something that sounded like ‘Skinhead On The MTA’, ‘Tooraloo’ and ‘Not Your Stepping Stone’ (perhaps only a coincidence that Peter Tork died soon after) led to the second, excellent original, ‘Pints Of Whiskey’, the opening guitar riff of which had me looking to the bagpipes as the source of the fantastic sound. Both originals were total class and here’s hoping for many more. Like many an Irish punk band before them, the closer was AC/DC’s ‘It’s A Long Way To The Top’ and these lads do not suffer by comparison. The large (especially for 4 PM) crowd demanded an encore which was duly delivered with the bagpipe-centric traditional folk tune ‘Blooming Heather’ (a/k/a ‘Wild Mountain Thyme’ a/k/a ‘Purple Heather’ a/k/a ‘Will Ye Go, Lassie, Go?’). Unwilling to go was the piper, who played on as if only just getting started, a fabulous conclusion to a fabulous gig.
Contact the Backseat Hooligans-
Facebook   YouTube  Instagram  Twitter
As we have said a thousand times it’s not all about you know who (and you know who) its the little bands that makes a truly great scene and Backseat Hooligans are as important in it as anyone. We urge you all to continue to check out the lesser known bands in Celtic-Punk and never be put off by them being across a ocean or a continent as that means very little these days. Big thanks to Johnny for taking the time out to write the review and if you wish to see Backseat Hooligans they next take the stage at the Kingston Kilt Festival on March 9th and before anyone gets too excited this is Kingston in New York not Kingston on the outer edge of south-west London. A very easy mistake to make believe me! The festival is being held at Tony’s Pizzeria at 582 Broadway, Kingston, New York and you can find more details here at the Facebook event.