Crusty punk troubadours from the middle of England playing Anarcho-Celtic-Punk ballads and rampaging through folk tradition!

Bags o’ Craic arrived at London Celtic Punk Towers towards the end of 2018 on a scruffy home made CDR with a basic photocopied cover and a couple of stickers that wouldn’t play on any of the CD players in my house or my laptop!! So it was with great relief that the band recently stuck it up on Bandcamp so I could finally get round to hearing it. Having checked them out on Facebook they seemed like they were a band i would be into and after a couple of listens this was confirmed!

Bags o’ Craic is twelve songs that fly past in an incredibly quick twenty-four minutes. Songs beloved by the folk purists are stripped right down to basics and played without frills or flourishes which for many of these songs that is exactly how they were meant to be played when first written. The roots of The Tenbags lie in Niall and Ben’s meeting at Birmingham art school back in 2009. A shared interest in folk music thanks to Ben’s Irish background and Niall who had grown up obsessed with Bob Dylan and Woody Guthrie and The Pogues before getting into Punk. Coming from a half Scottish/half Indian background he ingested the folk music from his Mam’s record collection and the Pogues from Celtic Supporting, Celtic-Rock loving Uncles!

The album kicks off with ‘The World Turned Upside Down’ a song originally penned by folk legend Leon Rosselson which tells the story of the Diggers (English radicals seen as forerunners of anarchism) rebellion on St. Georges Hill in Surrey in 1649.

It has been recorded by several artists with perhaps Billy Bragg’s 1983 version the most popular. Here it is played fast with sparse backing of acoustic guitar, fiddle and mandolin with Niall’s vocals leading. These days their is such a market for Irish music that the temptation is to perfect and polish everything so that the pub cover gigs keep rolling in. This is a long way from the roots of Celtic-Punk and Shane could never ever have been accused of trying to croon his way through things and it is to Shane’s tradition that Niall continues. This is followed by a cover of ‘The Blackleg Miner/ You Made Your Bed’, a song that has recently been covered by Ferocious Dog and regularly features in their live set. From the mid 19th-century the song is set among the Northumberland pit villages and spits vengeance against strike breakers otherwise known as scabs to the miners and their families. A subject close to Niall’s heart as his family in Scotland were from the mining community, seamlessly flowing into the original track ‘You Made Your Bed. One of the best tracks here is the cover of Tom Paxton’s ‘Johnny Got a Gun’. The heartbreaking tale of a child who is bullied at school so gets the means to defend himself that ends in utter tragedy and contains one of the best lines I’ve ever heard.

years. Do yourself a favour and check out the great Tom Paxton’s version as well here. Next up is a spoken word piece ‘Banned From The Tesco’ where Niall spits out the words at us in just seventy seconds leading into a couple of covers of minor classics starting with the Crass song ‘Securicor’ and followed quickly by The Exploited’s ‘Alternative’ sounding as unlike Crass and The Exploited as you will ever hear. The Tenbags take the songs and breathe a life into them I would never have thought possible. That anarchic punk rock spirit shines through in the spoken word sections. These use to popular in Punk Rock, especially on Oi! compilations, but has all but disappeared these days so the thirty second angry anti-war rant ‘Grandad’ is both a blast to the past in subject matter and its very existence. The covers chosen here sound to me to have been picked very carefully and Bob Dylan’s  ‘When The Ship Comes In’ leads us into another anti-war rant in ‘Warlords’ before the album’s highlight hits the airwaves and in ‘Bella Ciao’ Niall perhaps comes as close here to singing in tune! The Italian anti-fascist anthem dates from the rice fields of the late 19th century but it was revived by the anti- fascist movement active in Italy during the Second World War with it’s lyrics updated. The next song also harks back to Crass in the albums second original track ‘The Man Who Spoke To God’. There follows a couple of minutes of silence which may be a nod to Crass and their problems with the song ‘Reality Asylum’or could be that the final song is meant to be a hidden track! The album comes to an end with the classic Irish traditional lament ‘The Parting Glass’. It was maybe too obvious to cover something that Shane was well known for singing but The Pogues did get round to singing ‘The Parting Glass’ and here The Tenbags keep it simple an play the song as it is meant to be played, slowly. 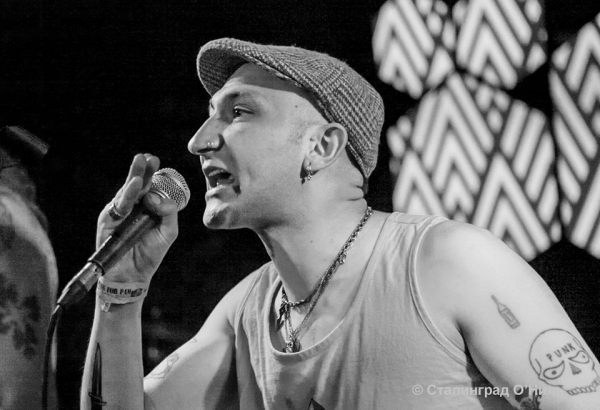 So an album that you will either be able to get past Niall’s style of vocals or not but as I’ve said we are in a scene where we worship a man who couldn’t sing for toffee so you should never let that put you off. The music is extremely well played and the arrangements sparse with the songs chosen far beyond ‘folks greatest hits’ and with some great and unusual and unexpected punk covers thrown in to. The energy and passion here is evident on every single track and with the band having made the album available for free download you have no excuse not to get a copy. Simply click where it says Buy Digital Album and this will take you to a page where you have the option to name your price where you can simply type in £0.00 and you will receive the link for your freed download.