The roots of Alternative Ulster began in March 2015 in NY State’s Catskill’s region. Since then album’s have have been released at regular intervals starting with their debut album, Rebellion. Raw punk rock with Highland bagpipes or as piper John McGovern says ‘1916 meets 1977′. A reference to both the Irish Uprising and the year Punk Rock exploded onto the streets of London. An amazing three albums last year with Pog Mo Thoin, then Boobies, Bagpipes, Banjos & Beer’ and finally the Christmas themed Merry Feckin’ Christmas kept their name in the air and so it is again with the release of Craic Agus Ceol last month which translates quite simply into Fun And Music. 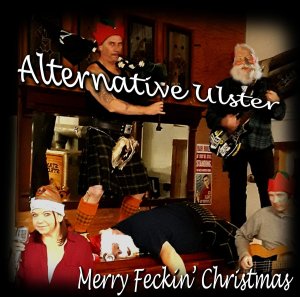 The album starts off where all the other albums have left off. The guitars may not be fast but they are hard, heavy and loud and the same can be said about the pipes too! Though we are in for a shock as the singing starts and Wendy takes over the vocal duties. A strong voice that fits the music well and we not one of those sites that’s going to go mad just because its a women it is still a refreshing change. It was while recording their Christmas album the Bhoys thought it would be cool to get a female voice in for some vocals and so blown away were they that now Wendy has become a full member of the band.

(hear Merry Feckin’ Christmas below on the Bandcamp player)

On ‘It Took A Lot Of Love (To Hate You The Way I Do)’ the band have a perfect vehicle for their sound in-between the rocking of AC/DC and the Celtic of the Dropkicks when they thrash it out. Next up is a song very close to our hearts. In fact we were the ones that suggested Alternative Ulster might cover it 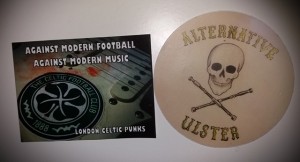 and cover it they have done. They took the simple acoustic folk of Pól MacAdaim’s ‘Justice For The Craigavon 2’ and have turned it into a proper punk rock anthem. Telling the story of Brendan McConville and John Paul Wootton two innocent guys who were convicted of the Murder of PSNI constable Stephen Carroll and sentenced to life imprisonment. London Celtic Punks firmly believe that the case was corrupt and the ‘evidence’ used inconclusive, contradictory and discredited. Both men found themselves victims of a system that sought to find scapegoats in the wake of the political and media backlash following the killing. We are doing our wee bit for the lads over on our Bandcamp page where every single penny raised goes direct to the #JFTC2 campaign.

A rousing and righteous track where this time it’s Todd that spits out the angry words while on ‘Port Of New York’ Wendy returns to vocal duties and again its that heavy rock/punk sound dominates while Johnny’s pipes wail along in the background on a song that tells of the ‘welcome’ the Irish received on arriving in the States.

“We were not welcome
But you feckin got us now!”

is but one of the excellent lines in this song. A fantastic song that really gets the blood pumping and easily as good as any modern day rebel song I have heard. That love of Irish history again rears its head during ‘Battle Lines’ a slower heavy number about Irish people forced to take part in the American Civil War. To fight or starve many were signed into the army as they disembarked ships not knowing what they agreeing to. 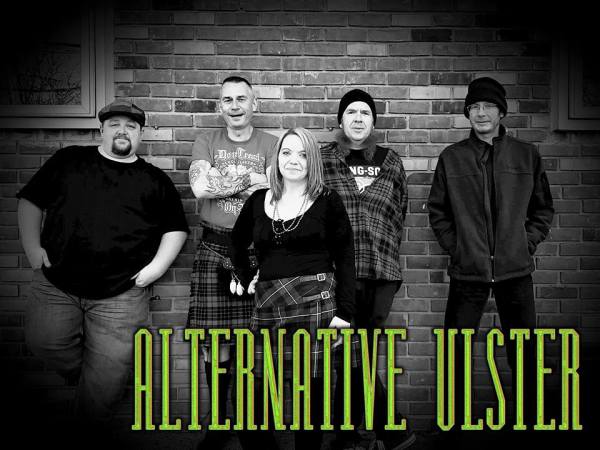 One of the things I loved on previous albums was Alternative Ulsters choice of unusual covers and they don’t disappoint here either with the Eurythmics ‘Sweet Dreams (Are Made Of This)’ with Wendy taking on the role of ‘Scots’ unionist Annie Lennox.

‘Drunken English Punk’ has Todd loudly reciting the angry words over a Celtic-PUNK tune while and ‘Swine Before Pearls’ also takes an different path to the rest of the album. While the rock element of the album has been self evident they take it to another level here with a slow(ish) rock ballad with Wendy’s powerful voice again dominating proceedings. Next up is ‘Punch A Nazi’ and a sentiment we can all agree with especially the band as they all had family members who fought actual Nazi’s in the 2nd World War.

The only thing I would add is not to get carried away and start believing everyone you don’t like is a Nazi. Sadly a trait all too common in America and now stupid ‘identity politics’ are infesting politics over here as well. Short and sweet and to the point Alternative Ulster don’t go in for subtleties! Next up is probably the song that most divides the Irish communities around the world with it being the most popular song in North America but thought of as being among the corniest of Irish songs! Still, here ‘Danny Boy’ is given a face lift that would melt the hardest of faces with Todd and Wendy combining on vocals (something the band should experiment with a lot more as it sounds absolutely brilliant!) while Jay’s chugging guitar, Johnny’s wailing pipes making it one of the highlights of the album. Not something I ever thought i’d say about ‘Danny Boy’ ever. Alternative Ulster play music from both the heart and the head and occasionally the sleeve too as on ‘If It Ain’t Scottish It’s Crap’ which a good Catholic boy like myself cannot tell you what the song is about suffice to say its great craic and the piping here is amazing. We are nearing the end and the last of the self penned tracks ‘Drinking Tonight’ which again takes the rock road but is catchy and a with a great driving tune. All the Alternative Ulster lyrics were written by either piper Johnny or guitarist Jay and the tune put together by the band which leads us up to possibly the best known Celtic-Punk song of all time and well I couldn’t actual believe it when I saw it was a cover of a cover! I must have played and heard ‘Shipping Up To Boston’ 1000’s of times but never did i know it was written by Woody Guthrie!

Sadly I couldn’t find a video of Woody recording it so if you know of one please leave it in the comments. Alternative Ulster give it plenty of oompf and to be honest its as perfect a song as any written and would be impossible to play it any other way than utterly brilliantly!

They surely can’t keep up the pace of three albums a year but even one we’d be happy with! Plans are afoot to bring their raw rock’n’roll bagpipe Celtic-Punk rock over to these shores in the summer and London Celtic Punks will of course be heavily involved in helping out so keep your ear to the ground for more details of that as they come in.

To find out more on the Craigavon 2 case please visit either jftc2.com or on Facebook here. Offers of help or donations via PayPal are welcomed at justice4thetwo@gmail.com and check out the London Celtic Punks Bandcamp page here for a list of albums available for download for free or donation to the campaign.