2019 REVIEW ROUND-UP’S PART THREE: THE REST OF THE WORLD. THE CHERRY COKE$, AIRES BASTARDOS AND ANGRY ZETA & THE HILLBULLYS

Welcome to the third and final instalment of our yearly Round-Up of Celtic-Punk, and related, releases from the past twelve months. As the scene becomes more popular we are finding it increasingly difficult to keep up with everything so for a week in December we give a short mention to those bands that have slipped the net. Each and every band here are worthy of your time so please be sure to check them out. To start with in Part One we featured releases from North America (here) and in Part Two Europe (here) so here in our final round-up of 2019 we have releases from Japan and a couple from Argentina as well as an Argentinian Celtic-Punk playlist put together by out good friend Pablo that I recommend you check out and a South American Folk-Punk compilation from last year that we somehow missed and is also highly recommended.

The Cherry Coke$ may have one of the daftest names in Celtic-Punk but they are far far far away from being any kind of joke band. Celebrating their twentieth anniversary with the release of their ninth (!!!!) album Oldfox Japanese Irish rockers The Cherry Coke$ were probably the first band in the scene from outside of one of the ‘traditional’ Celtic-Punk countries (the ones with substantial Celtic diasporas) to become famous. Basically playing fast as hell trad Irish folk they became as close to superstars as is possible in the Celtic-Punk scene for a while and though their star may have waned a little over the years that they are still producing the goods recording wise is testimony to how good a band they actually were and still are now too. They have got a bit faster and a bit punkier but the unmistakable sound of Irish music can be throughout Oldfox. With a multitude of members playing every imaginable Celtic instrument yet it always seems, just like the band that influenced them the most- The Pogues, to always be leading the way.

As far as I can tell the whole album of eleven songs are all original material with many standout songs like the opening track ‘Hibana’ which takes in elements of Ska and Metal as well as Folk and Punk and all are played with an incredible passion and energy and respect.
On the banjo heavy ‘Public House’, you have an uplifting Irish song that will have you stamping the floor while on ‘Social Network Slave’ they offer up something more akin to what Bruce Springsteen is making these days. The song is heavy in places while delicate in others while also criticizing modern society and the alienation coming from our over reliance on social media. The songs are sung mostly in Japanese and it is in the albums shortest song that I feel the true spirit of The Cherry Coke$ comes out. ‘Of Music’ is a sort of pop ballad full of innocence and love for music. Another outstanding song here is the album’s closing track ‘Brigade’ where they get as Poguesy as you can possibly get. Fantastic record and here’s to another twenty years, and another nine albums too!!
Contact The Cherry Coke$  Facebook  Twitter  Spotify  WebSite  YouTube

A few years ago Brazil was the leading country in South America when it came to Celtic-Punk but slowly and surely the balance of power has slowly been moving to the country that is Brazil’s great rival in everything- Argentina! With several bands on the go at the moment (more on them below) Aires Bastardos have released their debut album onto the scene and it is a corker as we say in England. We get eleven songs clocking in at almost forty minutes and though the majority of the songs are Aires Bastards originals their are a smattering of inspired covers as well. Lets get them out the way first with two great versions of The Ramones ‘We Want The Airwaves’ and Cock Sparrers ‘Because You’re Young’ which adds fiddle and banjo to these great songs while Pablo’s gravelly voice is perfect for belting out these numbers which are definitely in the Celtic-PUNK scheme of things. Singer Pablo is also responsible for most of the lyrics here and is a well known member of the Celtic-Punk scene networking across the web and promoting not just his own band but in the spirit of Celtic-Punk all the other Argentinian bands as well in #OneBigCelticPunkFamily ! The third cover here is the auld traditional Irish folk song ‘Drunken Sailor’ and to say it is well covered is a bit of an understatement with just about everyone having a go at it at sometime. Assisted on vocals here by Zeta Vaccaro from Angry Zeta And The Hillbullys (more below) and Gabriel Leão from their Brazilian next door neighbours the Celtic-Punk band McMiners. The rest of the songs are sung in the bands native language, Spanish, so thanks to the English education system when it comes to learning languages I don’t have a clue what the band is saying. So only going on the music it definitely has a ring to it of other Spanish language bands like Brutus Daughter and 13Krauss and the three Celtic instruments of banjo, fiddle and tin whistle are evident throughout but they have a lot more to offer than that. The songs are catchy and cool and veer from pretty much standard Celtic-Punk to Folk and back to fast as hell Punk but in a really accessible way that will have a wide appeal. I loved this album and for a couple of weeks in November I listened to nothing else!! The band have put the whole album up on YouTube for free but it is also available from Apple Music to buy. 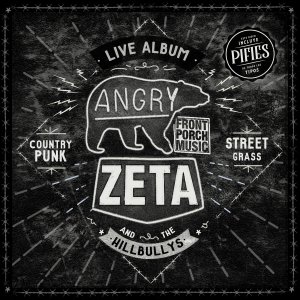 With Celtic-Punk releases from the ‘Rest Of The World’ being a bit thin on the ground in 2019 I have had to cast my net a bit far this year to reel in some bands that will interest you all. I actually came across this band while writing the review for Aires Bastardos above and with one click of a button I found a new band to love from Argentina! Angry Zeta & The Hillbullys are from Buenos Aires and Live is the bands second release. The band play mostly Country-Punk (it use to be called Cow-Punk back in the day) versions of famous C’n’W and Cowboy songs like ‘Rawhide’, ‘Sam Hall’ and ‘Cocaine Blues’. The music is intense acoustic music with the spirit of the west throughout. Male and female shared vocals compete with some absolutely astounding banjo plucking and fiddle work as well as some double bass pounding. Their debut album is available as a ‘Name Your Own Price’ download on the Bandcamp link below if you want a taster of Live go check that out. The band have toured Europe before so keep an eye for them appearing at anytime. Here’s a stripped down version of ‘Glory’ taken from Live but as gloriously ramshackle as could be!!

It’s a really good recording that at times is very hard to tell its recorded live. I also couldn’t tell if there any originals on here but the ones that I know are covers are done in such an original way and with a passion and energy flowing through them they may as well be Angry Zeta & The Hillbullys own songs anyway!

Here also seems a good place to mention a couple of other important things. One is this amazing compilation album ‘Latino American Folk Punk’ of sixteen South American bands that came out last year. Featuring bands from Argentina, Brasil, México, Colombia and Chile it includes (in fact most of them are!) several Celtic-Punk bands whose name has spread beyond the continent like Lugh, Punching Namard and McMiners from Brazil, Aires Bastardos, Gypsy Vanner and Raise My Kilt from Argentina and the amazing La Fiesta del Diablo from Chile. The other bands I don’t know but overall this is a fantastic album and I can’t believe it passed me by. Maybe someone with a bit more knowledge would like to write a feature on it and the bands? If you are interested in a hard copy of the album you should contact Essential Distro on their Facebook or Instagram pages.

Another interesting development in the Argentinian scene is the Spotify playlist of the three most popular bands in the scene Aires Bastardos, Gypsy Vanner and Raise Your Kilt. All great bands who deserve a bit of recognition beyond their own shore. Hopefully this playlist will introduce them to a whole new range of fans so do them a favour and share wherever you can.

Put together by Pablo Gadea of Raise Your Kilt the Playlist contains twenty-eight songs and gives a wide range of all three bands and the songs they perform. You can go check it out on Spotify here.

So ends our 2019 Round-Up’s and again apologies to all the bands as each and every release deserved that full London Celtic Punks treatment. We have probably still missed some fantastic music so all the more reason to send us your releases to review. We are also always looking for people to join the reviews team so don’t be shy if you fancy giving it a go. And finally if you don’t want to miss any of our posts then you can follow us by simply filling in your e-mail address in the box that is either below or to the left depending how you are viewing and you will receive every post to your in-box.