THE BEST SONG EVER WRITTEN!

Film Review, Folk, Ireland, Traditional February 12, 2020 Comments: 2
The debate over what is the best song ever written will linger on and on and on and be debated well into the night by friends and foe alike. Here at London Celtic Punks we are unanimous in our view that it is a song that had been largely forgotten and unknown outside Ireland till the it’s first appearance on You Tube led to its well deserved modern day fame.

Back in 1976 while I was still listening to The Wombles (and a couple of years before I would discover Sham 69) the legendary Paul Brady released an album with the equally legendary Andy Irvine called Andy Irvine & Paul Brady. The whole album is simply outstanding, but there is one song that stands head and shoulder above even the best of the other tracks. Paul plays solo a song that closes the vinyl’s first side (remember ‘records’ and ‘sides’?) that I am yet to hear anyone who has heard it for the first time not comment on its utter brilliance. I am told it’s played in an Open G tuning and for me, someone with no musical talent, it is mesmerising watching Paul’s fingers “bounce on the surface of the strings like dragonflies on the surface of a pond” – guitar tabs for you budding musicians here. Paul’s voice is perfect for the song and the incredible lyrics that contain some serious threats of violence that are eventually acted upon! A Christmas song that is not your typical song! The song was also recorded by Bob Dylan on his Good As I Been To You album of 1992 opening up the opportunity for Pauls superior version to be heard all over again. Dylan had wanted to get out of a contract, but owed two albums so he recorded traditional songs that he liked.

Oh, me and my cousin, one Arthur McBride,
As we went a-walkin’ down by the seaside,
Mark now what followed and what did betide,
For it bein’ on Christmas mornin’
Now, for recreation, we went on a tramp,
And we met Sergeant Napper and Corporal Vamp
And a little wee drummer intending to camp,
For the day bein’ pleasant and charmin’.
*
“Good morning, good morning,” the Sergeant he cried.
“And the same to you, gentlemen,” we did reply,
Intending no harm but meant to pass by,
For it bein’ on Christmas mornin’
“But,” says he, “My fine fellows, if you will enlist,
Ten guineas in gold I’ll stick to your fist,
And a crown in the bargain for to kick up the dust,
And drink the king’s health in the morning.
*
“For a soldier, he leads a very fine life,
And he always is blessed with a charming young wife,
And he pays all his debts without sorrow or strife,
And he always lives pleasant and charmin’,
And a soldier, he always is decent and clean,
In the finest of clothing he’s constantly seen.
While other poor fellows go dirty and mean,
And sup on thin gruel in the morning.”
*
“But,” says Arthur, “I wouldn’t be proud of your clothes,
For you’ve only the lend of them, as I suppose,
But you dare not change them one night, for you know
If you do, you’ll be flogged in the morning,
And although that we’re single and free,
We take great delight in our own company,
We have no desire strange places to see,
Although that your offers are charming.
*
“And we have no desire to take your advance,
All hazards and dangers we barter on chance,
For you’d have no scruples for to send us to France,
Where we would get shot without warning,”
“Oh no,” says the Sergeant. “I’ll have no such chat,
And neither will I take it from snappy young brats,
For if you insult me with one other word,
I’ll cut off your heads in the morning.”
*
And Arthur and I, we soon drew our hogs,
And we scarce gave them time to draw their own blades
When a trusty shillelagh came over their head
And bid them take that as fair warning.
And their old rusty rapiers that hung by their sides,
We flung them as far as we could in the tide,
“Now take them up, devils!” cried Arthur McBride,
“And temper their edge in the mornin’!”
*
And the little wee drummer, we flattened his bow,
And we made a football of his rowdy-dow-dow,
Threw it in the tide for to rock and to roll,
And bade it a tedious returning,
And we havin’ no money, paid them off in cracks.
We paid no respect to their two bloody backs,
And we lathered them there like a pair of wet sacks,
And left them for dead in the morning.
*
And so, to conclude and to finish disputes,
We obligingly asked if they wanted recruits,
For we were the lads who would give them hard clouts
And bid them look sharp in the mornin’.
*
Oh, me and my cousin, one Arthur McBride,
As we went a-walkin’ down by the seaside,
Mark now what followed and what did betide,
For it bein’ on Christmas mornin’

The songs first appearance in print was around 1840 in Limerick as collected by Patrick Weston Joyce, but the roots of ‘Arthur McBride’, however, go right back further to the 17th century, and Ireland’s involvement in the Glorious Revolution (1688), the Nine Years War(1688-97), and especially the Williamite War in Ireland (1689-1691). The song refers to being “sent to France,” which would suggest the Flight of the Wild Geese: when the departure of the Patrick Sarsfield’s Irish Jacobite army were exiled from Ireland to France in 1691. 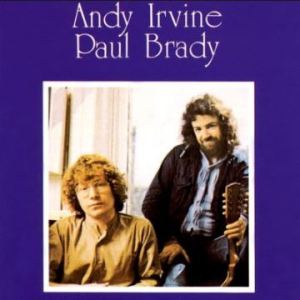 In the song, the singer and his cousin, Arthur McBride, were out walking when approached by recruiters for the British Army. They try to recruit them into service for the Crown extolling of all they will have both monetary and also the ‘finest of clothing’. Arthur McBride is having none of it and informs the recruiting sergeant that they would not be his clothes only loaned to him and why would they want to join up anyway only to die in France. The sergeant is angry at this and threatens both Arthur and his cousin but they defend themselves by attacking the recruiters with their shillelaghs (a walking stick made from blackthorn that was often used for ‘defending’ oneself!). The lyrics are so descriptive and even chilling- “And we lathered them there like a pair of wet sacks, and left them for dead in the morning.” They then steal their money and in a last show of defiance chuck the recruiters drum into the sea. The website Irish Music Daily has the best explanation for some of the colourful language used in the song.

The whole album is incredible and here from the same record is ‘The Plains Of Kildare’ an old traditional Irish song that with emigration made its way across the broad Atlantic and in the 19th century wound up in the mountains of Appalachia  to become ‘Old Stewball Was A Racehorse’.

The song spawned a short film in 1977 based on the story-line of the song called Christmas Morning. It took me ages to find a copy but I eventually came across it on Paul’s own You Tube channel. It was filmed on Gormanstown beach, north of Dublin and Don Foley who plays the corporal went on to star in several episodes of Father Ted while Godfrey Quigley who played the sergeant led a much distinguished acting career. As Paul describes it himself “long gathering dust on a shelf” the short film, directed by Tiernan McBride, is a beautiful adaptation of the song and really tells an entertaining story.

2 thoughts on “THE BEST SONG EVER WRITTEN!”