ALBUM REVIEW: THE FEELGOOD McLOUDS- ‘Life On A Ferris Wheel’ (2020)

Imagine if The Dubliners were around now and in their early twenties… then they may sound just like German Celtic-Punkers The Feelgood McLouds do!!

It is very hard when reviewing to figure out how popular a band is. Sure it’s easy enough if you are seeing that band regularly but when it’s one from abroad you can only go on instinct. The Feelgood McLouds are a band that have never appeared on this site before which seems strange especially as we have all been fans of theirs since their debut self titled album in 2017. That debut album saw The Feelgood McLouds pushing the envelope with both bagpipes and a more Streetpunk/ Oi! sound, both highly unusual for German Celtic-Punk bands. The album though utterly brilliant seemed to bypass the usual media and was completely ignored by us for some inexplicable reason as I can confirm it was a pretty decent debut. 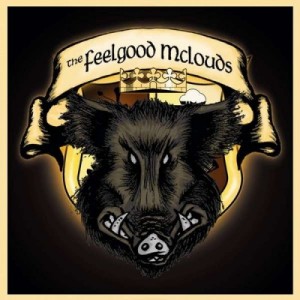 So here we are in May 2020 and I cannot possibly imagine a worse time to release a record with the opportunity to promote Life On A Ferris Wheel almost non-existent. With no sign of the ‘clampdown’ being relaxed it is a refreshing attitude to say “Hey, Life goes on” and say “Damn it!” and just put it out. The boys are a relatively new band, being formed in January 2015 in the city of Saarbrücken in the southwestern German state of Saarland. Now the Germans have taken to Celtic-Punk like no other country in Europe has and they have a wealth of really excellent bands but The Feelgood McLouds do more than enough to make themselves stand out. While most of these bands take a more Folk orientated route the McLouds are unashamedly Punk Rock and you could categorise the difference as being Do Or Die Dropkick Murphys and post- Mike McColgan Dropkick Murphys. That is not to say they are a straight up Punk band as they are most definitely not and they manage to combine that Streetpunk sound with Irish/Celtic melodies and instrumentation really well and authentically. The band themselves describe their sound as

which is fair enough but I also feel detracts from their ‘Celticness’ a little.

Life On A Ferris Wheel came out a couple of days ago on Wolverine Records,  one of the best known Punk labels in Germany and one that has seen its fair share of Celtic-Punk releases from bands like Bastards On Parade, Jamie Clarkes Perfect and The Mahones. Released on digipak and vinyl the album runs for an impressive near forty minutes and even more importantly, for us, its all original material with not a hint of a ‘Wild Rover’ or a meadow in Galway. The album kicks off with ‘Spineless Mass’ and if you heard that debut album you  may be expecting more of the Oi!/ Celtic crossover sound but here they have taken a Folky route but without losing any of their trademark speedy delivery and Punk rock attitude. Günther’s vocals are perfect for their sound and on ‘Foggy Days’ they come across as a sort of Flogging Molly/ Street Dogs hybrid with his vocals gruff and coarse and with the rest of the band joining in at intervals it makes the song a high point of the album. The first song released was ‘Moonshiners’ accompanied by a simple but effective and well made video of German bar life surrounded by adoring fans but guys what is it with the head on them beers?

Its a great song and pure Celtic-Punk and while I feel they have toned down their sound somewhat I also feel it is for the better and I’m a person that prefers Celtic-PUNK! Catchy and well played with a killer chorus and some great accordion from Benni. Their are flashes of the auld McLouds with ‘Mad O’Riley’ playing as mostly straight forward Punk but with a nice Irish interlude at several points through the song. In common with a lot of Euro bands they inject a spot of Ska into proceedings and ‘Lovers And Friends’ takes an anti-racist stance without being preachy and po-faced and plays with great humour and cool lyrics. Again the accordion shines here. There is a lot going on in their songs and at times they are banjo led and other times accordion which must make it difficult live as Benni is the man behind both instruments. Halfway through with the country tinged ‘Off The Rails’ and its all first class but not heard a great deal of the much vaunted Bagpipes yet. ‘King For A Day’ is fast and furious at just over a couple of minutes and for the first time since the opening track the pipes get a proper good airing and its well worth it. ‘Last Hurray’ flies by in just over a minute and with the manic banjo plucking reminds me of Mick O’Toole. ‘Drink To All My Friends’ features Valerio guesting on vocals from Berlin based Ska-Punk band The Offenders and was the albums second single release. The Offenders are probably best known for last years single ‘Rose Thorn’ featuring the distinctive voice of the wee legend himself Frankie McLaughlin.

Take a minute or two to check out the fantastic accompanying video which goes to show that even in these testing times a bit of imagination can produce something really good and clever. A great song would be good and that is delivered too with another banjo heavy number. ‘Runaway’ has Eastern influences while Gunthers vocals verge on Death Metal but we are back in traditional Celtic-Punk territory for the final two tracks with the pacey ‘Behind Black Eyes’ and the sad swirling of ‘In Our Pub’.

Twelve tracks all written by the band themselves and not a single duff note among them. The McLouds are making a name for themselves and as is evident from the songs here their live show must be bloody manic. Singalong choruses, catchy rhythms, loads of different influences (which don’t detract from the Celtic feel of things), hard and fast Punk at times and a more trad Celtic at others its a extremely well paced album that, as someone else said in a review it is “never boring” and that is absolutely the truth. The Feelgood McLouds may not be a band on every bodies lips just yet but Life On A Ferris Wheel is hopefully set to change that but anyway the message the bands hope finds its way into your ears is “We drink to all our friends and we’ll never go home!” and to that I can can raise a glass also. Sláinte.

(The Feelgood McLouds live in concert May, 2019 in Cologne, Germany)