THE DAY THE FIGHTING IRISH TOOK ON THE KLU KLUX KLAN

The last few days have seen ‘cancel culture’ in full flow and with the cancelling of the Washington Redskins so it was only a matter of time before they came for The Fighting Irish too. It’s a fascinating story how a mid western college, with a French name, The University of Notre Dame du Lac, to give it it’s full title, became known as ‘The Fighting Irish’, and one of the biggest Irish sporting institutions outside of Ireland. The nickname dates back to a day in 1924 when Notre Dame students violently clashed with the Ku Klux Klan. A weekend of riots gave the Klan a bloody nose and brought to an end their rise to power in Indiana at a time when even the state’s governor was among its members.

These days the Ku Klux Klan are a joke. A small tiny insignificant group living on past glories of the days when they held the key to power in states throughout America and terrorised local populations through murder, lynching, arson, rape and bombings and of dreams of 1925 when they had upwards of 6,000,000 members. Nowadays membership is numbered in the 100’s but back in the 1920’s the organisation was extremely influential and in some places, such as Indiana, it operated as a political party, dominating both local government and police forces.

So on May 17, 1924 when a group of 500 university students banded together to disrupt a KKK rally planned for South Bend, The Fighting Irish left the racist organisation with more than just black eyes and bloody noses: its reputation had been left in tatters and it would never recover from the beating it received that day from The Fighting Irish. That these students were Catholic, from the University of Notre Dame, added insult to injury. With no black population to attack, the Indiana branch of the KKK aimed its hatred towards ‘Papists’. At this time, stereotypes and ethnic slurs were openly expressed against immigrants, Catholics and the Irish. Notre Dame was largely populated by the children of ethnic Catholic immigrants, many of them Irish and the press often referred to Notre Dame sporting teams as ‘The Catholics’ , or worse, ‘The Papists’ or ‘The Dirty Irish’.

According to Tod Tucker, author of Notre Dame Vs. The Klan, a book on the South Bend riots that took place exactly 95 years ago, this was a rare instance of civilians standing up to the Ku Klux Klan.

“Especially in terms of resistance in kind. People faced off against the Klan, for sure, the military and the police did, but as far as I could find this was really a unique occurrence in American history. It was really a perfect storm in a lot of ways.”

The rally was organised for a Saturday morning, with Klansmen coming in from several points of the State. The students’ response was more spontaneous.

“It seemed to happen organically, it wasn’t planned. The students started disrupting the Klan’s activities, the parade, all they had going on. It was all kind of low-level violence and disruption”.

Klan members were used to breezing into towns and taking them over without any opposition so when they were confronted by hordes of angry young men proud of their Catholicism they were to have no idea of the violence that would be unleashed upon them that day. Klansmen were led into alleys where they were beaten black and blue and had their KKK uniforms stolen. Students from the school’s legendary football team formed wedges and ploughed into groups of Klan members like they were challenging for the state title. The remaining Klu Klux Klan members were chased to their local HQ, where students began pelting a large “flaming cross” of red light-bulbs with potatoes from a nearby grocery store.

A couple of days later, the students rallied again to go in aid of a colleague who had supposedly been caught by Klansmen and was being beaten. They rushed into an ambush laid by the KKK with the help of the local police.

“This time the Klan was waiting for them, and it was a much more violent affair, with broken bones, swinging clubs, gunshots fired. Nobody was killed, but there was potential for real violence.”

Only the personal intervention of the University president, Father Walsh, kept the students from seeking their revenge. Broken bones aside, though, it was the KKK that suffered most lasting damage. A second parade was planned but never materialised. Its reputation irreparably damaged, the Klan never managed to control South Bend. Among students, it was the initial success that became school legend. Tucker explains at the time, however, the board were unimpressed by their students’ victory.

“They were horrified! The Irish Catholic organisations in America, especially, were constantly fighting this notion that the Irish were an uncivilised violent mob, so to have the students of Notre Dame involved in a riot was the worst possible scenario.”

There was a dressing down of those involved but no students were disciplined. A native of Indiana himself, Todd Tucker explains that the incident would come to symbolise a more lasting issue.

“It is emblematic of a painful divide between Notre Dame and the locals, the people of the area, which both parties have worked hard to try and fix. So it’s not something the university brags about, because it represents something that has been an ongoing problem in the university’s history.”

Only three years later Father Walsh would give permission for the unofficial nickname of the university American Football Team to become the name they would become famous worldwide for- The Fighting Irish.

(with thanks to The Irish Echo, Filipe D’Avillez of The Catholic Herald and Todd Tucker) 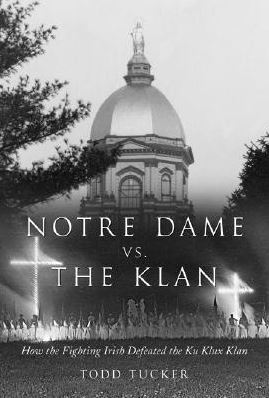 Notre Dame vs. The Klan. How the Fighting Irish Defied the KKK

In 1924, two uniquely American institutions clashed in northern Indiana: the University of Notre Dame and the Ku Klux Klan. Todd Tucker’s book, published for the first time in paperback, Notre Dame vs. The Klan tells the shocking story of the three-day confrontation in the streets of South Bend, Indiana, that would change both institutions forever.

When the Ku Klux Klan announced plans to stage a parade and rally in South Bend, hoping to target college campuses for recruitment starting with Notre Dame, a large group of students defied their leaders’ pleas to ignore the Klan and remain on campus. Tucker dramatically recounts the events as only a proficient storyteller can. Readers will find themselves drawn into the fray of these tumultuous times.

Tucker structures this compelling tale around three individuals: D.C. Stephenson, the leader of the KKK in Indiana, the state with the largest Klan membership in America; Fr. Matthew Walsh, the young and charismatic president of the University of Notre Dame; and a composite of a Notre Dame student at the time, represented by Bill Foohey, who was an actual participant in the clash.

This book will appeal not only to Notre Dame fans, but to those interested in South Bend and Indiana history and the history of the Klu Klux Klan, including modern-day Klan violence.