LET THE MUSIC KEEP YOUR SPIRITS HIGH – PART ONE 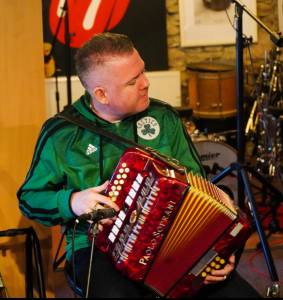 Andy Nolan is best known on these pages as the accordion player and songwriter for the London Irish musical tour-de-force The Bible Code Sundays and as an ex-member of Shane MacGowan And The Popes and Spider Stacy’s Vendettas but there’s a lot more to him than just being an expert accordionist. Andy is also a talented screenwriter, producer and author. Born in Hammersmith, West London at a time when the Irish influence on London was at its greatest his songs speak not only of home in London and Ireland but stretch across the worldwide Irish diaspora with an special a focus on the United States. Among his many achievements he wrote and produced the short film Tax City, and the London Irish crime drama, Jack Mulligan, which premiered on London Live. Here over the last few weeks on his Facebook page he posted a brief description of a few of the standout songs he has written and the history behind the words. Well we thought it was too good not to share with you lot so with Andy’s kind permission here over the next couple of Sundays is Part 1 with Part 2 to follow next week.

THE SWAMP RATS OF LOUISIANA

A tribute to the 30,000 Irishmen who died in New Orleans digging out the New Basin Canal – a navigational waterway linking Lake Pontchartrain with the Mighty Mississippi. Over a four year period 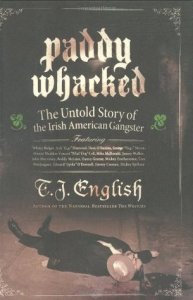 from 1832, thousands of Irishmen jumped into the swamps & dug in a straight line towards the lake. Many of them had been tricked by cotton brokers back in Liverpool that they were being transported to Philadelphia, Boston or New York which by now were already overflowing with poor Irish immigrants. Yellow fever and unforgiving heat ravaged workers in the swamps of Louisiana therefore the loss of black slaves doing such work was judged too expensive. As a result most of the work was carried out by Irish laborers who could easily be replaced at no cost with more and more now arriving by the boatload on a daily basis. Many were buried without a grave marker in the levee and roadway-fill beside the canal itself.

Abject poverty gave birth to New Orleans first criminal gangs such as the Corkonians, the United Irishmen and The Live Oaks. Sheehan, our hero in this song, becomes so demoralised at the hell-hole he now finds himself in that he throws down his work shovel for good and instead rises up through the ranks of the powerful Live Oaks Gang. I strongly recommend the book ‘Paddy Whacked’ by TJ English who covers this period in American history in greater depth!
A big thank you to Stephen Gara for his fantastic uilleann pipe playing on this track!

SEE YOU AT THE CROSSROADS

I wrote this song about my dear pal Noel Stephen Smith after reading his autobiography ‘A Few Kind Words And A Loaded Gun’ for the very first time many years ago. The title of the song was inspired by the opening pages where Noel dedicates the book to his son Joseph Stephen Smith RIP – ‘See you at the crossroads, kid’. Noel ‘Razor’ Smith was part of the notorious Laughing Bank Robbers gang from South London racking up 58 criminal convictions and spending the greater portion of his adult life behind bars. The dangerous outfit committed over 200 bank robberies but while serving a life sentence in prison Noel decided to turn his back on the life of crime teaching himself to read and write, gaining an Honours Diploma from the London School of Journalism and an A-level in law. Since then, Noel has been awarded a number of Koestler awards for his writing and has contributed articles to the Independent, the Guardian, Punch, the Big Issue, the New Statesman and the New Law Journal. 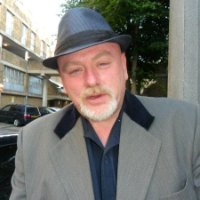 The melody instrumental throughout the song is taken from ‘My Lagan Love’ – an old traditional Irish song and I wanted the finished version to have that ‘She Sells Sanctuary’ vibe by The Cult – full of swagger and attitude!

“Racing through London in the pouring rain
I feel the rush go through my brain
Finger on the trigger, mask in my hand
Nothing can touch us, Butch & Sundance”

Noel has been a great friend & inspiration to me down through the years. We cast him in two of my short films Tax City & Jack Mulligan & he is now my literary agent for my own forthcoming true crime book Green Bloods. Keep marching on comrade & thank you for everything! Love ya mate!

Our love for Celtic FC  is something we’re very proud of & the reason why I wrote this song. Formed in the east end of Glasgow in 1887 by poor Irish immigrants escaping genocide and famine back in Ireland, Celtic FC became a beacon of hope for those starving and penniless who made the short but urgent crossing over to Scotland. Andrew Kerins, also known as Brother Walfrid, was a Marist Brother 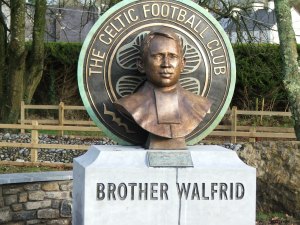 from Ballymote, County Sligo who witnessed at first hand the plight of his own people in a very hostile and anti-Irish city of Glasgow. All soup kitchens in the city at the time were established by the Church of Scotland and in order to receive a meal there, the newly arrived, hungry Irish Catholics were ordered to denounce their own faith and convert to Protestantism before receiving it. Brother Walfrid, along with a group of fellow Irishmen including John McLaughlin, John Glass, John O’Hara and Willie Maley (and with the help of Hibernian FC who had already similarly been established in Edinburgh by Irish immigrants) immediately stepped in and formed a charitable football club in St. Mary’s Church in the Calton to stop this cruel exploitation of Irish refugees –

The rest as they say is history!
We’ve been very fortunate and honoured to have been invited to play on the sacred pitch at Celtic Park on several occasions, including some unforgettable Champions League nights when we beat Barcelona 2-1 & also outside the Nou Camp itself! For me personally, supporting Celtic has taught me some invaluable lessons in life in regards to treating others with respect & offering both solidarity & charitable support to those who are still fighting their own injustices today – unity is strength

THE KIDS FROM THE CITY OF NOWHERE

Some of the stories here aren’t for the faint hearted, but they’re all true! I wrote this as a tribute to our London Irish community. For so long we were overlooked and dismissed like we didn’t exist but the truth was we were London’s oldest and biggest immigrant community who contributed so much in terms of rebuilding the UK’s decimated infrastructure after WW2. Musically too – John Lydon, Boy George, Kate Bush and Shane MacGowan are all born or raised in London of Irish parents, to name but a few. Chas Smash’s nutty dancing in Madness was heavily influenced by his own parents who were Irish dancing champions. I remember Chas and his ol fella used to come into our gigs in the Good Mixer in Camden Town many moons ago and they’d both be suppin Guinness and Irish dancing at the bar while we played. I reference the late, great Patsy Farrell too who was a singer in the James Connolly Folk Group. He was from Longford, as were my parents and Gavin Hayes dad Shay sang in the same group. They used to play all around Hammersmith (where I was born) when we were kids and on one occasion in The Salutation pub someone took exception to Patsy belting out the rebel songs and lobbed a penny at him. Patsy dived straight down off the stage on top of the culprit and made very short work of him – ‘down jumps Farrell on top of Thatcher’s man.’ The reference to the ‘high rise on the streets of Acton’ is when a group of my dads mates masked up and armed with hurley sticks dished out some sweet revenge on some bullies that were treating their wives and children like shit. They started on the bottom floor of the high rise flats and worked their way to the top until every culprit had been taken care of. Their families were never bothered again!
I remember us rehearsing this song for the first time in the back hall of the Adam And Eve pub in Hayes (thanks Anlon O’Brien). It wasn’t clicking and I was trying to explain to our dearly departed Carlton the drum feel I wanted but it wasn’t quite right. I jumped in my car, raced home and grabbed the B-side single of ‘Round Are Way’ by Oasis and drove back to the pub. I stuck it on the CD player & Carlton understood and got the rhythm straight away! Round Are Way is a big influence on this song. We even got Tony Rico Richardson and the brass boys in to record on the album version! 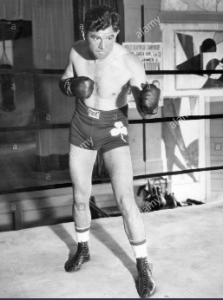 Heavyweight Champion of the World back in 1935. The man he beat, Max Baer and nicknamed ‘The Killer’, had already killed Frankie Campbell in the ring while the mauling he dished out to Ernie Schaaf would contribute to his death five months later. Braddock was born in the Irish slum of Hells Kitchen, NYC until his family moved to Bergen, New Jersey. He came from a long line of fiercely tough Irish American boxers who at one stage ruled supreme in the early days of the noble art – John L Sullivan, Gene Tunney, Billy Conn, ‘Philadelphia’ Jack O’Brien, ‘Gentleman’ Jim Corbett, Tommy Loughran, ‘Terrible’ Terry McGovern and Jack Dempsey to name but a few. Forever the people’s champion but a huge underdog nonetheless, Braddock spectacularly beat Baer in a bruising 15 round battle to become the Heavyweight Champion of the World. He held onto the crown until he was beaten by a young Joe Louis in 1937.

The Hollywood movie The Cinderella Man (featured in the video above) starring Russell Crowe is based on Braddock’s life story. Russell famously tweeted this video (made by Padraig Clarke, a fan of our band) to his 3 million fans on Twitter which brought our band to a whole new audience! He would later sing on our most recent album Walk Like Kings! Thank you Mr Crowe!

Facebook  YouTube1  YouTube2  Spotify  Instagram  Twitter
The Bible Code Sundays have been regulars on the London Irish circuit for over a decade and continue to pack them in across London. You can catch the band or some variation of them on most days of the week somewhere in the capital. The best place to find out their gig dates is on their Facebook page. Their records are still available on Spotify above or Amazon and iTunes or at their gigs. Most recently they starred on the compilation album Quintessential Quarantunes featuring six bands, three from Ireland and three based in London and recorded during the lockdown.