Dundee is a truly unique place in Scotland becoming known as YES City after 57% voted in favour of Scottish independence in 2014’s referendum – the highest proportion of Yes votes in Scotland.

Like their hometown The Cundeez are also unique. Unashamedly Dundonian Working-Class with a fast and heavy sound, straight out of the Punk-Rock tradition, but with pipes and kilts! 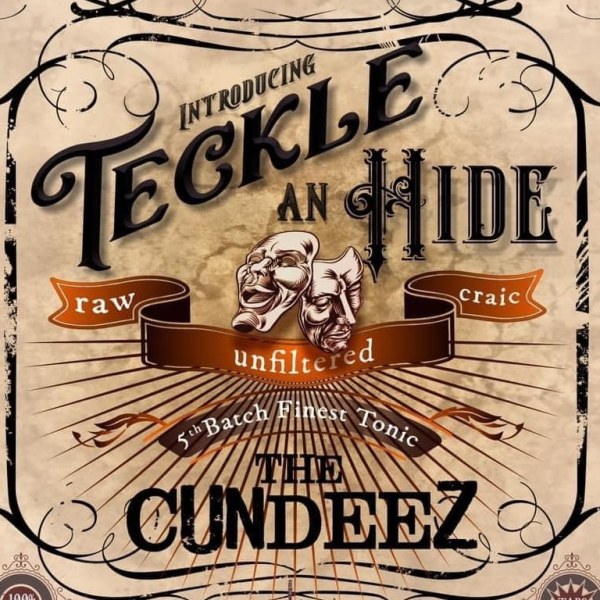 The Cundeez are back with their fifth album of Highland bagpipes driven Punk Rock hot off the presses. One of the London Celtic Punk favourite bands they safely saw off their 10th anniversary recently and never ones to rest on their laurels five minutes after finishing Teckle An Hide they began work on their next album! 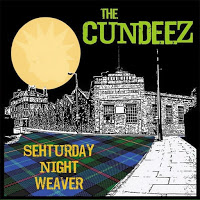 Teckle An Hide kicks off with the simply titled instrumental ‘Dundee’. The first of a trio of home town dedicated songs dotted through the album. Now every town needs an anthem, one to play as the local football team comes out and with two teams, Dundee and Dundee United, I hope one or both take the opportunity as the song is a belter. Building up slowly (for them anyway!) before Gary’s brilliant piping comes in and you can tell why for years opposition forces on the field of war recoiled in fear as the sound of pipes filled the air. This takes us into ‘Peat & Diesel’ a song dedicated to their friends in Peat & Diesel, a three-piece band from Stornoway on the Isle of Lewis in the Highlands of Scotland. They are a young band that have been steadily on the rise over the last couple of years so great to see this solidarity between an experienced band like The Cundeez and a band just setting out. The song itself shows The Cundeez wicked sense of humour as new drummer Shaun Kerr stamps his arrival in the band with fierce tribal drumming while long time members Stevie and Trotsky on guitar and bass supply the perfect backing. At nearly six minutes it’s the albums longest track and sways from Gothic in places to hardcore Punk and back to melodic rock while the pipes are again in evidence.

Never afraid in throw in a bit of Ska and with ‘Teckle’ an obvious comparison here is with early Rumjacks when they were based in Oz. Now we are three songs in and my Dad was Scots but a lot of this is passing even me by! The Dundee accent has a very particular sound and is integral to the band’s identity. The band take their name from the Scots word ‘cundie’, meaning a drain, which comes originally from the French word conduit. Having said that piper and songwriter Gary’s vocals are very clear despite being delivered in trademark Punk Rock shouty sneer. ‘Scooby Dubh’ tells of a serious pub crawl delivered in speedy breakneck form. They follow this with the first of the albums three cover versions and ‘LWTUA’ is a fancy unexpected instrumental Ska version of Joy Division’s ‘Love Will Tear Us Apart’ with skanking guitars and piping. Who would have thunk it possible and it may have hardcore JD fans writing to their MP’s but I bloody love it! The Cundeez have always enjoyed themselves and their sense of humour is legendary but they also have a serious side and in ‘Bow To No One’ they take the well trodden Punk path of anti-religion.

They continue the combativeness with ‘Them And Us’ as the band unleash on the divides in society that leave the working classes at the bottom while pumping out a 1981 style UK Punk classic. Another cover next and after two Punk thrashers it’s time for Gary to get out the pipes for ‘Horo’, a cover of ‘Horo Gheallaidh’ by the aforementioned Peat & Diesel. Now this is another highpoint with the catchiest track on the album. Fast, thrashy guitars telling the tale of a night out in the Highlands. Brilliant!

Another hometown anthem next with ‘Made In Dundee’ but perhaps not one for the Tangerines to run out to. A warts an’ all expose of Dundee in all it’s misery and glory wrapped in a dark plodding ‘dub’ number. Next up is ‘Rebellion’. Originally released as a 7″ vinyl single on Urinal Records in early 2016 and at the time The Cundeez were on a bit of a high performing at Punk festivals in England and even travelling all the way down from Dundee to London town for a couple of gigs in north and south London. The single was limited to only 300 copies and sold out in no time so its fair to say it probably passed most fans by seeing as it was just before the return of vinyl as a popular format.

The album continues with ‘Up For The Craic’ a jolly Punk Rock ride that again shows the bands lighter side before they again tackle something a bit darker in ‘I Am Gangster’ about the desperate life of a poor soul destined for jail. Appearing on the album listings as ‘Buzzcocks’ the lads next tear into ‘Ever Fallen In Love’ and it’s another corker of a cover with the pipes lifting it out of this world. We’re steering towards the end and if I was to have one wee quibble it would be that the album is a tad on the long side with sixteen songs with a running time of almost a hour. You certainly get yer hard earned worths but I wonder if the album could have been trimmed a little with the album closing with two reworked versions of ‘Sehturday Night’ from 2011’s ‘Lend Wiz Yir Lugz’ and ‘Gangs O’Dundee’ from 2010’s album Radio Cundee taking us into the anarcho styled curtain closer ‘Austerity’.

Released on the American Punk label Tarbeach Records and recorded at Seagate Studios in their hometown the album is an outstanding success, especially considering that a lot of it was done under the restrictions placed upon the band because of the Covid ‘clampdown’. Make no mistake it may have been very tempting for us to rope The Cundeez in with other bagpipe heavy Celtic-Punk bands but they are no Real McKenzies and, more importantly, have never tried to be. The Cundeez are a Punk band with Celtic roots but even then there is much more to them as they are never afraid to stray off into other genres. Teckle An Hide is possibly their most accessible album to date. It still has their trademark fast, punchy, catchy Punk-Rock and the same shouty vocals delivered in that raw Dundee dialect but their Celtic and Ska influences see them moving into new territory without ever watering down their music or their identity.

(The Cundeez playing a socially distanced Facebook Live Stream from the end of last September. As Gary said afterwards “a crazy surreal experience doing a ‘gig’ all split from band members but thankfully we got there. It was rough and raw and absolutely nerve-wracking.”)