2020 was by and large a shitty year for music. Sure their were a few bright spots… off the top of my head the many Live Streams but it was never going to replace live gigs for the Celtic-Punk scene where live gigs are everything. Even in a year with much fewer releases we still couldn’t keep up with everything! At London Celtic Punks we pride ourselves on giving detailed and extensive reviews but sometimes this isn’t quite possible so here’s the ‘Round-Up’s’ of some of the records we missed first time round.

Just a couple of weeks ago we reviewed the 30th anniversary album of German band Fiddlers Green and around the same time was released another album by a Celtic-Punk giant on the other side of the planet celebrating thirty years in the game this time from The Mahones. Yes 30 years. THIRTY. Hard to believe isn’t it? Popular throughout the world they have recorded eleven studio albums, two live albums, an acoustic album and a compilation marking their 25 year anniversary and have covered more miles than British Airways! Here they have carefully chosen nineteen tracks of their best from across the 30 years of their career. The album is available as a ten track vinyl release (on green!) and also on CD and download with nine bonus tracks from True North Records. As for the songs they are everything you would expect. We may have heard them all before but their really is something for everyone here as The Mahones flit from raucous Irish Punk rockers to maudlin and sad ballads. The mix of songs is perfect and the balance between the harder songs and the ballads is as well. For a band that tours as much as The Mahones do 2020 must have been a particularly difficult year for The Mahones but already with dates released for 2021 they are well prepared to take their 31st year by the throat when it arrives.

RUNA – ‘The Tide of Winter’

American Irish ‘supergroup’ Runa are one of the best Irish Folk/Trad bands around. This is due in no small part to the beautiful voice of lead singer Shannon Lambert-Ryan (who also plays quite a mean harp!) and that they also have the ability to weave other influences into their signature sound without you even noticing. Several LP’s in Runa have become famous on both sides of the Atlantic now and continue their path with The Tide Of Winter. Now by rights this ought to have been done pre-Christmas but it slipped the net and we ran out of time. A beautiful, at times haunting and at others spirit lifting, collection of thirteen Christmas themed songs and carols. All the favourites are here (‘In The Bleak Midwinter’, ‘God Rest Ye Merry Gentlemen’, ‘Silent Night’) as well as a few new ones including a stunning version of ‘The Wexford Carol’ (also known as ‘Enniscorthy Carol’) recorded in its native Irish Gaelic.

It was in May 2019 that Runa got together for a weekend to get into the Christmas spirit and started working on arrangements for the album. Highlights beyond those already mentioned include the track ‘Instrumental’ which features the songs ‘Hark the Herald / Dixie Hoedown / Red Prairie Dawn / O Come Emmanuel / Road to Cashel’ seamlessly joined together with some amazing musical work from Fionán, Chery, Caleb and Jake. One for next Christmas I suppose but hopefully by then Runa’s joyous album really will be something to celebrate.

ALESTORM – ‘Curse Of the Crystal Coconut’ 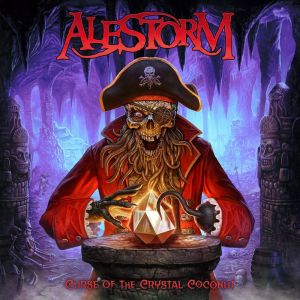 From traditional Christmas folk music now to Heavy Metal! Founded in 2004 in Perth, Scotland by Christopher Bowes Alestorm are one of the pioneers and certainly the leading light of Pirate Metal! Basically the combination of Heavy Rock/Metal and Pirate music. Now Pirate music is often confused with Celtic music and for good reason too. The similarities are obvious to anyone with a pair of ears with plenty of the same melodies (and even some of the same songs) criss-crossing the genres. Alestorm have been together for fourteen years and they may have toned down the Metal side of their music a little but their popularity seems set to continue with this their sixth album. Now I don’t claim to know much about this genre but it does seem to be growing and their have been a few high profile gigs in London over the last couple of the years with Alestorm headlining some of the towns biggest venues. Released in May on Napalm Records and recorded in Thailand this is as good a place as any to start if this genre interests you. Songs like ‘Treasure Chest Party Quest’, ‘Fannybaws’ and ‘Pirate’s Scorn’ give you an idea but it is the epic eight minute ‘Wooden Leg Pt. 2 (The Woodening)’ that really stood out for me showing there’s more to Alstorm than gimmick.

MAGGIE’S FLOCK – Party At The Cemetery 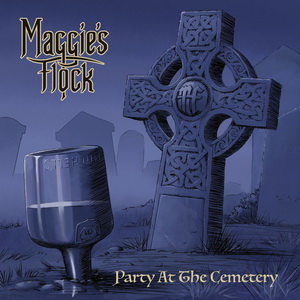 The debut release from Dutch Celtic-Folk-Rockers Maggie’s Flock. The six-piece band from Nijmegen / Arnhem that play a style of music that veers from Celtic-Rock to traditional Folk with more than a little Celtic twist. The band had the novel idea to release a video/song a month on You Tube from January 2020 through to December and then compile the songs into an album and release it. We have tracked these videos over the last year and it really is worth checking them (the Party At The Cemetery YouTube play-list) out yourselves as the work the band put into them deserves it. So quite a novel idea in quite the ‘novel’ year! The Netherlands has quite the cool Celtic scene and one of our gigs last year that Covid killed off was a Dutch Celtic-Punk double-header with Pyrolysis and The Royal Spuds. Musically Maggies Flock come across to me as a ‘mature’ Dropkick Murphys. I mean the Dropkicks sound of recent rather than their punky years. Catchy, tuneful songs with chugging guitars and superb whistles and accordion. ‘The album opener ‘The Poguey Club’ is one of the many highlights here and you can tell this album has not been rushed into. The idea of releasing a song a month has worked perfectly here as the balance of songs is great and the music is not solely Celtic veering into more Folk-Rock/Punk at times. Personally I love me Tipp songs so I especially loved ‘Travelling Laddie’ but the fast ‘Bored Beyond Death’ is sure to get the toes tapping.

A lot of effort then and not just in the music with the vinyl version coming in a luxurious fold-out cover with all the lyrics while the CD has an extensive 24 page illustrated booklet.

Drawing in inspiration from sea-shanties, traditional music, Celtic-Rock and Celtic-Punk, Irish-Punk and Folk-Metal, Barbar’O’Rhum inhabit an area that sits somewhere between Alestorm and The Mahones. Founded in 2014 in the South-West Of France the band offer up their own style of music they call ‘Rock ‘n’ Rhum’. The musical style here owes much to theatrics making them more a band you would want to witness live but they have captured the sound of the band here rather well and also the atmosphere too which I would think is a lot harder. From beginning to end it’s an accessibly joyful Punk Rock stomp from album opener ‘Pirate des Champs’ which brings in some offbeat but delightful influences to eight minute epic ‘Freres de Bitte’ which brings down the curtain on the album and manages to capture all the various parts of Barbar’O’Rhum in one bombastic theatrical campy triumph. Yet in a album that lasts over an hour and the majority of the songs are around the five minute mark it’s that opening track that stand outs head and shoulders and one listen to that will tell you all you need to know about whether you would like this album or not. Me I fecking loved it!

So their you go our ‘last’ post of 2020. Apologies to all the bands that we weren’t able to give each album the full London Celtic Punks treatment but was just not possible this time. Remember if you are in a band then we cant do a review if we haven’t heard your release!

If you don’t want to miss any of our posts in future then you can follow us by simply filling in your e-mail address in the box that is either below or to the left depending on how you are viewing and you will receive every post to your in-box.