The New Ruffians are the type of English band that usually comes from the rolling hills of Devon or Somerset. Alcohol loving folkies playing spirited covers at 110mph and totally enjoying themselves! Instead they come from the West Midlands town of Wolverhampton home of Wolves FC, the mighty Slade and the even mightier Kevin Rowland of Dexys Midnight Runners. The New Ruffians were formed in 2015 by four multi-instrumentalist ‘Wulfrunians’, as natives are called, and have been playing a chaotic mix of traditional Irish, Celtic-Punk, vintage Ska and leftfield folk to inebriated locals since.

These are not yer typical Celtic-Punk band by any stretch of the imagination and I don’t just mean because they include a trombone player! A seasoned live band and popular on the local pub scene they recorded their first album ‘Shenanigans’ in early 2020 but thanks to you-know-what (!) wasn’t released till the end of November. Still it snuck into the London Celtic Punks Best Album list at #28. 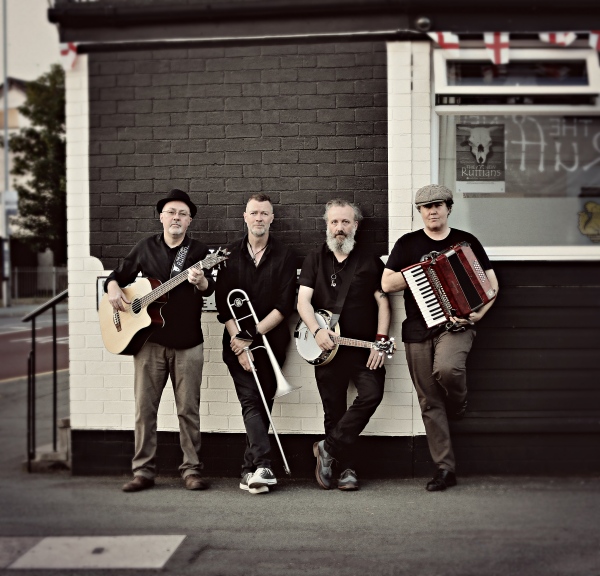 Shenanigans is the bands debut release and features seventeen songs with the emphasis on covers and most of those Irish songs. Its a good selection but as usual we would have liked to have heard a few more originals but with the album lasting a 3/4’s of an hour there’s no denying you get great value for money but what about the music?

The album kicks off with ‘Wake Up’ and true to form it’s a song about being at a music festival (probably in Devon or Somerset!) and trying to get up despite a sore head. The music is acoustic guitar, accordion and thumping heavy bass line and that trombone! To say the mix is unusual is a understatement but somehow it works but it always helps to have a strong vocalist and Daran is that. Loud, perhaps a tad too loud in the mix, but if you’re looking for an album that will transport you mentally to the boozer then this is it and there is nothing wrong with that! This is followed by a bunch of covers, ‘Waxies Dargle’, the instrumental ‘Lark In The Morning’ and the lively ‘Courtin’ In The Kitchen’. These three songs pretty much sum up the band. Full of energy and passion and emphasise their link to Irish music and especially the kind made popular by The Pogues/ Dubliners.

Another new one ‘Tipsy’, a classic take on that staple of Celtic-Punk the drinking song witha unusual Ska-ish accordion beat and even featuring the gibberish chorus of

‘Millionaires’ is a cover of Cornish buskers Phat Bollard and again is a lively song, easy to singalong to and next a bunch of Folk songs some better known than others, but all played with gusto. The Irish trad instrumentals ‘Father O’Flynn’ and Siege Of Ennis’ along with ‘Raggle Taggle Gypsy’ and the Scots tune ‘Come By The Hills’ before we are treated to a couple of originals. ‘The Parkdale Jig’ is short and sweet catchy instrumental while ‘Daddy Was’ my favourite song on the album is definitely the sort of song to get your feet moving despite its sparse arrangement. The spirit of Shane and Ronnie lives on in The New Ruffians final few songs with ‘Rare Old Mountain Dew’ leading into the original ‘Merry Hell’ with more tales of drinking and its effects. Matthew O’Reilly’s ‘To The Devil With Your License’ is the longest track here and the most elaborate. Another standout while the album closes with two Celtic-Punk staples ‘All For Me Grog’ and ‘I’ll Tell Me Ma’.

Not a bad effort at all by The New Ruffians. Their debut album and you get the sense they tried to cram as many of their songs onto it as possible! I think the last two were probably not needed and it would have been better to finish on the great ‘To The Devil With Your License’ but I guess they wanted to leave the album exactly how they came in. With upbeat humour and plenty of shenanigans. There is no other genre of music that fits the pub quite as much as Celtic music does and The New Ruffians are made for the pub and treating everyday as St. Patrick’s Day. This is as faithful a copy of a pub set as I think any band has managed and I bet they can’t wait to get their raucous drunken table dancing mayhem back to the pub!

(You can stream or download Shenanigans on the Bandcamp player below)

Tagged: The Dubliners, The New Ruffians, The Pogues