Immersed in a hotbed of Gaelic culture that smashed head on into a love of whiskey, poetry, footy, debauchery, ska and punk The Peelers may not be the most prolific band on the Celtic-Punk scene but  for 20 odd years they have certainly been one of its best! 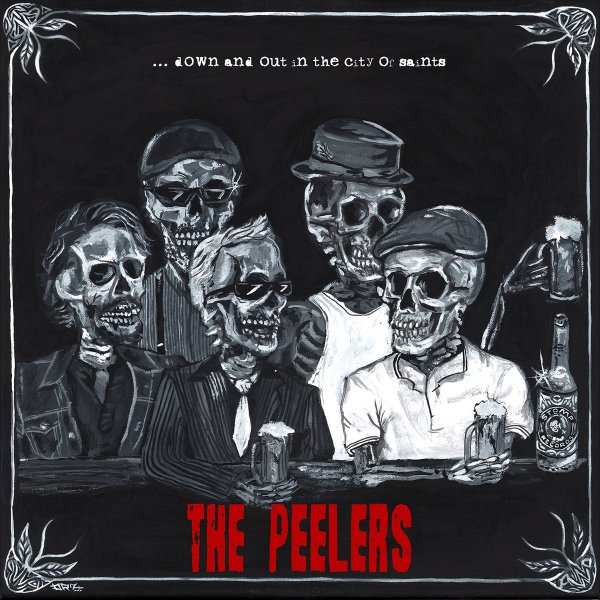 Sadly for The Peelers the release of their fantastic new album Down And Out In The City Of Saints was overshadowed by the release of the new Rumjacks album. Coming out around St. Patrick’s Day we are normally overwhelmed with releases but it’s understandably been more of a slow trickle so far during 2021!

One of North America’s more popular bands The Peelers are celebrating their 22nd anniversary this year after forming in 1999 in a small farmhouse kitchen in North Glengarry County in Eastern Ontario, Canada. Glengarry holds a special place in Canadian Irish history being separated from New York State by the St. Lawrence river it was originally settled by Irish immigrants who chose the name Glengarry in memory of home. It was where, during Án Gorta Mór, the coffin ships sailed to after being refused entry from America. It is thought over 15,000 Irish people are buried on the small island of Grosse Île where a huge Celtic cross now stands as a memorial to their poor souls. Nowadays though The Peelers are based in Montréal, the largest city in the French speaking province of Québec and The Peelers and their fame has long spread beyond Canada.

Their debut album Boots And Suits came out in 2002 followed by Liquordale in 2004 but it was an incredible 13 (thirteen!) years before they released another album with Palace Of The Fiend arriving on January 3rd, 2017. Recorded in five different studios, located in Montreal, Toronto and Morocco it was very well received across the Celtic-Punk world reaching #4 on the LCP Best Of 2017 list that year. So it is that a four year gap is not bad at all for The Peelers! The new album was again recorded in multiple places in Montreal, Dundee and Vancouver (sounds a bit like a version of Del Boy’s three wheeled van!) between December 2019 and June 2020. We can thank Covid for the gap this time with recording and production interrupted for several months while most of the world went into lockdown. The new material again reflects the North American experience of the Irish diaspora

“blending truth and fiction, glory and sport, love and loss, darkness and despair, while introducing composites of individuals, companions, friends and foes met along the punk rock journey.”

​Now signed to local record label Stomp Records Down And Out In The City Of Saints begins with ‘Give Us A Roar’ and its Celtic-Punk in it’s purest form. A backbone of Irish music ably joined by Punk and Rock’n’Roll that from the first few notes lets you know what you’re in for here! The title track follows and ‘Down And Out In The City Of Saints’ follows in the same energetic mode of music to beat up the floor to. Lyrically these are not your usual Celtic-Punk fayre of drinking and fighting songs (though their is some of that!) and these songs tell stories in the traditional sense.

“You can drive me to drink, I’ll give you the keys And I’ll chart a path to the sea”

The first track from the album to be released was ‘Prizefight’ and a great decision being the album’s standout track for me with singer/songwriter Dave Barton again coming up tops with a sing that channels both Rancid and The Tossers. Bagpipes appear for the next track on ‘Spirits Seldom Sober’ and if you can keep up with Dave here singing along to the words then hats off to ye. Heavy but not fast it has slower interludes of gang vocals and a brilliant pint in the air chorus.

“In bliss or torment judge him now but it’s not what you are thinking. It was an angel that put it in his hands but a devil made him drink it”

We step into real Irish territory with ‘Stick And Move’ a corker of a Gaelige rocker about Irish boxer Gary ‘Spike’ O’Sullivan, the pride of Cork city! Holder of multiple belts including Irish, WBA and WBO titles he also tread the boards starring in several films. ‘Rakes Around The Point’ carries on in the same Irish vein with a track telling of hoods, gun and gangsters.

The only video to promote the album was for ‘Glad To See The Back Of You’ which came out on St. Patrick’s Day. The song itself was actually a reworking of a demo from 2004 along with the album closer ‘From Here To Halifax’. The band excell themselves next with ‘Last Glass’ a rather beautiful wee gentle number with piano with Dave’s words spilling over with emotion proving again this guy is up there with the best in Celtic-Punk history.

The boxing metaphors continue on ‘Harder They Fall’ an irish rocker laced with a spirit of rebellion and defiance. The curtain comes down with ‘From Here To Halifax’ and I don’t think they mean the market town in West Yorkshire so it must be Halifax in the overseas Celtic territory of Nova Scotia. A working class fishing port it has long been associated with Celtic culture and immigration. The track is a cracking light hearted drinking song celebrating the town and a real good way to end things.

It may only be their third album in 22 years but isurely a case of quality over quantity! The albums ten tracks last almost forty minutes and has superb production as well as a pretty amazing cover by Canadian / Filipino artist @therealdannyrebel. Hope you guys are getting this knocked up as t-shirt? So St. Patrick’s 2021 did come good in the end and I look forward to still be playing this on next years one too!

The album is also available from Stomp Records