A solo album from Irish Folk ballad singer Kevin O’Driscoll that steps away from his usual material. A ‘Rock’ album that dips it’s toes into several other genres but always with ‘Folk’ at its heart. 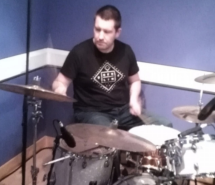 seeing as how the album veers from trad Folk right up to Punk then trust me that’s a lot of instruments to be playing. Kevin is a native of Tyrone in the north of Ireland and when not recording Kevin usually puts food on the table by touring the length and breadth of Ireland (with occasional visits to Scotland) as a Irish ballad singer performing Irish Folk songs and the ‘rebs’. He’s been doing this now for well over a decade and he was one of a handful of Irish singer/songwriters that took good advantage of the Covid lockdown to carry on performing if only virtually on Facebook. It was on one of these live streams that I first came across him and looking deeper I found some material that I thought warranted further investigation on behalf of the London Celtic Punks!

Operation Underdog kicks off with ‘Enemy’ and one of the best songs on the album. Chugging guitar and Kevin spits out the bitter and angry lyrics about friends falling out and the lengths we go to after. This is followed by ‘Favourite Drug’ and some of these songs have been around on social media for a while but this is the first time they have been compiled with new stuff into one album.

The topic of this song is unsurprisingly drugs. While Ireland does have a serious drug problem it is of course only the working class that die from overdoses. The song ties us in nicely to compare Kevin favourably with my own favourite Irish singer-songwriter Damien Dempsey. If you could imagine Damo singing for a rock band you’d not be a million miles away. Operation Underdog is undoubtedly a Rock album though ‘From Dublin To El Paso’, the most Irish song here, I’m sure is a firm fan favourite when Kev is doing the ballad sessions too. A song about the days when the Irish left Ireland for work and the places they went and what it is that defines us.

” There are two kinds of Irish. Those that are and those that wish they were”

From the earlier comparisons to Damo on ‘One Man Show’ Kev never sounds better. A great slow song about a friend who passed away. For all the differing styles here the album flows remarkably well thanks in no small part to Kevin’s fabulous vocals. Here on ‘For You I Die’  he takes a Mod-ish number that could also pass for some much bigger bands and the type of song they can only dream of writing these days. Catchy as it all is here and spilling over with emotion.

A great song and one of the best here. ‘Letting Go’ sees Kevin O’Driscoll the ballad singer coming out with a tender song that changes tempo half way through from ballad to something with more oompf and finally settles in a song that drifts along making you tap your toes and nod your chin. He follows this up with another album standout ‘Alcoholiday’ and some great guitar work in a catchy story of a man whose let the drink get the better of him and sees his life slipping away unless his does something about it.

Kevin turns up the rock again for ‘Fighting God’ and puts his voice to good use,. I could almost describe it as ‘grungey’! The mod-ish/ Monkeys/ Chiefs sound of ‘How Does It End?’, the ‘Gravity’ and ‘Watch Over Me’. The album ends with ‘Back From The Dead’ and a ballad about that other curse of the modern Irish – suicide. A long song about the horrors that such a act brings. If this album had one epic then this it.

So what to say? I’m sure to fans of Kevin’s ballad singing it will come as a bit of a surprise especially the more Punky bits! Kevin has a great voice and can certainly hit the notes whether he’s belting out one of them Punky songs or a ballad. Like I mentioned earlier some of these songs have been around a handful of years but it’s great to hear them in one place among like minded newer material. All the songs were recorded in various Dublin recording stations and it’s one hell of a thing to be able to produce a album of such quality when you’ve played every instrument. Cap off t’Kevin.