THE CRAZY ROGUES NEW SINGLE ‘Empire Of Sand’ OUT NOW

Hungarian Celtic-Punk band The Crazy Rogues are back with a new Folk-Punk song inspired by a different part of the world than usual but still with as much crazy, rogue vibe as they could muster.

2015 and 2017 were the years that Hungarian bands dominated the Celtic-Punk scene. A whole slew of bands had releases that filled those years Best Of charts and one of the many bands was The Crazy 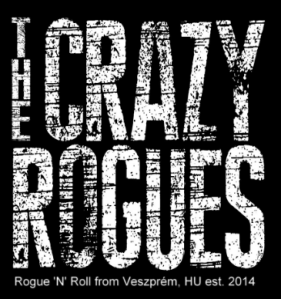 Rogues. Founded in 2014 in the city of Veszprém their stated aim was to spread the mood and atmosphere of Irish pubs all over Hungary.
One of the things the Hungarian scene was famous for was not sticking to the standard Celtic-Punk formula and The Crazy Rogues mixed in plenty of other influences from around the world for a sound they called ‘Rogue’n’Roll’.
With things returning to normal it’s great news to see bands back on the stage and back in the studio and a brand new track, Empire Of Sand, came out last week. The video below is a slightly different version from the one released so be sure to listen to the Bandcamp one below as well. The song is the first single from The Crazy Rogues forthcoming new album, set for release soon, and blends their trademark Celtic-Punk sound with Arabic tunes. It will feature twelve songs, of which eight will be new compositions from the band, and we can’t wait to hear it.

The Sun goes high,
Crawls towards the top of the Sky…
It shines so bright
It makes you wish you could die

Our name in your mouth:
stinky slave dog
You think my life or
death’s worth even less than a great slog
You refuse to rest
at our campfire
But our dirty hands
are building your empire

Chorus:
Hot sand in waves
worn-out slaves
Just keep the pace
It’s a deadly place
Pyramid’s tall
I will outlive you all
building it up
you will have to fall