The third album from Arizona based Swainn (also known as Cockswain). Sunburnt Celtic-Rock sealed by Punk-Rock energy and desert heat.

Sitting here in a big jumper with a icy droplet hanging off the end of me nose trying to escape the bitter cold it’s hard to imagine a world where people listen to Celtic-Punk all year round in t-shirts and shorts but we Irish are a travelling race and we are everywhere! What those first Irish settlers thought when they first washed up in Arizona we can only imagine but it may have been along the lines of “phew” ! So it is that wherever you go you’re always guaranteed to find a Irish pub and more than likely a band inside it. 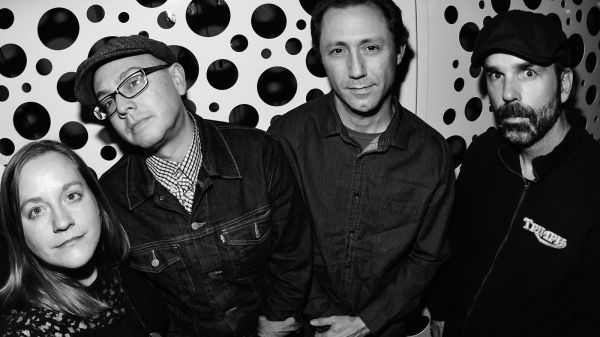 It’s not uncommon for Celtic-Punk bands to trace their origins back to St. Patrick’s Day. The lure of a bit of cash (or free drinks!) must seem appealing and many seem to enjoy it so much so that one or two offs become four or five and eventually become permanent. Well nine years on from their humble openings around the pubs of Tucson and marathon three hour sets at packed pubs throughout the wider Phoenix area it’s now time for Swainn’s third album. They have appeared on these pages before back in 2017, when known as Cockswain, with a review of their second album ‘For The Whiskey’, a follow up to their debut album ‘Seamus’ in 2014. Taking the well worn route of mixing originals and Irish standards their audiences soon grew alongside many successful festival appearances but the appeal for a musician is always to play your own material and that is where they are now with Under A Willow Tree. As Neil says “we started out as a scruffy sea shanty Irish band who wrote drinking songs, and we’ve come so far”.

The title of the album Under A Willow Tree represents for the band symbolism, myth and history. As fiddle player Mandy explains

“The Willow itself has Celtic symbolic origins, the tree really represents a lot of synchronicity for us, because Neil regular references nature in the lyrics. When we were settling on the title, I was studying mandolin techniques online one night, and the video was set to none other than ‘Bury Me Beneath Willow’ by Woody Guthrie. It was meant to be.”

The album kicks off with ‘Voices’ and for those this side of the pond it has certain resonance with English band Mick O’Toole. Fast and heavy with the banjo pushed hard into the mix and Neil’s vocals growling out at you. A grand opening and while I may have made it sound like like some sort of Celtic Napalm Death it has that undeniable accessibility that any generation could warm to. Next up is the album’s lead single ‘Bag O’ Bones’ and sometimes a press release can get a wee bit too flowery

“I was reading a bunch of Ram Dass, he was a psychedelic Buddhist teacher who moved on to another plane. ‘Bag o’ Bones’ is basically your body in a sense. Your spirit is anchored down until you pass on. That’s what the song references.”

God alone knows how I would have described it otherwise! ‘In The Morning’ began life as a straight up drinking song before becoming about mental health and depression and sadly I’m not sure anyone knows more about the sad connection between the two as the Irish and yet ones of my generation still worship the grain. Great banjo from Wake here and a real thigh slapper before ‘Take Action’ whish begins in a trad Folk style before mixing in some bluegrass style while making a simple statement without ramming it home thank Heavens. The mention of Bluegrass is quite as apt as the acoustic  ‘Home’ takes it to the next level with a song that could almost come from another era. You know after that we are due a stormer and we get it in ‘Let’s Get Loose’. A quick and jaunty trip with lots of gang shouts and a right rowdy Celtic Folk knees up. ‘Sink Or Float’ is a bit more on the poppier side of things but still unquestionably just as catchy while telling us of the journey of outcasts.

‘Fairwinds’ is more traditional Celtic-Punk sounding not so far off Flogging Molly at their best. A uplifting number with great banjo and fiddle. A “raucous fight song meant to kick everybody’s ass” according to Neil. One of the things here that makes Under A Willow Tree a cut above most Celtic-Punk albums is the quality of the songwriting and ‘Up On The Mountain’ is a perfect example. Celtic-Punk should, in common with Celtic-Folk, be about story telling. There is no other genre that could ever get you jigging about to a song about dying of hunger or alcoholism or despair!

“I hope people have a good time when they listen to us or see us live, that’s always the goal for us.”

We washing up to the end and time for another slower number in ‘Brand New Day’ before the album ends with the fantastic piss taking ‘Another Drinking Song’ where the band take the mickey out of themselves in what could be described as ‘classic Celtic-Punk’.

One thing I know is that whenever I have been anywhere hot I always get a urge to go sit somewhere cool where cold drinks are readily available so if the folks from Swainn are anything like me this is where they find their inspiration! On Under A Willow Tree we find Swainn moving away from the “scruffy sea shanty Irish drinking songs” that they began with but still staying true to the traditions they come from but trying something more sophisticated.

Buy Under A Willow Tree  Here