The Moorings are an ultra-energetic quintet famous for delivering an efficient mix between Celtic folk and alternative rock. 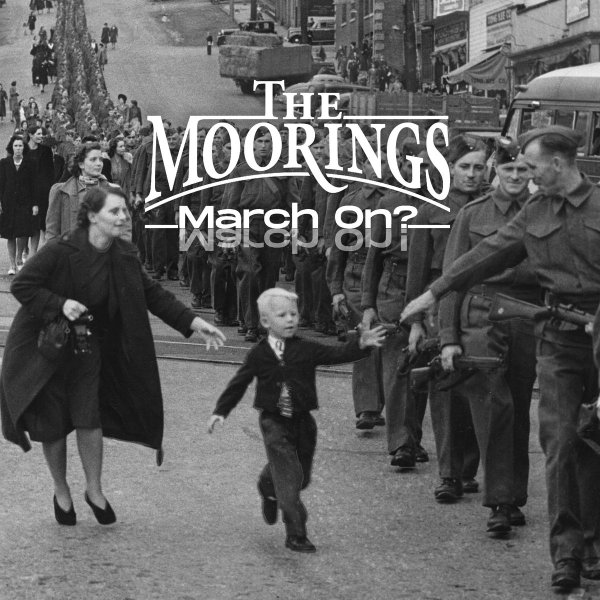 As far as I am aware The Moorings are the only Celtic-Punk band out there endorsed by The Dubliners when Eamonn Campbell waxed lyrical about them after they shared the stage at a festival. He compared them to being “a cross between The Pogues, The Dubliners and themselves. In other words they’re unique they’ve got their own individual sound whilst incorporating other influences of an Irish/punk style”.

Formed in 2011 in the town of Sélestat in the north-west of France by the border with Germany The Moorings began their journey with with their debut 5-track Pints And Pins EP that same year. Shunning the typical Celtic-Punk of recording covers The Moorings have always prided themselves on writing original music. Later that year they put out a live album La Cigale Unplugged, which was followed by Nicky’s Detox EP in 2014 which really saw the Celtic-Punk media around the world sit up and take notice. The song that really raised interest in the band, ‘Shandon Bells’ features Frankie McLaughlin on guest vocals and helped the band make just about every Celtic-Punk podcast out there! Their final release was 2017’s Unbowed. Twelve superb tracks that lasted over forty minutes that made the Top 20 for that year in the London Celtic Punks best of year poll.

So five years on March On!? appears and it’s not every release I get excited about but I’ve been a big fan of The Moorings ever since I first heard them so I was looking forward to this and even better was certain I wouldn’t be disappointed. The album begins with ‘Cheers’, the first song released from the album in December last year. It’s fast paced Punky stuff combined with singer / guitarist D.Phil Jelly’s gruff vocals it reminds me of some of the harder edged Shane MacGowan And The Popes material. Simple but effective and uplifting lyrics leads onto  ‘Nothing Is Going My Way’ and a Rancid comparison is unavoidable but with added banjo and accordion. Catchy as hell and areal foot tapper. One of the great things about The Moorings is their collaborations with other bands and next song ‘Gin’s My Sin’ is one of their best yet featuring ex-Pogues member Jamie Clarke (whose band, Jamie Clarke’s Perfect themselves had an album reviewed by us recently) on vocals and unsurprisingly a Pogues influenced song about ‘mothers ruin’ and in a scene dominated by Whiskey and Stout it makes a pleasant change!

I love an album that doesn’t sound the same all the way through and ‘Streets Of Northbridge’ is a prime example. Still on the Punkier side of things it rocks along at a decent pace but it remains accessible to the more Folk orientated folk in a way that was maybe pioneered by Frankie and The Rumjacks. Probably by favourite song here if I’m honest. Title song ‘March On’ next and the accordion is pushed forward while D.Phil sounds like a combination of Shane, Joe Strummer and Tim Armstrong while ‘Ode To Sailor Jerry’ is dedicated to that brand of Rum popular in bar dives across the world. Fast and energetic leading us into an inspired cover (the album’s only one) of the Tears For Fears hit ‘Mad World’. Truly a pleasure to hear a band take a risk on a cover that is somewhat unusual. It’s a great choice and reminds me of the only other band who takes risks like this in Celtic Punk – Mr. Irish Bastard. A brilliant version. We steering up towards the end now and ‘Liffey Song’ is more standard Celtic-Punk in music and lyrics but still a blast. Anyone who knows us knows that we are all big football supporters, drawn together by a love of Celtic and Punk, so next song ‘Football’ really hits the back of the net (…groan) and features German Celtic-Punk legends Fiddler’s Green before final number ‘Treasure Of Gold’ and a beautiful slow ballad brings down the curtain.

Another cracking album from The Moorings and thirty-five minutes of highly originals (even the one cover!) Celtic-Punk that anyone who considers themselves a fan of the genre should be listening to. IT’s bands like this that keep Celtic-Punk on the move. Always innovating and inspiring and producing great music.

(You can stream and download the whole of March On!? via the Bandcamp player below)