One off collaboration between indie-pop pioneers Primal Scream and 80’s legends Dexys in solidarity with striking rail workers. 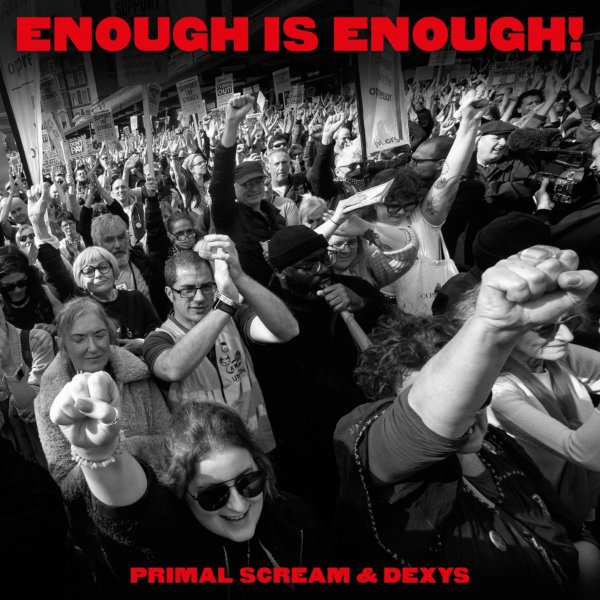 After a plea from the National Union of Rail, Maritime and Transport Workers Twitter account to Dexys Midnight Runners frontman Kevin Rowland an amazing collaboration was born between indie-pop pioneers Primal Scream and 80’s legends Dexys to create a fundraiser for the RMT with an original song called Enough is Enough! The song was inspired by both the RMT and the nascent Enough Is Enough campaign. As such, all proceeds go to the RMT dispute fund and huge thanks and eternal gratitude go to both bands, in particular Kevin Rowland and Bobby Gillespie and also to former the Jesus and Mary Chain bassist Douglas Hart for producing a wonderful video.

All proceeds go to the Dispute Hardship Fund https://t.co/GuLp7BZmjh

Video by Douglas Hart and edited by Gully with special thanks to Ed Hall.

It’s all a big con to keep us confused

The bottom line is we’re all being used

While we fight each other, we’re going nowhere

We need to take on the fuckers who show us no care.

RMT general secretary Mick Lynch, himself a second generation Irish Londoner, a child of Armagh and Cork parents, who makes a guest appearance on the track said.

“As we go into further strike action this Saturday this sort of solidarity, which these talented musicians gave completely free of charge, is an indication of the huge support we are getting from across the country. All the money from this single will go directly to our dispute fund which we are using as part of our battle for justice in the workplace. It’s time for the government to stop interfering and let us negotiate a settlement with the employers.”

You can buy the download for Enough Is Enough via the Bandcamp link below.