Well here’s a first for the London Celtic Punks! We thought we had covered just about every corner of the world but then somewhere pops up that totally astounds you. Today’s review is of the band The Kono Rogues from the beautiful island of Hawaii right out there in the middle of the Pacific ocean. It is the only U.S. state located outside North America, the only island state, and the only state in the tropics encompassing 137 islands spread over 1,500 miles and just as you would imagine the Irish even washed up here with almost 5% of the island of proud Irish heritage. 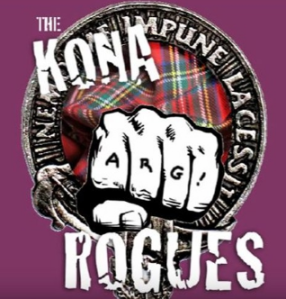 So it is that the charismatic Irminsul a native musician of the island who has spent most of his life playing Celtic music and who was guesting on St. Patrick’s Day for the band Creacialtie on his Celtic harp (another first for London Celtic Punks. A Celtic-Punk band with a harp!!!) alongside fiddle player and island musical icon Joanie Collins, who was also guesting. Well a year on Irminsul calls Joanie and the end result has been The Kona Rogues. Kona for their home town on the island and Rogues because no one had ever tried to do what they were doing. They were literally smashing conventions. As Irminsul says

“Be open to what comes next, because this aint your granddaddy’s Celtic music.”

As I said Irminsul has spent years of his life playing in Celtic bands, both as a solo artist and singer/ songwriter. Joanie had a similar background in Celtic music while guitarist Seishi Saegusa is famous on the island for his musical ability and drummer Todd Oldham has played with some of the greats in the music world but their short time together hasn’t been without controversy.

“We got a fair amount of flack from traditionalists who just think it’s not possible to perform original, modern Celtic rock on this island but thanks to some ground breakers like Creacailtie and The Kilt Lifters, that was completely wrong.”

Batten Down The Hatches is the perfect title for an album representing both the island that is regularly hit by hurricanes and a style of music that most will never have come across before. The album kicks off with ‘The Pikes Will Be Together’ and if unabashed catchy as feck rebel music is your thing then we’re all in the right place! Music and lyrics are by Irminsul, like on most of this album, and based upon ‘The Rising Of The Moon’. A pike is a long pole used by infantry until the early 18th century when it was later replaced by the bayonet and was used extensively by Irish rebels during this time.

“The pikes will be together and the nation will be one.”

The music is as I said is very catchy with the fiddle and harp leading the way and Irminsul’s great and distinctive vocals while electric guitar and tribal drums give the tune a very modern twist to its ancient Celtic roots. Next up a couple of songs well known to readers with ‘Whiskey In The Jar’ and Celtic-Punk favourite ‘The Foggy Dew’. Not a lot to say except yeah, they are very good and are not just simple covers with ‘Whiskey In The Jar’ also including the famous traditional Irish jigs ‘Swallowtail’ and ‘Kesh’ showcasing Joanie’s amazing fiddle skills while ‘The Foggy Dew’ is played significantly different to any version I have heard before with the tribal beat of the drums and a great almost ballad like speed. Tremendous.
Next a bunch of more originals written by Irminsul beginning with an ode to the legendary Michael Collins. Collins was the driving force behind the Irish revolution during the War Of Independence (1917-1921). A soldier and politician who was was unafraid to get his hands dirty if you know what I mean! He was assassinated in August 1922 during the Irish Civil War.

Beautiful lyrics that make the hairs stand up on your neck. One thing sadly missing from Irish music these days is decent modern Rebel songs. Most tend to be pretty cheesy and predictable while The Kona Rogues have plenty of good ones that don’t follow the ‘Irish rebel song blueprint’ like most. ‘The Bairns Of The New Brigade’ even has Gothic pretensions while cheering the Bhoys home in a song that is quite poppy and accessible.

“Now we sail for a strange land, we don’t know a soul
They’re telling us that now we’ll be harvesting coal”

Next is ‘Link Arms (Until Freedom Has Won)’ and a heart lifting song giving hope that one day injustice will be banished not just from Ireland but everywhere. For the first time we hear more traditional harp playing from Irminsul and it is indeed a beautiful instrument that adds much to this song that switches several melodies along the way. Definitely a standout song on the LP. ‘Oro Se Do Bheatha Bhaile’ is a traditional Irish song meaning ‘Oh, Welcome Home’ in English. It’s origins are unclear but it has become associated with Irish nationalism and recorded by many Irish Folk greats. Perhaps the most amazing thing here is Irminsul’s immaculate Irish in telling the songs story. At a time when most Irish bands know as much Irish as I do (basically nothing!) it’s great to hear. The song itself is quite unlike any version you’ve ever heard with a lengthy Prog-Rock interlude in the middle led by Seishi’s electric guitar work. The Kona Rogues take a much darker route next with ‘Yeah’ which just so happens to be my favourite song here. Clever and humorous lyrics (this man Irminsul is a true seanchaí) abound with a song that manages humour, revenge and bloodlust with ease with a song that encompasses The Cure, The Cult and Siouxsie And The Banshees!
We are steering up towards the end now and its about time for a love song and its delivered via ‘Whiskeys The One I Take Home’. Not yer traditional Irish love song it has to be said with the object of his desire not some lass- not for the want of trying though but that other well known subject of many a Irish song. Another class song bursting with humour so in a way it is a traditional Irish love song. Batten Down The Hatches comes to an end with ‘Lenadoon Lament’ a beautiful commemorative funeral air for all the battles lost by the Irish Republic. A quite amazing way to bring down the curtain. 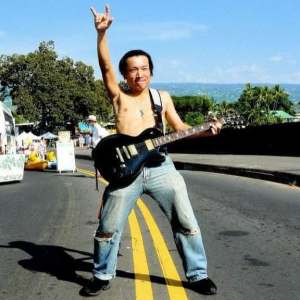 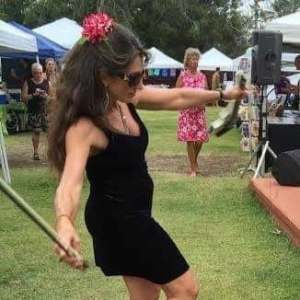 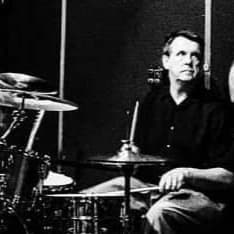 Batten Down The Hatches is over forty minutes and eleven songs of mostly original material and even the few covers can be described as anything but covers really given The Kona Rogues treatment. To say I am surprised at this album is a MASSIVE understatement. From the lyrics to the musicianship displayed it is simply an outstanding piece of work. Added to all that is Irminsul leading the way (like someone said ‘Sid Vicious on electric harp’ !!) achingly re-telling and telling of the struggle that is still ongoing now to unite one island far away from it on another island known by many to be a paradise. Irish music that would make you believe it is from ancient times butting up against ‘electric high octane rock bordering on punk’ that even then seems to come from another era. From beginning to end I heartily loved this album and recommend it to all who love a good shout out to Ireland from across the world.