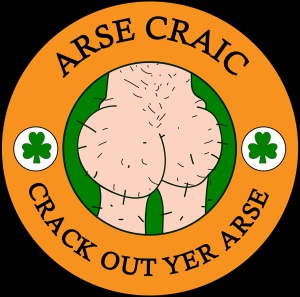 The Irish community in London is old and long established and quite frankly massive. Apparently around six million Britons have an Irish grandparent (about 10% of the UK population) while 900,000 people of Irish descent live in London which equates to 12% of the city’s population. Obviously to some this doesn’t matter but most are proud of those Irish roots even if they still consider themselves English through and through. With such a large community it shouldn’t surprise us that every now and then a gem of a CD will be unleashed and we will be the last to know about it! AS it was a couple of months back when I was trawling the web and checking out the wonderful Celtic Folk Punk And More web-site (here) and came across this album by Arse Craic. On further examination I realised they were from London so I bought it and a chorus of

has been stuck in my head ever since! Sadly for us, and you, Arse Craic seem to be based in different countries so they don’t gig very often and that of course also makes it hard to promote the album and the band but when some of them aren’t in Arse Craic a few of them play in the more easy on the ear Craic Dealers in the pubs and clubs around London. 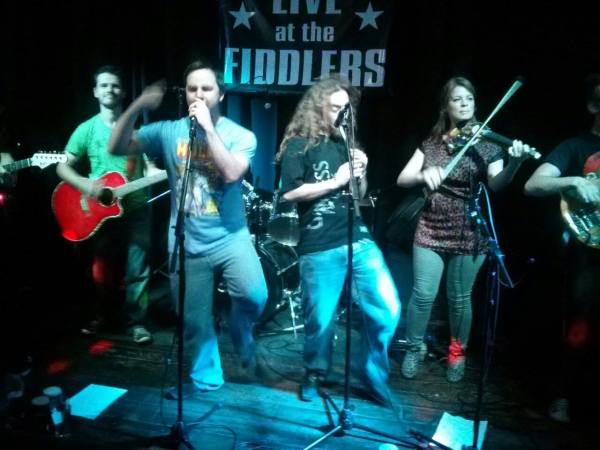 The album begins with ‘Romeo’ and from the first couple of bars you know exactly what to expect from this album. If I could compare them to anyone it would be like a Irish trad Toy Dolls! The production is great and the sound shows all the instruments at their peak. Even more so when you find out it was all made at stupid o’clock, after many pints, in a bedroom studio and uploaded from a phone on the way to the album launch! Not enough bands have uileann pipes and even though they don’t feature in every song it’s lovely to hear them. Punk rock guitars and Irish trad and I’m in celtic-punk heaven.

(ignore the sound quality and just enjoy it!)

Tin whistle starts ‘Earlie In The Mornin’ before crash into a ska number before bursting into a punk rock chorus and fiddles jump in and we’re starting to get an idea of the way Arse Craic work.  Nothing too serious would seem to be the idea and ‘Captain Craic’ confirms it with an accordion laden number full of “yarrs” and pirate themes. Slowest track so far but also the catchiest and just to warn you that you may not want yer Nan to hear this album. Sure you know what I mean!

On a pirate ship I sail the sea

I never met a fella who was quite like me

They call me Captain Craic

‘Irish Giant’ and ‘Have Another Pint’ are two more traditional sounding celtic-punk numbers but with the Dub brogue over the top you can tell this is authentic paddy rock. ‘Pauraic’s Aul Moustache’ shows that Arse Craic are not simply a bunch of rowdy punk rockers and can play their instruments along with the best of them but they still are determined to stay away from anything too serious and just when you get settled in they crank it up and the guitars come in and try to compete with the tin whistle. ‘Tommy ‘McGrath’ is up next and I’m sure Tommy is proud of this song about him. I would hope so anyway. ‘The Rampage’ is a folky ska chorus laden skanky number…so just like the rest of them and like the others guaranteed to get you up on your feet and spilling your drink.

The urgency seems to get a bit higher with the second half of the album and ‘Shambolic Frolic’ is a straight up glam punk rock with a brilliant Oi!-ish chorus. For me the best song on the album and not a sign of a celtic instrument in it at all! ’70p’ is yer typical musician’s story of playing gigs and getting paid 70p. ‘Hey Lads’ is fiddle and electric guitar led and has a great “Oi!” chorus giving you plenty of chance to wave your pint in the air. If Arse Craic has any sort of serious song then it would be ‘Paddy Went To Moscow’ which does at least cover the subject of emigration although in that Arse Craic way so dont be expecting ‘Thousands Are Sailing’! A sort of skanky-yiddish style that ought to end with the sound of plates being stepped on at a wedding it speeds right up to frantic pace and leaves the band breathless. The album ends with ‘Theme From Your Arse Craic’ and sounding like The Bloodhound Gang covering The Chieftains they leave you with a giant smile plastered across your face. So you get thirteen songs lasting just over a half an hour of fast paced Irish folk-punk with a wee pirate twist and silly irreverent lyrics about all sorts of shit. Arse Craic have made the album ‘Name Your Price’ so you get to choose exactly how much you pay from nowt to £1000! We would hope that you would at least chuck them a few quid but the band want it heard so don’t be letting money trouble stop you getting this as at least you’d be skint with a smile. Infact the band told me that you are totally welcome to choose to pay £0 for the album just so long as you share it with someone else online or whatnot. Arse Craic have a sound that sets them apart from the rest of the London scene bands like The Lagan or Neck this band (and if you spare a moment or two to watch the sweaty videos of them performing above I am sure you will agree) are an excellent addition to the London Celtic Punk scene and we look forward to working with them sometime the next time they are all in one place!

Welcome to the first #thecelticpunkcast of 2020! The scene just keeps on getting bigger and better so here’s an hour of the best in #celticpunk, #celticrock and #folkpunk from all over the world including a song that has certainly been making waves over here on both sides of the Irish sea!! Follow the link in the bio and stream live or download to listen to later and enjoy!