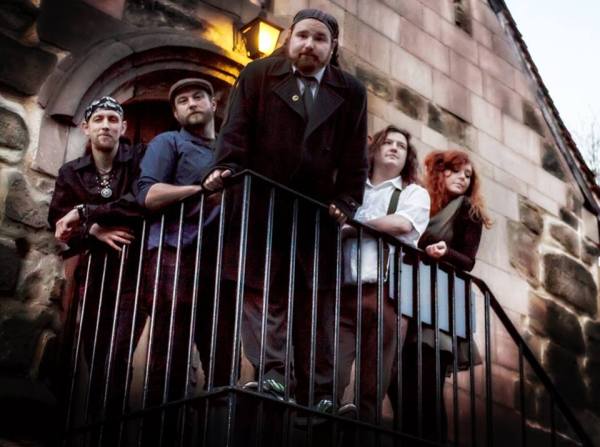 Who the Hell are Blunderbuster?

Blunderbuster are a 5-piece Midlands-based celtic-punk band, seamlessly blending the memorable melodies and hooks of traditional Irish folk music with the upbeat rhythms and heavy guitars of punk and metal!

Formed in the summer of 2010 Blunderbuster’s core members have 5-years experience of continuous live performances as a unit, with each of the current members bringing further music industry experience to the table. They also recorded a 5-track self-produced, self-titled EP which we reviewed back in and you can read here.

Although the band have experienced various line-up changes and the death of longtime fiddle slayer Hywell, they’ve managed to keep the momentum going, finally finding the final two cogs to complete the machine. Baden on drums and Cora on fiddle make up the latest rendition of Blunderbuster, forming a real good feel and chemistry previously unseen inside the band’s anatomy.

What We Need & What You Get

We’ve pooled our savings, done the maths and figured some figures, done a great deal of research and have a final shortcoming of £1,300 to fund an entire album. This isn’t just the time in the recording studio, and can be broken into several categories and stages:

This list is not exhaustive and if we wanted to, we could come up with a list as long as our arms. And of course, these tasks all require professional people and professional man-hours also cost money

So we’re hoping that you guys could each pledge a little from your own pockets to help us see this production idea become a real full album release. We realise this is a lot to ask but being funded by lovers of music makes this whole thing seem more real and worthwhile. And, of course, the more invested the fans are, the more it means that we have to get this right and make something especially awesome for you all to enjoy!

By now you must be wondering what we’ll be getting for all this money? Well, the final product is a full length studio album, which we hope to be somewhere between 8 and 12 tracks. There will be an initial run of 200 physical copies, complete with a full printed booklet and some fancy looking artwork. Our music will be sent off for ‘digital’ distribution on iTunes, Amazon MP3, we’ll probably end up on Spotify and all of the other digital music platforms too. There will also be t-shirts and maybe even hats!

But most of all we’ll be getting the satisfaction that you guys, as fans, want to hear something that we’ve made – and that’s pretty special to us because without fans none of this would be happening and it wouldn’t be possible!

You Can Probably Stop Reading Now But…

If that’s not enough for you, here are some of the finer details:

The studio itself is located in Derbyshire just outside of Alfreton, and is a cool little place with a really cosy, home-feeling vibe. It’s all been kitted out professionally, boasting a whole range of really cool and weird studio stuff. Behind the helm at the studio will be Danny C, a local engineer with more than 10 years worth of experience in doing what he does (which is getting creative with bands to make the best records they can!)

So thanks a lot for reading this, please share this page if you have Facebook, twitter or any other social media platform and we’ll hopefully be presenting you with an album soon!

Lets make it happen
for Blunderbuster’s First Full-Length Album! and the celtic-punk family!

click HERE to go to the site and donate or buy the album on pre-release. It’s only a fiver for the download or a tenner gets you the physical copy of the CD. So get clicking and support your scene…

Not sure what they’re putting in the water up north but hot on the heels of us reviewing the debut album of Stoke’s Headsticks (here) comes this EP from Blunderbuster from Derby.

Blunderbuster were formed in 2010 and their sound mixes elements of traditional British folk music with punk and metal as well as elements of celtic music giving it a real celtic punk feel. Though be warned this EP is not for the faint hearted and any folkies out there may find it a bit too much but for us here its rocks our socks off and we cannot wait to hear more!
Formed out of a mutual love of all things folky and all things heavy. Blunderbuster started life with a vastly different line-up including a different bassist and drummer, as well as an accordian player and a tin whistle and banjo player. But as we all know sometimes life gets in the way and changes had to be made. The dropping out of most of the folk instrument players curved Blunderbuster’s sound to be much heavier and more punk oriented. Thus creating the sound that you can now hear on this EP.

The EP kicks off with ‘Danis House Party’ and with the gruff vocals and metally guitar it could steer itself into folk metal territory but luckily it stops just short and returns to good auld celtic punk with touches of the more punky side of The Dropkick Murphys. ‘OLd MacQuarie’ follows and begins with acoustic strumming and nice vocals until some furious drumming continues the assault. ‘Picked Up And F**ked Up’ is the alcholocaust song of the EP. Telling the tale we all know only too well of…well you know what! ‘Kick Arse Celtic Punk Band’ is definitly the most celtic sounding track of the EP but the guitar vocals drumming and frantic fiddling stop it well short of sounding like Enya! Final track ‘The Crucible’ rounds it all off nicely with a bit more of a metally song.
Loadsa swearing and catchy choruses and not just fist in the air but fist through the window moments. Blunderbuster are for sure one of the heavier punk bands around at the moment in the celtic/folk punk world and carry it all off brilliantly. Just under 20 minutes and the band have made it available for free download so head over to their Soundcloud page and get clicking. Looking forward to hearing more from Blunderbuster and if you like the punkier side of celtic-punk then these ‘six crazy bastards’ will be right up your street!
Contact The Band
Soundcloud  Facebook