The new album celebrating the twentieth anniversary of SMZB.

One of the scene’s best bands and the only celtic-punk band in China! 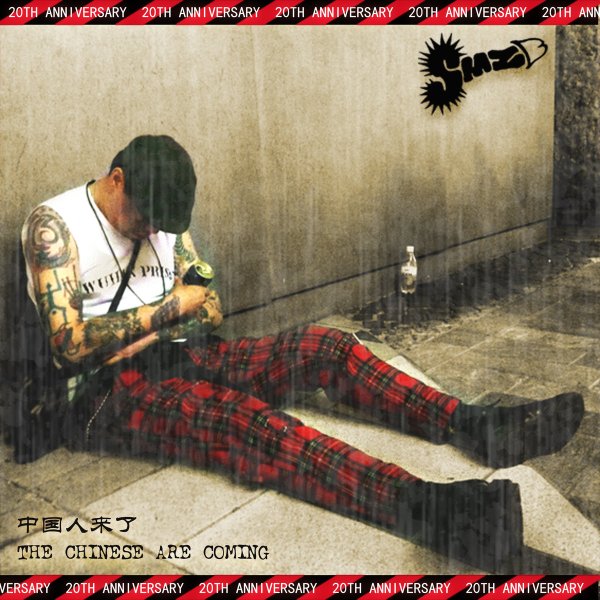 Celtic-punk in 2016 is truly a global music genre. Gone are the days when it was the preserve of spotty second, third or fourth generation Irish kids and welcome now to the World Of Celtic-Punk! SMZB hail from Wuhan in mainland China and were one of the first original Chinese punk bands forming in 1996. The name SMZB means Sheng Ming Zhi Bing and in English is literally, ‘Bread of Life’. Unsurprisingly when you hear their music the Chinese authorities have never taken kindly to them and so three of their albums have been banned at home. Sometime around the mid-noughties they made the decision to move away from their original raw sound of early British punk, ska and ’80s hardcore and add bagpipes, flutes and fiddles to their sound. Sounding like a combination of The Pogues, the Murphy’s and Rancid they have deservedly become absolutely huge in their native country and their fame is growing outside China too. They have toured Europe a few times, including earlier this year though sadly never visiting these shores, as well as recording several acclaimed albums including a split with Norwegian celtic-punk legends Greenland Whalefishers. 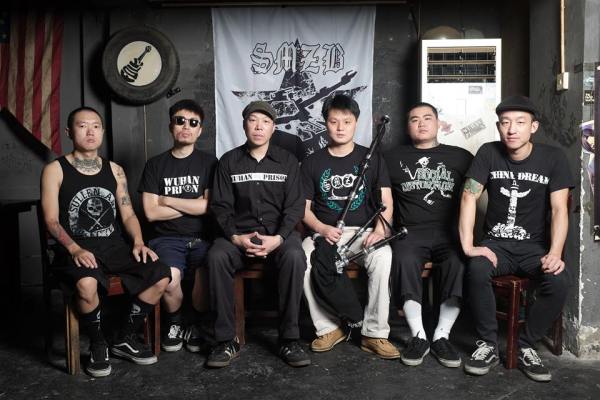 The Chinese Are Coming was released on Maybe Mars Records on September 30 this year and begins with the drone of bagpipes through the ‘Intro’ with pounding drums joining in and soon enough the album explodes in your earholes with some quality celtic-punk. SMZB may have been the first and still are arguably the best Chinese punk band but the video to the album’s real opener ‘Ten Thousand Ways To Rebel’ shows they are not alone and features several other local punk bands and is a tribute to Lei Jun China’s first skinhead and Beijing’s punk godfather, who passed away a year previous to this video being premiered this year on the 6th of May.

Reading through the lyrics and knowing the conditions they live in you can only marvel at how brave the band are for singing what they do. It certainly shows up some of the ‘revolutionary’ bands in the west who seem more concerned with getting on the bill at Rebellion festival and getting a huge payday.

“You cannot change anyone in the world,
The only one you can change is yourself.
When you find out the truth and their lies,
That’s when you should do something”

The band to be referenced most here is of course The Dropkick Murphys and SMZB have nailed their sound perfectly. It is all bagpipes and catchy as hell punk rock. Up next is ‘The Chinese Are Coming’ which was the first single off the album and begins with a Ramones-ish

and while on the accompanying video the lyrics are sung in English on the album its in their native language but the words show SMZB’s great sense of humour as well as adding in a great bit of Irish folk thanks to some expert tin whistle playing.

‘Born In The PRC’ is not a celtic-punk version of The Bosses song but an angry and vitriolic response to the nationalism of their government and what punk means to those who face real oppression on a daily basis not like the pampered students here in the west whose oppression is only inside their own imaginations.

SMZB keep up the pace with ‘Road To Petition’ which brings in the banjo to great effect while ‘Generation’ has a much more traditional folky feel to it showing that the lads can turn it up and down when required. The next song is ‘Flower Of The Socialism’ and is fast heads down, balls out, two fingers to the world, punk rock which slows down only briefly for a few seconds of tin whistle while band founder Wu Wei spits out the words that obviously come straight from his heart.

“You have to try to play your role well, or choose to be a bastard.
You have to try to forget your dream, and then into the arm of reality.
You can’t to extricate yourself from here, you are the one of scars.
Socialism already in bloomed here, you have also sprouted in this land”

The next couple of songs, ‘Sunny Speculation’ and ‘One Night In Prison’ are sung in their native language again. Fast tuneful Murphyesque punk is the order of the day. They may have started as a straight up punk band but its thanks to the fantastic abilities of Tang on bagpipes and tin whistle and Tu Dou on banjo that that transition has been so successful. ‘Welcome To China’ sees a return to English in a song that bites back against tourism and the attitude of tourists when they visit China. Now if you have heard ‘White Noise’ on the Stiff Little Fingers album Inflammable Material then you will get what the breakneck ‘The Chinese Are Coming Again’ is about. If you haven’t heard it then give it a quick blast here. Its fair to say their still enormous mistrust of Chinese immigrants and here SMZB expose the bigots that would treat people as a mass rather than individuals. ‘Colonial Trip’ features a guest female vocalist and is reminescent of The Dubliners/Pogues until an electric guitar bursts in and we are brought up to the present day. A great song that nicely straddles both the past and present and even ends with some trumpet playing thrown in to the mix. ‘Tattoo The Earth’ again is more Poguesy while ‘Redemption Song’ takes Bob Marley’s original song and turns it into a celtic-punk classic with the pipes playing loud and proud. The Chinese Are Coming comes to an end with the absolutely stunning ‘Song Of The Seagull’. The longest track on the album, at well over seven minutes, its a tribute to Lin Zhao. A Chinese student from Peking University who was jailed in 1960 for pro-democracy activities. The song is based on a poem she wrote in prison where, forbidden to use pens, she composed countless articles and poems using a hairpin dipped in her own blood. In 1968 she was executed and in 1981 Lin was officially exonerated though the Chinese government still to this day are reluctant to allow any mention of her or her writings. Find out more about the tragic life of Lin Zhao here.

Beginning with just piano, acoustic guitar and the beautiful voice of their guest vocalist (sorry but I couldn’t find her name anywhere) before the full band kicks in with their tribute and some angry celtic-punk rock brings the curtain down on the song and the album. I simply cannot imagine a better way to end this album. A song dripping with emotion and meaning and that symbolises everything that SMZB stand for. 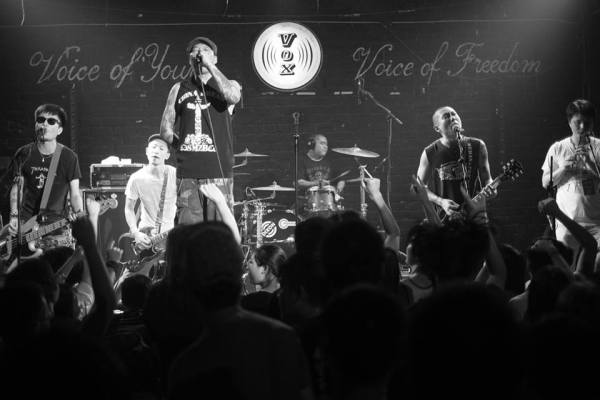 Fifteen tracks and over fifty minutes to boot that gives you more than enough for your money and if there is ever a band in the celtic-punk scene that demands your support than it is SMZB. Being the only celtic-punk band in your state or city can be a lonely experience but SMZB have become an icon of Chinese music that deserve to be heard far beyond their own country. What they have to say is important and we can be grateful that they have chosen to wrap it some of the best celtic-punk music you will hear.

(listen to The Chinese Are Coming for free by pressing play on the Bandcamp player below before splashing out your $10 on buying it and supporting this awesome band!)