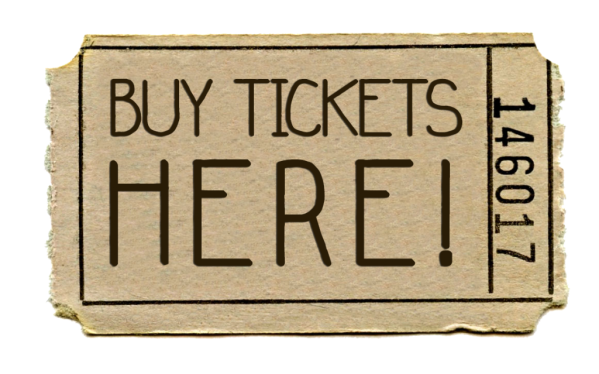 we are pleased to announce the headliners who will be making a very rare London appearance. The Wakes are a folk rock band from Glasgow, Scotland. The band’s sound is a mixture of Celtic traditional music fused with punk rock. The band’s lyrics embrace their culture, heritage and surroundings. They cover all manner of subjects from anti-fascist politics, immigration and unemployment to uprising and rebellion in Scotland, Ireland and beyond.
http://www.thewakes.info/

supports act will include
ANTO MORRA
the music of London Irish Celtic and QPR supporter Anto can be found somewhere between the Pogues and Ian Dury with a dash of Madness.
http://www.antomorra.com/

BUCKETS OF COURAGE
an old school streetpunk band made up of Celtic fans all the way from County Kilburn!
https://www.facebook.com/bucketsofcourage

our resident DJ Mr.GREENFORD BHOY will be spinning his ipod playing a whole host of celtic punk and rock, trad folk, rebel Irish and just plain auld rebel before, inbetween and after the bands.

more acts to be announced (and SPECIAL GUESTS to be confirmed!) so keep an eye out here…

the proceeds for the gig will go to the Clapton One. an anti-fascist Celtic supporter who was recently arrested unfairly in London and received a huge fine. lets show that we look after our own…

Entry is from 7-30pm and is £10 and advance tickets are available (click the giant ticket stub above). If their are any tickets left then it will be Pay On The Door. The gig will end at midnight.

The Water Rats is closed for refurbishment (thanks for telling us!) so we have had to move to The Cock Tavern, home of the Underground Celtic Supporters Club, literally just around the corner from Euston station and not far from the Water Rats either!
Plenty of trains, tubes and buses galore will get you back to pretty much anywhere all through the night. Map and some other shit here and here.

come down before the gig and join the infamous UNDERGROUND CELTIC SUPPORTERS CLUB for the Celtic v St Johnstone game which will be shown live in the pub at 3pm. 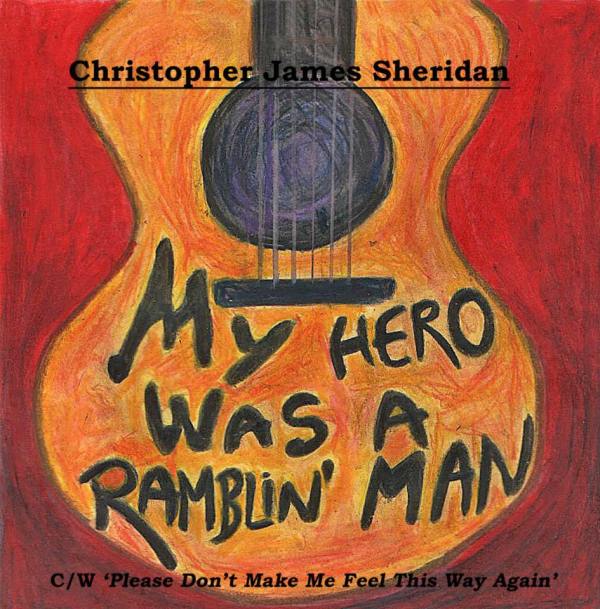 Boston has the Dropkicks, New York has Black 47, London has The Bible Code, LA has Flogging Molly and Glasgow’s Irish community has The Wakes. Christopher James Sheridan is a Scots-Irish singer songwriter from Glasgow and has played harmonica in folk’n’roll band The Wakes since they were formed back in 2006. This is Christopher’s second solo single, with ‘Old Fashioned Pound Notes’ released earlier this year.  You can read our review of that great single here.

‘My Hero Was A Ramblin Man’ is a tribute to the legendary American folk singer Woody Guthrie. Woody’s legacy is immense and he left behind untold amount of songs for children, politico’s and just plain folk. Most famous for the song ‘This Land Is Ours’ and for performing with ‘This Machine Kills Fascist’ emblazoned across his guitar. The legend of Woody Guthrie lives on. Like most of Christopher’s recordings its a simple but beautiful track totally understated but completely effecting. The B-Side ‘Please Dont Make Me Feel This Way Again’ has a traditional country flavoured twang and the kind of anguished and broken hearted lyrics you’d expect from a country song!

Two more beautiful solo tracks from Christopher and we’re waiting with baited breath for more. The download is available for only £1-58 so put your hands in your pocket!

we reviewed the excellent album ‘The Red And Green’ from The Wakes here. it was also voted 4th best celtic-punk album of 2013 by the London Celtic Punks crew here. 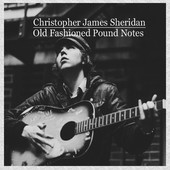 This is the debut solo record from Christopher James Sheridan, who spends the majority of his time playing the harmonica and guitar for the fantastic Glasgow Irish celtic-rockers The Wakes. Obviously influenced by the American and British folk scenes of the 50′s & 60′s, Christopher has been writing and performing his own material since 2003. This four track, 15 minute EP kicks off with the simple yet beautiful self titled track of uncomplicated nostalgia. ‘The Devil And Dying Men’ continues in the same stark way but with the addition of harmonica and country slide guitar in a bleak story of drug addition and suicide. ‘A Deeper Shade Of Blue’ is another sad song and most Dylanesque of the EP. Last song ‘She Cries Herself To Sleep’ continues the dour themes with just a voice and the piano. All together its a sublimely melancholic and emotional trip and as far away from The Wakes pumping anti-fascist terrace anthems as is possible. The Wakes are a great band and with talents like this within them they’re destined for bigger and better things. Christopher’s tunes are simple, without being easy, and sweet despite the sometimes sad lyrics and hopefully there will be plenty more to come.

we reviewed the excellent album ‘The Red And Green’ from The Wakes here. it was also voted 4th best celtic-punk album of the year by the London Celtic Punks crew here.

a Glasgow based folk’n’roll bunch of hooligans and outlaws. They might all be Jock Tamson’s bairns but their Mammy is Roisin Dubh!

I know that not every band can survive through its third release, sometimes its just like sequels to movies that you once liked. You wish that they had just released the debut and then called it quits. But with The Wakes, you realize that you have discovered a band that only gets better with each release, and this ‘The Red and The Green’ is proof positive that The Wakes are here to stay, to keep you dancing, boxing, drinking, thinking and demanding more of their unique Glaswegian euphony. So I felt obligated to share my strong feelings about this CD and review which is a stupendous third release by The Wakes, with an awesome cover that gives tribute to revolutionary Scot and Clydesider, John Maclean, a man whom would feel at home with these Rebel rockers, known as The Wakes.
There are musicians whose sounds are bound to cause a riot, and if not a riot, than at least a good fight, the spirit of their music so moving that you are ready to wage war. Dropkick Murphys or The Battering Ram, led by legendary crooner and balladeer, Declan Hunt, qualify in that regard, while other bands might make you sentimental, thinking back to those ‘glory days’ of yore. Other musicians write songs that make you want to cry, their ballads so heart-breaking that you can literally feel the pain of the man or woman that the musician is singing about. Johnny Cash or Christy Moore come to mind. And there are not too many bands that can combine that fighting spirit with that distinctively Irish, poignant feeling, like these Rebel Glaswegians, known as The Wakes.

‘Colours’ , the first tune on this shining example of Glasgow-Irish Rock n’ Reel that is ‘The Red and The Green’, is a moving tune about hate and the walls that are built up by the State and society, to divide us all. Here , The Wakes, call to battle is a call to tear down those walls, and let peace and the brotherhood of man, prevail, even if momentarily. And even though I have never been a believer in utopian ideas like ‘World Peace’ or the idea that Big Business is building jobs for you and me (dream on suckers, they are outsourcing your job to China, as we speak), I like the sentiments, because all The Wakes are really saying is to not judge a book by its cover, don’t judge someone simply because they are different, don’t assume that all Protestants are Loyalists, or that all muslims are in Al Qaeda, or that all supporters of West Ham United are wankers. Ha Ha. Lead vocalist and guitarist, Paul, can really croon and reminds his fellow Glaswegians

“This is our city and these are our colours…”

Afterwards, Eamonnn’s thunderous drumming and Chris Crooky’s flute finesse take us to the goldfields of 1849, where its ‘To Hell or California’ because we aren’t going to live forever, and we might as well risk it all for the chance of a lifetime to rise from our grim poverty by striking it rich. A mighty and upbeat tune that will make you want to dance a merry jig on the skull of Maggie Thatcher. And you can just blame The Wakes, because ladies and gents, they have that kind of infectious rhythm that drive a man to dance, rather than drink.
Next, ‘Men To Be Feared’ reminds us of a rougher day in Irish-American history where law held less sway than the law of the gun, and where men, lived by the creed

A song that is probably my favourite on this kick ass album, another historical fighters anthem that brings to mind the gangs of the 5 Points, circa 1857, and the legendary battle between the Bowery Boys and the Dead Rabbits on Mulberry Street on July 4th, 1857, in New York’s , Lower East Side. As the song goes

“Baptized in blood….We live to fight another day !” 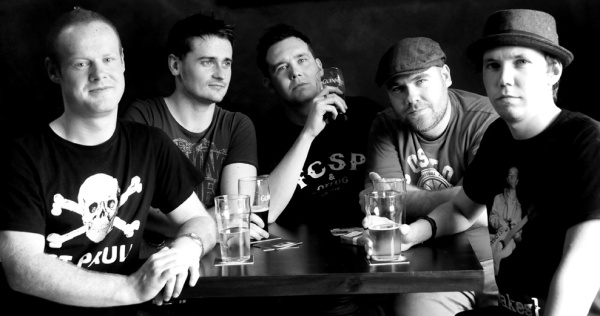 There are so many magnificent melodies and Fenian harmonies on this amazing CD that its difficult to pick favourites, but after ‘Men To Be Feared’, which rates as my #1 brawlers tune, their stellar version of ‘Peat Bog Soldiers’ must be noted as one of the finest versions I’ve heard yet, and I would be remiss not to give accolades to Christopher James, whose harmonica really made this tune so damn beautiful to your ears. Not to mention the powerful chorus sung throughout this marvellous battle hymn.
But, ‘John Macleans March’ really must be remembered with special recognition, possibly being a tie with  ‘Men To Be Feared’ as the top tune of 2013, and 2014. it’s the kind of tune that brings the Rebel Spirit of the Red Clydeside to your living room with surround sound and marching feet, chanting slogans of protest and solidarity, as you feel like you are marching against recruitment for the British Army with John Maclean himself, and I know that this tune would make him proud, if he was still with us, as it’s a jubilant reminder that the fighting Celtic spirit of Glasgow is still alive and kicking !

For More On John Maclean