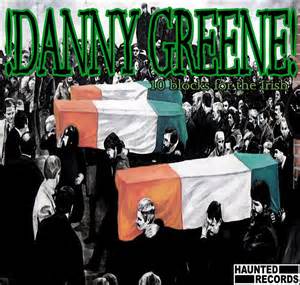 Well those of you of a nervous disposition better turn away now as Danny Greene may well be responsible for doing some serious damage to your sensibilities! We have of late neglected the punkier side of celtic-punk and we are more than making up for it by reviewing the new album of American hardcore band Danny Greene. Named in honour of the legendary Irish-American gangster the name suits them well and the blistering noise attack would I am sure have gotten Danny’s approval. The album starts with ’10 Blocks For The Irish’ and those of you in the know will instantly recognise the intro before Sean Penn as Terry Noonan in the excellent Irish-American gangster film State Of Grace takes over and then wham… fast as hell hardcore comes straight at you. For those of you who like the folkier side of things give this a listen and shake the old cob-webs away. There is nothing too overly spectacular here just superbly well played old fashioned hardcore music with shed load’s of energy and more fist in the air moments than a million chart bands could ever dream of. The song last’s just over a minute so brace yourselves.

‘Two Faced’ follows and carries on in the same relentless vein as before. I was always a fan of more old style hardcore or, as my mate Steve Caveman always called it, “that stop and start shit” and so this album really hits home for me. My album favourite is ‘No Quit In Me’ which for you punk traditionalists is probably the easiest song here to listen to. Chugging guitars and a great chorus of

‘Broken’ and ‘Bottom Of Barrel’ continue the approach and the songs are much longer so Danny Greene are able to expand a bit on their sound.

The albums longest track is ‘Walking Dead’ at only just over three minutes and is also one of the albums stand outs.

‘Vick’ is about the American Football quarterback Michael Vick who went to jail in 2007 for promoting, funding and facilitating a dog fighting ring on his property. This sick bastard had also engaged in hanging and drowning dogs who did not perform well. Rightly Danny Greene put the boot right into him and it is heartening to see his career has gone to shit since he was jailed.

“you fucking coward, you worthless piece of shit”

‘What Is Truth’ brings the album to a close and is a collaboration with the bands friend and rapper Joe Myles. A hip-hop/hardcore mix up that really works. Obviously ’10 Blocks For The Irish’ will not appeal to everyone out there but if you do like fast hardcore punk you are gonna love this. If you just like the idea of an Irish-American band who will NEVER have a banjo player then, again, this IS the band for you. The boys will be releasing a full-length album soon called Heritage so keep an eye out on the internet and here as I have a feeling its going to get another fantastic review!

*Find out more about the legend that was Danny Greene, an impoverished but charismatic young Irish-American who rises to power as president of the longshoreman’s local union and is charged with corruption but evades serious jail time by becoming an FBI informant. With fearless nerve he joins forces with a Mafia gangster to rise to power in Cleveland’s underworld, gaining the reputation of a Robin Hood-like figure with nine lives as he escapes countless assassination attempts.

Danny Greene: The Rise and Fall of the Irishman

Photographs that have never been seen before and exclusive interviews with the family members of Danny Greene, officials from the Federal government, associates of the Mafia and representatives of Cleveland Police Enforcement make up this documentary examining the life of the legendary and infamous Irish-American gangster Danny Greene.

“Feeding America’s appetite for mob stories with a grisly slice of Cleveland’s criminal past, spotlights the gangster whose life was famously extinguished by a car bomb in a Lyndhurst parking lot. A fearless hood who grabbed headlines for years in the 1970s, Greene was a colorful character. He dressed in green, drove green cars, and embraced Irish history and Celtic lore. Alternately a union troubleshooter, embezzler, and enforcer, Greene dabbled in racketeering, gambling, and loan-sharking. He excelled at beating the rap, which may have been attributed to his other occupation: FBI informant. Police have long assumed that Greene conspired to take out Shondor Birns, a rival in Cleveland’s numbers racket, and later mafia underboss Leo ‘Lips’ Moceri, whose body was never found” 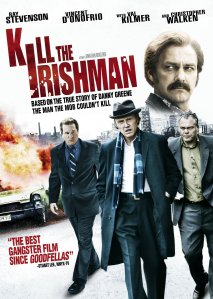 for a link to watch ‘Kill The Irishman’ simply click on the film poster on the left and you will be re-directed. if the link is broken leave a comment below and well try and fix it.