The Babes are a trio of London celtic-punk misfits that play fast and punky Poguesy type music… and with just drums, bass and bagpipes!

In a small scene such as ours over here in Blighty it’s always brilliant news to hear of another celtic-punk band joining the fold and we were over the moon earlier this year to get The Babes on board the London Celtic Punk scene. Announcing their arrival with a series of gigs around London it took a while for us to catch them live but we did sit up and take notice of a bunch of well made and edited You Tube videos that impressed us straight away so we roped them into supporting Headsticks and Under A Banner at The Water Rats. There they blew the crowd away with what can only be described as celtic-crust music! Snotty, two fingers in the air, DIY punk rock with bagpipes and a massive stage presence. Having your guitarist leave just before a big gig the easiest decision would be to cancel but The Babes said hell no and instead went on to play half an hour of fast as hell with only drums, bass and pipes! 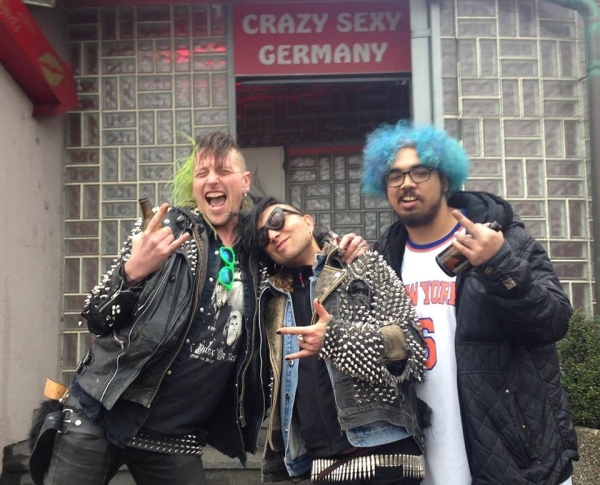 The guys met at the IMW sound engineering school in East London and soon via a garage in Twickenham, South West London it wasn’t long before The Babes were delivered. Bringing together Colombian, American and English backgrounds and featuring ex-members of punk legends Total Chaos and Blitz they have already played more gigs than most band who have been together much longer and have embarked on two extensive tours of Europe as well. They are literally just back from their most recent Euro tour promoting this album which took them to Brittany, France, Switzerland, Holland and Belgium and with no let up they hit the boards again in London straight after and head off again next month to Catalonia and Spain for a few dates.

Greetings From London has been self produced and funded by the band and is a real achievement for them. The physical CD comes in a rather nifty jewel case with a beautiful huge full colour booklet with lyrics and photos and all sorts of stuff. Very nice it is too. But what about the music? Well the album kicks off with ‘The Awakening’ an instrumental that starts with very much a traditional Gaelic feel to it before the band slowly join in and take it up to the end and for once are a bit restrained and the album gets off to a fantastic start. The next track, ‘Gold Star’ again begins with the pipes loud and proud and Mao’s voice and strong accent driving it along but no sign so far as yet of what The Babes are best known for. I have to say at this point so that I don’t repeat myself throughout the review after each song that the bagpipes on this album by Mao are absolutely fantastic. A native of Colombia he has certainly learnt well and the pipes are a great addition to the solid punk rock fare. By the way the band have given up ‘Gold Star’ as a free download so simply click below to get the track for free.

A couple of short ninety second songs follow in ‘Down Here’ and ‘Do Something’ and the band that springs to mind here are definitely the Bristol based drunken crusty punk band Disorder, who John Peel once famously described as “sounding like Triumph Bonneville motorbikes”. I came across Disorder as a ten year old Sham 69 fan who use to spend his weekly pocket money on punk singles but was so impressed one day by the sheer number of songs on one single in particular (and the cheap price!) that he bought it without listening took it home and got shouted at my his Mam and Dad when he put it on. To say it made Sham look like the Bay City Rollers would be an understatement! Best song so far is up next and ‘Lima Limon’ has plenty of energy and fire in the belly and even when you listen to it you completely forget that there’s no electric guitar here. For a three piece band they certainly fill out the space extremely well and are all great musicians in their own right. When I saw The Babes recently play Matt the bassist explained the significance of the song ‘Song of Finola’ and it was very interesting but beer has clouded my memory and all I can remember is that it was an Irish story. The pipes drive the tune along and Matts vocals seem distant while the song floats along. A superb track and here I find myself having to say that sure I don’t think that Greetings From London will appeal to everyone in the celtic-punk scene but then this is not yer typical celtic-punk album and The Babes are not yer typical celtic-punk band either. Next up is ‘Rampton Song’ originally written by and the lead song on that EP I bought thirty odd years ago by Disorder. Fast and over in a flash of ninety three seconds and The Babes have chopped and changed the song making it their own.

Thundering bass dominates here and live I can tell you it’s bloody crowd pleaser. ‘Kids’ doesn’t last much longer before ‘Dandelion’ and Mao and Matt share vocals and lyrics in Spanish and English. Next up it’s the album’s highlight which is without doubt ‘Tomorrow Seems So Far Away’. Released as the first single from Greetings From London and on hearing it I straight away knew they were onto a winner.

Promoting ‘Tomorrow Seems So Far Away’ took them on their first tour ‘The Babes Invade Mainland Europe’ where they had the opportunity to visit France, Germany, Belgium and Holland. Positive lyrics and a killer tune with stunning piping and that thundering bass thundering away it’s a complete tune and if you like this song then you are going to fecking love the rest of them.

“Tomorrow seems so far away,

why don’t we live for today?

When yesterday is all said and done,

why don’t we just have some fun?”

We nearing up to the end now with just two songs left and the short ‘The Choice Is Up To You’ takes us through to ‘Chia Sue’ and the album ends on a high with a punk rock masterpiece taking all the things that The Babes are good at and throwing them back to us.

As you can imagine for a band that met at sound engineering school the sound here is immaculate with plenty of power and oomft without being over produced at all. A really good job by Mao who engineered, produced, mixed and mastered the whole thing ably assisted by Colin Smith, David Clark Allen and Sean Bartle. As said The Babes may not be everyone’s cup of tea as they are most firmly planted on the punk rock side of the celtic-punk scene and they aint a lot of folk music going on here after that first song! Though as an old and greying punk rock misfit myself I blooming loved it. The energy is boundless and infectious and if maybe The Babes are best experienced live they have done as good a job as could ever be done in transferring that live sound onto disc. Greetings From London is a refreshingly raw album that goes to show that their is still plenty of room in the celtic-punk scene and it’s not all played out. Just as you think the scene has got stale and there’s never going to be another band coming along that doesn’t instantly remind you of something else then one appears and this time it’s The Babes.

From The Band here or here and All Ages Records in Camden.