“So tattoo our arms and raise our glasses, call out your name at New Year’s Eve, maybe next time we kneel at a casket, we can say at least the story’s complete”

Folk punk can get a bad rap. Out on the internet there are thousands of bad recordings of badly sung and badly played songs about Things That Are Bad (™). Songs that lack nuance, metaphor and melody. Then there was Erik Petersen. He was different, he was the master of crafting a song around an ancient melody, turning a phrase, and constructing a tale full of metaphor, life, death and everything in between. It breaks my heart to be writing an obituary for Erik, he was one of my heros, he was a friend, and above everything else he was a genius.

Erik was a long time player in the Philadelphia punk scene. His band The Orphans split up in 2000, but not before writing some amazing slices of hardcore (check out The Government Stole My Germs CD from their Raise The Youth anthology). Near the end of The Orphans, a shut down show might mean Erik grabbing an acoustic guitar and playing some unplugged songs instead. There is a show on Youtube from a veterans hall, a young Erik sits on a chair in the middle of a room of punks playing early versions of songs that would go on to be Mischief Brew. Erik, himself, had commented that this scratchy footage was the start of Mischief Brew.

Between The Orphans and Mischief Brew there was the Kettle Rebellion. The Kettle Rebellion was a tight three piece of Erik, Jon Foy on Bass and Chris Doc Kulp on drums. They played a style that could be described as Medieval Folk Punk, the kind of hardcore that you’d hear while you strolled through a renaissance fair. An eight track LP was recorded in 2002, but before it could be released, the master tapes were stolen and leaked to archaic MP3 sharing sight Soulseek. In response, Erik scrapped the project. Years later, he stumbled across a version of the master tapes and decided to put it out. In 2013, the Kettle Rebellion LP was finally released through Fistolo on Vinyl, and my own record label, Different Circle Records, on CD.

Erik and Mischief Brew were DIY to the core, and before going on with the story, I have to introduce Denise. Denise was Erik’s wife and partner in crime for over 20 years. Emails sent through to Fistolo would invariably be responded by Denise. She’s a wonderful small package of vibrancy, smiles and energy. There’s also the Pugs, a Mischief Brew article is not complete without bringing up the Pugs. The Petersens rehomed many pugs through the years, and they were a common feature at their American shows. Check out the early recording of Erik playing at a PunX Picnic and you’ll hear one of them, perhaps Garcia, yelping along to Erik’s genius. Up the Pugs.

In 2003, Erik released a split record with Robert Blake entitled Bellingham/Philadelphia, and also a more electric EP known as Bakenal. These were the start of the Mischief Brew sound that the underground world would associate with Petersen. It was on the Bakenal EP that the anthem “Roll Me Through the Gates of Hell” first appeared, with it’s rally cry of “I am a leader but you will not follow me” providing the spit and sawdust that anarcho-folk had been looking for. Lyrics from this song would be sprayed across walls around the world, most prominently across the outer wall of the Squat-cum-Social-Centre Knoflook in Den Bosch, Netherlands. Footage of Erik standing on the bar at Knoflook (during their last Europe Tour in 2008) singing Jawbreaker’s Boxcar can be found on YouTube. It’s a moment of pure joy, and testament to how he could command a room with his guitar.

Mischief Brew had a few line-up changes through the years, finally settling on a three-piece core of Erik, Shawn St Clair on Bass and Erik’s brother Chris Petersen on drums. Occasionally they’d be joined by Kettle Rebellion’s drummer Doc on percussion and second guitar duties. They released albums infrequently, but at a pace that was slowly increasing in recent years. The initial full length, Smash The Windows, was released in 2005, with its smash the system electric folk punk featuring guest spots from Stza from Leftover Crack and Franz Nicolay (solo artist and past member of The Hold Steady). Featuring a reworked Kettle Rebellion track called A Liquor Never Brewed and a full band Roll Me Through The Gates of Hell, this is the place to start with Mischief Brew.

From there we got Songs from under the sink (an acoustic collection of ‘forgotten’ old songs), The Stone Operation (a European influenced carnaval of a record) and the latest This is Not For Children (their punk rock roots coming to the fore). In between there was a smattering of EPs, the greatest of these being Eriks side of Photographs from the Shoebox (a split with Joe Jack Talcum). On this EP, you will find Labour Day Massacre, one of the prime examples of Erik’s socially conscious political songwriting. 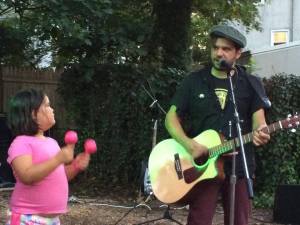 Mischief Brew played a lot of shows in America. From small cafes with acoustic guitars in front of a close crowd,  to an audience of thousands at the NYC Bowery Ballroom with The Hold Steady. They toured Europe twice, the last time in 2008 and were about to start another visit here next week. Youtube is a library of live performances, but that only gives you an impression of what it was like to be there.

I’ll finish this with a story about the last time I saw Erik, Denise and Mischief Brew. I found myself living in Brooklyn in 2013 and feeling quite homesick. Mischief Brew had a show booked at a dive bar called Grand Victory which I had frequented a few times. I went along, expecting a small turn-out and to hear some of my favourite songs belted out. I hadn’t seen them since 2008 when they had played in Glasgow (on borrowed guitars due to a fuck-up by the airline), but soon bumped into Chris and Shawn as if it had been yesterday.

There must have been around 200 showing up to this bar show, DaysNDays and Absinth Rose supported, and it was life affirming. From opening with Children Play with Matches to the closing anarchy of Roll me Through the Gates of hell, I was sweaty, hoarse throated and absolutely elated. I headed to the merch desk to buy a vinyl copy of the Stone Operation, and when hearing my thick scottish accent, Denise automatically recognised who I was and the night truly started. I sat at the end of the bar, unending stream of whisky, with Erik, Denise, Shawn, Chris, Doc and Maria (Denise’s sister). They invited me back to Maria’s flat with them for more drinks and merriment. Erik and Shawn drove ahead with the gear and we stayed at the bar to finish our drinks.

By the time we arrived at Maria’s, Erik and Shawn were asleep on the sofas with three pugs dancing around the apartment. The rest of us stayed up a while in the kitchen, drank fruit flavoured beer, and I felt like I truly belonged. I went to sleep on the floor with a pillow that was given to me, but awoke with a blanket over me and a pug on my head. Once we were all awake, we sat around and chatted about life, music, and plans. We ordered burgers, ate, and bid our farewells as I ventured out in the hot Brooklyn sun. I’d lost a day, but gained a life time.

I’m sitting writing this in a flat in Paisley, Scotland, with my Mischief Brew T-shirt (bought at the show in Brooklyn), my “May All We Do Be All For Our Delight” tattoo on my arm, trying to comprehend where we go from here. Erik Petersen soundtracked my last 10 years, gave me inspiration for my own songwriting and journey, bonded me with some of my closest friends, and gave me something to strive towards. No Gods, No Masters, No Setlists.

Fair Well Good Fellow, the tape has slowed down, but the music won’t stop.

Friends of Erik have set up a GoFundMe campaign to raise funds for his wife and family to help get them through all this without the added worry of funeral expenses and to help them get by in this tough time. All of the money raised will be given to his wife, Denise. The campaign can be found here so donate if you can and if you can’t then please share.