Tag Archives: Half Man Half Biscuit

ALBUM REVIEW: STEVE WHITE AND THE PROTEST FAMILY- ‘This Band Is Sick’ (2014) 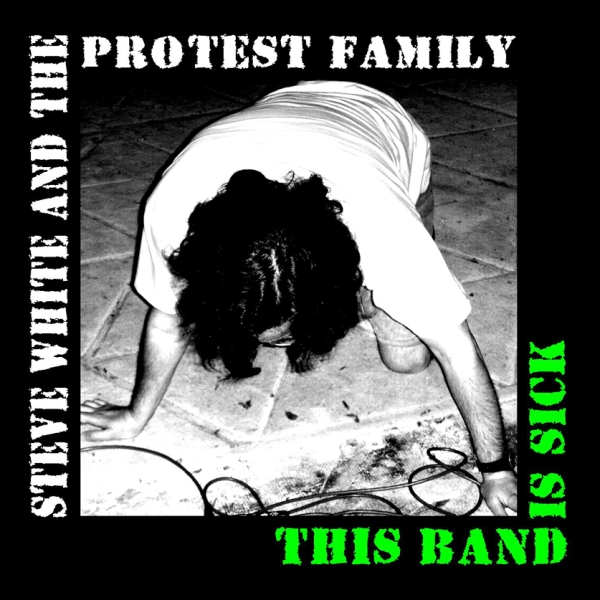 Similar to them Tories who end up investigating companies that they have in fact got £100,000 worth of shares in, I feel I must own up to something before my review begins. Arriving in London 24 years ago I did my best to follow my home team but it just wasn’t enough for this football addict so I began to cast my net out for someone else to go to watch. Without going into all the details (but it did all start with free tickets!!!) I began going to see Leyton Orient. Back then they were in Division Three and in the years since they’ve had a couple of promotions and relegation’s but have never risen above that third tier of english footy. Standing on the terraces back then I never imagined that eventually they would become my first team, eclipsing both my home team and Celtic. There’s been ups and down. Few more of one than the other but that’s football for you. We can’t all support Chelsea or Manchester City. One of the many things that drew me to Orient was the supporters (I save the term ‘fans’ for yer barstoolers or schoolkids who support teams hundreds of miles away from them that they’ll never get to see). On the terraces back then were people from all over England in the same boat as me. Miles from home and washed up at the at a not so wee ground in London E10. Punks, hippies and metallers were dotted about the ground as were lefties everywhere. Once I said hello to a young lad wearing a James Connolly t-shirt. That’s how I was sucked in and the O’s are a part of me now…

So why the hell am I waxing on about a lower league football team that can’t even get 5,000 in to watch them when they were (briefly) top of the league? Well the reason my friends is Steve White And The Protest Family. A quick glance at the band logo will give some of you the answer. These boys are full on Leyton Orient supporters and can be found propping up the bar in the Supporters Club at the ground before and after O’s games and even away games too, though whether or not they went to Bradford City that time I do not know. Meeting Steve many times and having checked out their videos I determined to draw them into London Celtic Punks orbit. We booked them for a couple of gigs and they went down a storm with their distinctive brand of English folk-punk and socialist and football anthems.

The bands official beginning was at Tommy Flynn’s in Camden on the 3rd December 2009 and ‘This Band Is Sick’ is their third release after a live album ‘One Night In Walthamstow’ recorded in 2010 at the Rose And Crown the day after the 2010 general election. With the Tories about to wage war on the working classes and finish off what Thatcher had started its a great record full of bile and humour and anger. Sadly they’ve been proved right about everything they predicted… 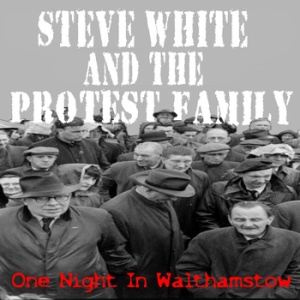 ‘One Night’ was followed by the studio mini-album  ‘Drums Ruin Everything’ from 2012. ‘Drums Ruin Everything’ gets it title because they don’t and never have had a drummer. Eight tracks that set the style for this new album. Football, politics, football, politics and politics. All done with lashings of humour and personality. To download either album click on the links below the respective album covers above. Its £1 for both and one of them is free!!!

The band consists of Steve- Guitar, Irish bouzouki, harmonica, vocals, Doug- Bass, vocals, Russ- Banjo, vocals, Funky Lol- Mandolin, guitars, violin, piano, vocals. Though you’d never really be sure as they have people guesting for them regularly and even though there’s officially only four members I’ve seen them play with more than double that! 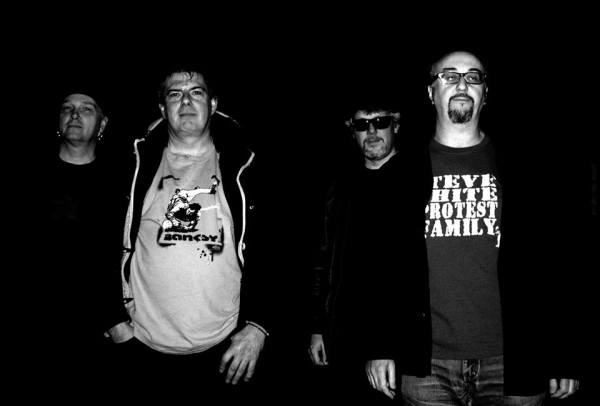 So now I’ve come clean on my connection to the band I cannot be accused of bias when I tell you that ‘This Band Is Sick’ is the proverbial bee’s knees! It kicks off, literally, with ‘No Pasaran In E17’ which tells the story of the far-right English Defence League’s ill fated trip to Walthamstow to hold a demonstration. The vast majority of EDL members made the sensible decision to bottle it and never come but those that did were met with a huge force of locals determined to prevent them from marching and they were harried and harassed at every turn and afterwards slunk off back to where they came from having had been well and truly embarrassed. As with all the following tracks the vocals are extremely clear and as east London (or should that be “east east east London”?) as you can get with the bands up front and forthright views.

“you can stick your racist hatred up your arse”

Acoustic guitar and mandolin lead the music but really its Steve voice that really dominates proceedings. ‘Do Something About It’ name checks the bands influences and is a plea for the left to stop its sectarianism and work together. A lovely thought but something the left is incapable of doing unfortunately. Who knows what we could achieve if we were united and all worked as equals together. Too many chiefs and not enough Indians is the phrase that fits the Brit Left perfectly with all the various groups and sects putting themselves above the class they pretend to serve. ‘Home Rule For Awesomestow’ brings in the harmonica and is lovely wee ditty about the home of the band, even bigging up their local Labour MP. ‘Ecstasy Death Girl’ proves the band can do serious with Lol taking over vocal duties for the story of a young lass who had died and the medias portrayal of her death and the prejudices they hold against the working classes in general. Quite rightly the song tells us not to buy the Daily Mail and ends with the sad and poignant line “poor Isabelle”.  Two whispered words more poignant than the 100’s of acres of news coverage the Daily Mail printed on the subject. Electric guitars pop in ‘Smash It Up (And Start Again)’ a song that tries to tell explain what we’ll do when the revolution comes. ‘Bad Day For Bojo’ is about the RMT, unions and everyone’s least favourite Eton boy (after Frank Turner that is!). A upbeat tune it’s banjo led and a real toe tapper. ‘Funky Lol’s Picket Line’ is about the necessity of NEVER crossing picket lines…EVER! ‘Never Mind Your Bollocks’ is that unusual song subject of testicular cancer and extolling the virtues of

“having a quick feel it aint worth ignoring”

‘(When An) Anarchist (Helps You Across The Road)’ begins with loud punky guitars and soon racks up the volume with a typical Family tune and lyrics. The stand out track of the album for me. Very funny with brilliant lyrics and music. Next is ‘Which Side Are You On?’, a song readers of this blog will be most familiar with due to the likes of The Dropkick Murphys and Billy Bragg , among others, covering it over the years. Written back in 1931 by Florence Reece and made most popular by the late and great Pete Seeger its a song bursting with both class hatred and class pride.  Steve’s updated lyrics are in the tradition of those mentioned and are a welcome addition to the song’s grand history

“I’m on the side of the unions,

on the side of the strikers

On the side of the disabled,

On the side of the worker,

not the side of the boss

I’m on the side of the sick,

The folk who can’t make their Wonga repayments

On the side of council workers who had their jobs axed

On the side of Uncut,

I’m on the side of Occupy

It’s rich versus poor if you just open your eyes

I hear people say a change is gonna come

So ask yourself which side are you on”

The final track (and hidden track- sorry for spoiling the surprise!) is The Family’s legendary anthem ‘Brisbane Road’. A story of love, unrequited love, hatred, dreams, dashed dreams and football. Yeah Brisbane Road is of course the home of Leyton Orient and close your eyes and a listen to this song will whisk you over to East London at 2-45pm running across Coronation Gardens. Whether its the drinks with no lids or getting The Orientear fanzine and a pint in the South Stand Bar at half-time and then missing the first five minutes of the second half but its that thing of praying to hear Status Quo at quarter to five that brings a smile to this face.

Twelve tracks in all and only a few seconds short of forty minutes. ‘This Band Is Sick’ may not have instant appeal for many of our European readers but you’d be wise to give it a chance. The lyrics are multi-layered in the same way Half Man Half Biscuit’s are in that you may listen as close as you can to the words but you’ll always discover a line you never heard before that will raise a smile or two. Shame the CD comes in a pretty basic cardboard cover but thats a small gripe as i already mentioned there’s no need for the lyrics as its very easy to understand Steve even when he really gets going! The album is released today so hightail it over to their Bandcamp page (link below) and get ‘This Band Is Sick’ as this band may be sick but they are fecking brilliant too!

here’s the recently released double-A side with Graham Larkbey And The Escapers. It’s all free but limited to 200 copies so when their gone contact the band…

here’s the band recorded just a couple of weeks ago with some John Otway at the end you lucky things!